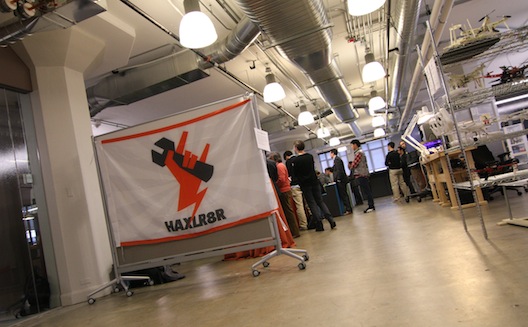 HAXLR8R, the hardware-focused startup accelerator based between San Francisco and Shenzhen, China, hosted its third demo day last November, to resounding success - something the HAXLR8R team and their companies are seeing more of these days. Before demo day, two companies in the latest graduating class, PetCube and Everpurse, had already closed some seed funding and raised non-dilutive capital online via Kickstarter, founders Sean O’Sullivan and Cyril Ebersweiler told The Wall Street Journal.

Further, as of the close of its Kickstarter campaign yesterday, Lebanon's Roadie Tuner, a member of the accelerator's class of 2013, raised its original goal of $60,000 USD almost three times over. Palette, another 2013 HAXLR8R company, has raised nearly 1.5 times its original $100,000 CAD goal, and Vigo has 27 more days to reach its $50,000 USD goal (it's already raised $34,000). (Disclosure: Wamda CEO Habib Haddad is a mentor in the HAXLR8R program.)

Wamda quizzed Ebersweiler recently about the incredible success HAXLR8R has enjoyed in its short life, trends he’s seeing in the gadgetry people are interested in, and what life is like for entrepreneurs working out of Shenzhen, China.

After your successful third round (not to mention your first and second), what trends are you seeing in how people want to invest and what they want to buy?

On the consumer side, there is still a huge appetite for novelties as a lot of people are being transformed into early adopters once they get a smartphone. Crowdfunding campaigns are still popular but we observe some kind of 'fatigue' as everyone is getting a better understanding about the risks involved, or delays in getting their products. This leads some consumers to wait, instead of helping to get those products to market.

On the investor side, there is certainly a stronger appetite than in the past, but a lot of the rounds are happening 'after the battle' – that is to say the funding goes to companies which already have more than a million dollars in revenue (through campaigns or not). When things are more risky or not entirely proven, investors are still sitting on the fence and letting entrepreneurs traverse the 'bridge of death' that awaits hardware startups post crowdfunding campaigns [on their own].

What trends in gadgetry are you seeing?

2013 was definitely the year of the wearables and activity trackers of all kinds, but in reality there are only a few on the market at the moment. The second iterations on this kind of hardware will be interesting to watch as they will benefit from consumer input.

In 2014 we will hear more about Head Mounted Displays and their correlative Augmented Reality / Virtual Reality, then ways to interact with them (through gesture e.g.), as well as more robots, which are benefiting from the trends and are getting cheaper by the day. Later on we'll see a chunk of startups focus on B2B, not unlike what we saw in mobile.

Tell us about some of your most exciting new body monitoring gadgets.

I'm impressed with the Fitbit Force, which is a simple gadget but really well crafted. I'm excited about the sleep monitoring space, the brain activity space (Melon for example) and the devices which will be able to tell us more about our general fitness status (Vigo is a shot at that with its 'fuel gauge').

HAXLR8R has had a fascinating - and lucrative - relationship with Kickstarter and its audience. Tell us a little about it, and where you see this relationship heading in 2014.

When we are doing our 'job' correctly, we are the ideal no-headache partner for Kickstarter. But overall I think they've been very supportive to everyone, and the same goes for Indiegogo and others I'm sure. We are platform and launch agnostic: startups decide what they want to do and where. It's their company. Our goal is to make sure they are successful no matter what.

Has it been difficult to convince entrepreneurs to come to China? Surely this has changed as HAXLR8R has seen more and more success; how would you characterize the shift?

It's never been really hard to convince those who applied to come over: they were already kinda nuts. They understand what we are doing, and why building your own supply chain matters, why prototyping in Shenzhen is awesome, or why experiential learning is useful.

One thing that is certain: it used to be a whole lot harder to evolve in China. The first HAXLR8R batch had it rough, but helped us to identify something essential: people are not here on a culture trip, they are here to build a product in a record time. So we've done everything we could to smooth the ride, while getting everyone ready to rock. It used to take us more than a month to get to the level where entrepreneurs would feel comfortable, and I think we've nailed the process so much that after ten days people are running around, fearless.

What kind of cultural divides have the HAXLR8R team as well as its entrepreneurs experienced given that most of these people aren't from Shezhen? What steps has HAXLR8R made to ease the process of acculturation? Have the cultural differences led to any surprising outcomes?

Shenzhen is rather forgiving since, after all, tens of thousands of foreigners have come over the last 20 years to do business here. So you'll find whatever you need as a foreigner, and more. We are doing a lot from the get go, like setting up bank accounts, finding accommodation, recommending places to eat and have fun, having team building and sports events... The idea is that the day they arrive, they find a home (since we provide the office space and workshop for free), and 'feel' home.

Overall, the tide is rising and while the teams will have to fight for more attention and backers' dollars, it's truly amazing to watch products making us better humans.

In addition to HAXLR8R, Wamda loves hardware: the Wamda Fund has invested in Instabeat, Lebanon's own wearable, waterproof heartrate monitor. CEO Habib Haddad invites those interested to contact him regarding his mentorship duties with HAXLR8R. He can be reached at habib@wamda.com.