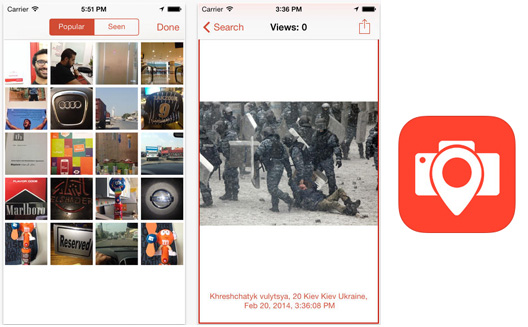 During a heated political debate that took place in Cairo after the events of June 30th 2013, three Egyptians, freshly graduated from university realized that most of the graphic evidence for political events in their country, from news outlets to activists’ tweets, was either falsified or impossible to verify. In an attempt to counteract this trend, Zeyad Salloum came up with the idea for Mapture, an app that tags date, time, and location, and stamps it on a map. This information is anonymously collected and stamped on the image/video along with the app’s icon, so the viewer knows it has been verified.

After working on the idea for about half a year, he launched the iOS app in March together with his two long-time friends Bahaa Hashem and Belal Eid.

“We found that a platform that verifies the authenticity and source of content did not exist, even though numerous incidents in the news and on social networks suggest that we desperately need one,” says Hashem, explaining the perceived gap in the market they seek to fill.

Seeking funding for their project, the Mapture team applied, and were accepted, to Egyptian startup accelerator Flat6Labs, whose spring 2014 cycle began in February. The accelerator has so far provided them with their initial round of funding for the four-month duration of the cycle. The team is currently searching for new potential investors to fund a planned expansion.

Many recently launched mobile devices, not to mention apps and websites, already tag images and videos users shoot with meta-data and location information. Hashem addresses this point saying, “You can also compare us to the more traditional content sharing applications like Instagram, Twitter, and Facebook. But we're not striving to be a social network like them. Our goal is to become a tool to view and [capture] verified content.”

“Additionally, the fact that we verify the date, time, and location from our servers and GPS, and stamp this information on the content differentiates us, in a day and age where content is uploaded and shared without questioning where and when it came from,” he adds.

It’s been a month since Mapture launched on iOS App Store, and while it’s still very early to judge how the app will perform, Hashem tells us they counted approximately 500 downloads from 19 different countries in the two weeks following the app’s launch.

When Mapture launches on Android, the team will pursue a freemium revenue model, i.e. allowing users to download the app for free, while offering additional features for purchase within the app. “We have yet to implement this feature, since the app is in its very early phase, so we are not profitable as of yet,” Hashem says.