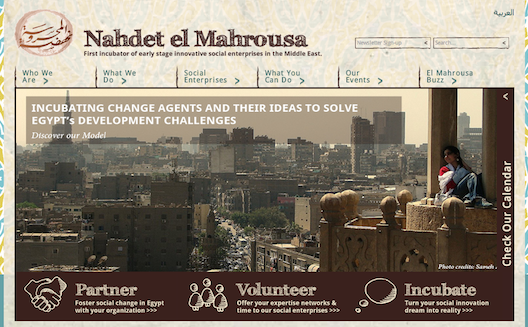 After three years of political turmoil, the economy of Egypt is suffering from a lack of stability that was translated into a remarkable increase in unemployment, which last year reached 13.4%. That’s 3.7 million people without a job, according to the Central Agency for Public Mobilization and Statistics.

This has been strong motivation for Nahdet El Mahrousa, an NGO seeking to activate social entrepreneurship ideas, to announce its cooperation with Barclays Egypt to fight unemployment in Egypt by supporting startups, through the Social Innovation for Employment contest.

Barclays Bank sees support of the entrepreneurship sector as key to the future of Egypt’s economy. “The crisis of employment was our first motivation to enter the sector out of our sense of responsibility, and we will work to support more ideas in the near future,” said Mohammed Sherif, board member and Chief Financial Officer at Barclays Bank Egypt.

Nahdet El Mahrousa based its initiative on studies of the Egyptian entrepreneurial market, showing that for every startup that launches, at least five people are employed.

Out of the 262 initiatives that presented their ideas for the competition last December, eight won prizes totaling 300,000 EGP (about $42,000 USD), in addition to joining Nahdet El-Mahrousa’s two-year incubation program that nurtures ideas that support economic development.

The most striking aspect of the winners might be their ideological and geographical diversity. The winners are between 20 and 35 years old, and they come from Cairo, Aswan, Alexandria, and Qena. Their ideas are in the service, logistics, environment, and craftsmanship sectors:

The participation of this last project was perhaps what struck me the most at the winner’s announcement; Al Arabi himself is a former peddler who has become a successful entrepreneuer working to address unemployment and poverty, two key social issues facing Egypt.

When asked about the key word that could describe his presence among the winners in the competition, Al Arabi smiled and said, “Patience... Despite all the obstacles that I faced in obtaining permits from the government to activate my peddler vehicle, I did not give up.”

Ayman Ismail, a member of the Nahdet El-Mahrousa board, clarified the NGO’s selection criteria: “We based our selection on several factors, mainly on innovation in the social entrepreneurship sector. We focused on entrepreneurs who possess a personality capable of evolving, whose projects directly address the unemployment problem, and who have actually started implementing their initiatives.”