In an attempt to defend citizens’ right to a decent internet connection at a reasonable price, a public campaign called Report an Deceitful Company, organized by the Internet Revolution movement, launched on April 3rd in Egypt (#ثورة_الانترنت). The campaign invites users to file complaints at police stations against “deceitful companies” or fraudulent companies that sell internet at inflated prices.

The movement started as a revolution of a kind following the growing discontent against poor service, high subscription fees, and poor technical support from telecom companies and internet service providers. Internet Revolution’s main demands are:

Campaign organizers are aware that this might hurt telecom companies’ holdings since, if the campaign is successful, they stand to gain international notoriety. However, they feel this was their only option left after friendly attempts to resolve the matter failed, including meetings between organizers and the National Telecommunications Regulatory Authority (NTRA).

In a talk with Islam Khaled, founder of the Internet Revolution page, he said that in the first meeting with the NTRA, they talked about improving the infrastructure for four million phone lines over two years, but the solution wasn’t satisfactory since it wouldn’t include all of Egypt’s existing six million phones lines, and the prices which constitute the main problem would not be reduced.

According to a survey conducted by Tech Echo in which almost 20,000 internet users from all of Egypt’s governorates participated, 97% believed that internet prices are too expensive, while only 2% said that they are fair. Ninety-six percent of respondents said that the internet quality is bad.

A YouTube video comparing internet speed with other countries posted about a month ago has also created buzz around the issue, as it shows that Egyptian telecoms companies are selling internet above market value with nonexistent or inept attendant services.

During the past few months, both offline and online actions have emerged to address this, including the Facebook page of the Internet Revolution Egypt, which was launched on December 7th and now has around 483,000 fans. Other protest actions have included people paying their monthly internet bills with coins to waste employees’ time in counting the money.

The Internet Revolution organizers designed a survey called the Internet Rebellion. Ninety thousand people filled it out, enough to get the attention of satirical television personality Bassem Youssef, who mentioned the survey on his program Al Bernamej. This was a major coup for the organizers as well as the youth behind the movement. 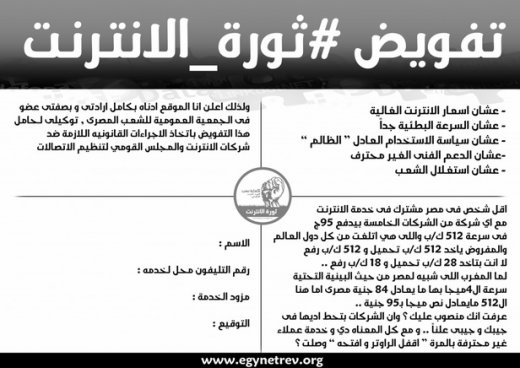 In a damning indictment of the NTRA, engineer Talaat Omar, Vice President of the Scientific Society of Telecom Engineers, accused the NTRA of collusion with internet companies against users, pointing out that the high prices of internet do not need proving and that just by going to Google, users can find the internet prices for any country, with Egypt being the most expensive in the world.

Omar has demanded internet companies reveal the costs they pay for the services, so as to give us a glimpse of their profit margin. He insists that the internet problem lies in the fact that more and more people are subscribing, without the companies making any improvement to the networks and infrastructure. As for the solution to the problem, he believes Telecom Egypt needs to use fiber optics cables instead of copper to improve quality and reduce cost; another solution would be for mobile phone companies shift to low cost technology, and reducing prices gradually.

This is not the first movement of its kind in the region or globally. By last October, an initiative called the Alliance for Affordable Internet (A4AI) was launched by the World Wide Web organization in Nigeria asking for lower internet prices in developing countries. The A4AI demands were that internet cost less that 5% of the minimum monthly wage in each country.

But Khaled says that the Egyptian Internet Revolution initiative is not part of the global A4AI movement, and that it was born in Egypt after the spread of the HardMode Gearhead video.

Is the service as bad as it appears to be, to the point where citizens find themselves obliged to report on telecom companies, and can citizens apply enough pressure to result in actionable decisions?