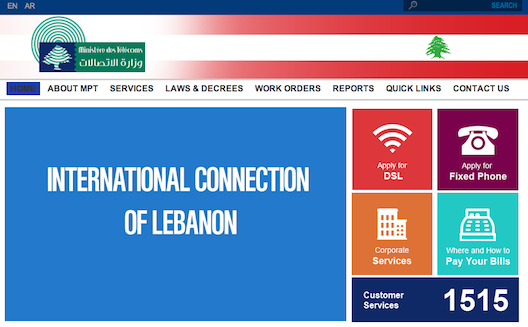 Last week, the Lebanese Ministry of Telecommunication announced a series of measures to lower internet and telephone prices. These will include significant reductions on DSL packages (an average of 80%), as well as important reductions on mobile calls and 3G services.

The Lebanese cabinet’s move to lower telecommunication and internet prices was a positive shock amidst a generally pessimistic atmosphere among internet users, entrepreneurs, and companies operating in Lebanon. This pessimism extends beyond the political sphere to the economy; many complain that young people’s job prospects are being impacted by the antiquated infrastructure of the internet and telecom sectors.

Responding to the news, some Lebanese entrepreneurs say they consider the price cuts to present a new opportunity to enhance their ecosystem and grow initiatives previously hindered by the high prices.

The founder of Dermandar, Elie Gregoire Khoury, said that thanks to these measures his company will save $1000 USD per month for the short term. He said he hoped that the price cuts will give more people access to the information world and therefore, in the long term, produce more innovation and more startups.

Abed Agha, the founder of Vinelab for e-entertainment, also expressed relief. He said: “Regardless of whether the intention from this reduction was to score political points, the price reduction has long been welcome as telecom costs continue to be a burden on Lebanon based companies.” Reflecting Khoury’s points, he says he thinks data cost reduction will help more individuals and homes get connected, ultimately benefiting both the individual and startups looking to use the digital world to disrupt traditional business.

Hind Hobeika, founder of Instabeat, thinks “this is huge, especially that Lebanon is such a small country far away from where all the magic happens and our only door is the internet.” She also pointed out that a lot of co-working spaces are expensive because of the huge internet bill, and “sometimes the internet can't even handle the load of what startups need (Skype, YouTube, etc.). [Sometimes] the internet stays slow the entire day.”

She stressed: “We need [these price cuts]. We cannot evolve without this!”

At a weekend press conference, Minister of Telecommunication-elect Boutros Harb detailed the cost-cutting measures, which will benefit mobile phone subscribers as well as internet users.

As the minister takes office, he says he plans on rolling out additional offers as well.