The Palestinian technology sector has been witnessing remarkable progress lately, reflected in individual attempts to take it to the next level.

Theoretically, PlayFresco can be used to answer the phone, put the call on loudspeaker, or use a variety of real world objects such as a pen, for example, to control apps or games on a phone or computer.

Firas Abed-Alhaq, head of the PlayFresco team, and his two partners Monier Aghbar and Sudqey Dwikat, the oldest of whom is 23 years old, began to work on the device in March of last year. The first design was a trial one where the team used simple materials; the size of this first prototype was large compared with the final one.

The idea for PlayFresco emerged when Abed-Alhaq saw his young cousin playing with a roll of duct tape, pretending to drive a car. Building on experience from previous projects, Feras then decided to try to add sensors to turn this idea into reality. The inventors said that the device did not cost a lot of money in the beginning, and the only thing they invested in was the time and effort of the producers. 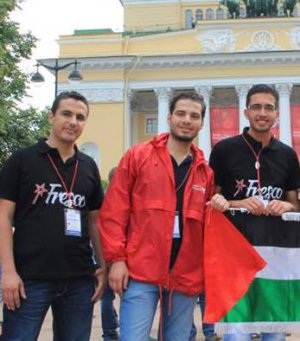 The team launched PlayFresco during their participation in the Microsoft Imagine Cup competition in Palestine. The first round took place at Najah University, the second at Birzeit University in April last year, and the final round took place in Russia last June. During the competition, investor Michal Zalesak from the Czech Republic heard about the team and was drawn by the idea, so last September he invested a sum that would allow the team to develop their idea for three months. The investor provided them with support in terms of electronics, and parts, as well as in consulting electronic companies, etc. He has been the investors’ only source of funding so far.

The team then went to Europe and represented Palestine in the e-nnovation competition in Poland. They came in second place, which motivated them to further develop and complete the project. They have also represented Palestine at the Pioneers Festival competition in Austria. They’ve been invited to attend events in the U.S. twice – once to CES Las Vegas, and once to the TechCrunch Hardware Battlefield competition – but had to drop out of both when they were denied visas.

This will prove a challenge in the future, as the inventors are striving to enter the U.S. market. “The number of citizens who use video games and smart phone apps in the U.S. is high, in addition to its being a fertile ground for technological developments,” said Abed-Alhaq. He added that the team will focus on mastering the device in terms of design and software before taking the necessary steps to tackle to the U.S. market.

Other difficulties have included initially finding the right parts to build the device, but after their time spent in the Czech Republic, they were able to get advanced parts and improve the device shape. They have also faced difficulty in communicating with mentors and technology giants such as Google and Microsoft to help them in their work. “It was easy to communicate with Google and Microsoft in Europe to accelerate the work and get solutions for software development, but it is much more difficult to get their attention from our base in Palestine,” says Abed-Alhaq.