As I write this, I’m listening to a playlist on Spotify, sitting across from my empty bookshelf, its sparse shelves occupied by a few CDs I don’t listen to anymore, and decades-old DVDs whose use now is to serve as conversation starters with visiting friends. The pleasure of browsing the shelves for the right album or playlist is long gone.

Qleek aims at reconciling the interactivity and power of digital music, with the emotional attachment we have to records on vinyl. Qleek is seeking to jumpstart a trend of products to re-materialize the internet.

Qleek consists of small customizable wooden hexagons called Tapps, which get inserted into a player. Each hexagon corresponds to a Spotify playlist, a Dropbox file, a YouTube channel, a Netflix program, or even a photo album, to name just a few of the options. When the Tapp is place on its base, it instantly plays its content, on the screen or speakers of your choice, thanks to a NFC chip. The design is sleek; the Tapps and its player are both made of wood, clearly the chicest trend this year in tech, as proved by startup media darling du jour Orée.

On the Qleek website, buyers can customize Tapps with wood-printed covers, or engraved titles (as shown in the picture), as well as which hardware the media should correspond to, by visiting the Qleek website. Users can also select rewritable Tapps that they can edit at any time on the website. 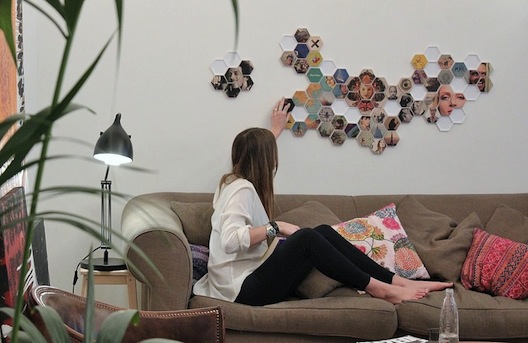 Qleek is not about buying content, but giving a unique, personal form to your digital library.

A French-Algerian project with international resonance

Qleek is the first project of Ozenge Studios, a design agency created by Ismail Salhi, an Algerian Ph.D. in Computer Science who moved to France to pursue his studies, and Johanna Hartzheim, a designer from France’s famous Les Ateliers design school. Industrial maker Pierre-Rudolf Gerlach later joined the team.

Qleek went through an incubation period (with funding) with Paceim, an incubator for North Africans and Lebanese with a French university diploma. The €30,000 investment and the long-term mentoring has been exactly what they needed, says Johanna Hartzheim: “Paceim… enabled us to launch, build our first prototypes, and validate the idea.” After Paceim, France’s best known accelerator, Le Camping, admitted the startup to its fifth batch in November 2013.

Since last week, the first Qleeks have been available to pre-order on a slick IndieGogo campaign. The kit with one player and five Tapps costs $249 USD. It’s not cheap, but the product’s novelty and the quality of the design and the materials justifies the cost, says Hartzheim. Those Qleeks should be delivered by this December.

This IndieGogo campaign is well worth a visit for anyone looking for inspiration for their own crowdfunding effort, for both its great design and its explanatory videos, which made the product much easier to understand.

The campaign was quickly picked up by international tech press, earning mentions on sites like TechCrunch and Fast Company. Hartzheim chalks up Qleek’s media success to four factors:

American tech journalists generally concur: it’s an awesome idea, with great execution and a flawless design, but it’s not enough. As Fast Company said bluntly: “Qleek's probably not going to catch on. The idea […] is perfectly compelling. But convincing people to spend extra money on a system that they don't need in order to listen to their existing library of digital content is a hard sell.”

This is probably what’s going to happen. Yet, if Qleek does succeed, this won’t be the first time the press is wrong about a product’s success.

And if its so-far successful crowdfunding campaign goes to show (Qleek has raised $37,000 USD in nine days and should soon reach its $70,000 USD goal) the startup could be well on its way to proving the media wrong.