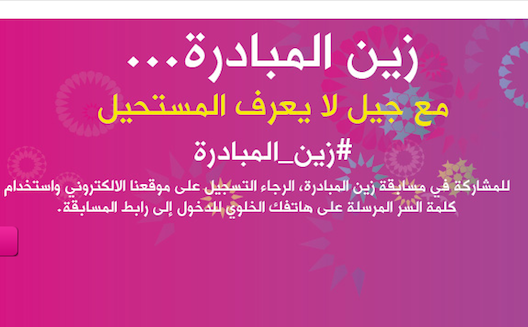 Telecom company, Zain Jordan, has taken a big step into actioning its Corporate Entrepreneurship Responsibility program and helping empower regional startups.. The company had signed a partnership with Wamda last year to establish a CER division designed to support young entrepreneurs in Jordan and help them develop their ideas transforming them into viable startups.

In this context, Ahmad Al Hanandeh, CEO of Zain Jordan announced a number of projects and activities the company will be working on this year with the aim of empowering local startups.

The most important initiative is a competition called Zain AlMubadara which attracted 150 projects, and chose 8 finalists. Workshops and pitching sessions were organized by Zain during the last months in order to support the finalists.

Zain also designed a number of activities and grouped them in an "Entrepreneurship Week" that took place between June 5th and 14th, with the participation of more than 130 entrepreneurs. The week was comprised of workshops and other activities to help entrepreneurs improve and re-think their ideas with the objective of fine-tuning them to attract investors' attention.

Al Hanandeh, who spoke during the closing ceremony of the entrepreneurship week, also announced "Zain Innovation Campus” (ZINC), a specialized center for all the initiatives and programs of CER that meets the needs of Jordanian entrepreneurs and consists of technology facilities and services as well as consulting and guidance. Zain signed also a partnership with US incubator Startups500 to help entrepreneurs convert their innovation into productive projects.

During this week Zain sponsored the second round of "the Arab mobile application challenge'', a regional competition where the participants will work on developing mobile phones applications. Zain considers this competition an opportunity for young people to familiarize themselves with the concepts of startups and as a way to support them in promoting and nurturing their skills.

The campus will launch later this year in King Hussein Business Park in Amman and will be built on a 630 square meter area.

Al hanandeh announced also the launch of "the smart government initiative in partnership with the Ministry of Information and Communications Technology and in cooperation with Microsoft. This initiative entails a specialized competition of developing programs for the governmental services through mobile phones, with more details to be revealed soon.