Just over a year ago, then-Features Editor Glen Dalakian got pretty excited about a new game, DefenDoor, and a new gaming studio, Digital Mania. He wasn’t the only one. The hype was understandable: the Digital Mania team is self-taught, working in a sector where Arabs and Africans are globally underrepresented, and they created a sweet game with a ridiculously small budget. But despite that, the game never took off.

Still, Digital Mania remains a tech reference in Tunisia. Why? Despite the disappointing performance of this title, the agency has rebounded and is about to generate its first profits. I went to meet the team in the house where they work. 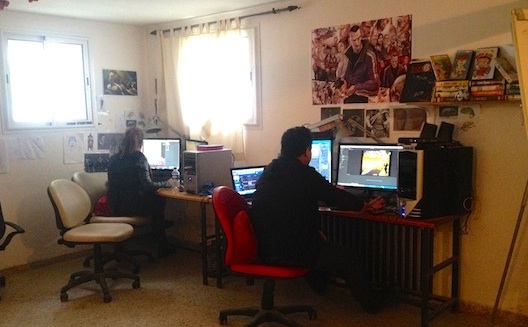 Walid admits it without an once of shame. DefenDoor, the project the entire studio worked on for 10 months, their most important project to date, failed because they didn’t save money for marketing and distribution, and because they made some mistakes in terms of design. Over the course of the first few days, the game attracted up to 5,000 players at once, who held parties of over 1,000 players. But once gamers gave it a try and formulated an opinion, they left.

This would have discouraged another company, but not Digital Mania. They built their startup around the idea of learning from their mistakes, and not giving up.

When Digital Mania launched back in 2009, nobody on the team (or in Tunisia for that matter) knew how to build a game, so they had to learn everything from the ground up. To realize its idea, the team had to create an environment where people would feel comfortable learning from failure.

The team settled their office in a house, where they’ve been able to work a lot, and have a lot of fun, recreating the flexible working style that seems so normal in the U.S. and so strange in Tunisia. Digital Mania doesn’t do hierarchy; everybody can give their opinions on any topic. “We don’t have job descriptions,” explains Digital Mania’s Founder Walid Sultan Midani, “except me because having a CEO is a legal obligation, and our CTO because we need one for conferences.” This model has helped the team stay motivated after the failure of DefenDoor. 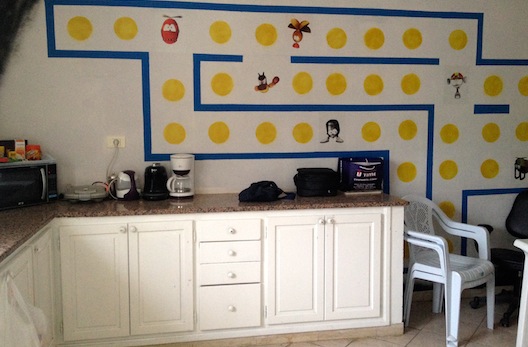 Truth be told, it was far from a complete failure: the game created a lot of buzz among game studios and journalists, and the team managed to prove them their know-how.

As a result of this buzz, several parties have reached out to the Digital Mania team for subcontracting. This wasn’t part of the initial plan, but following the failure, the team realized it could be a good idea to help them “stay afloat, and benefit from a technological transfer.”

Thanks to this change of strategy, the team has been able to adapt the famous cartoon Tunis 2050, a program broadcast during Ramadan in Tunisia, to a mobile and Kinect Xbox game released this month. The game, powered by Orange and supported by ads during Ramadan, managed to attract 50,000 players in 10 days, which should have led Digital Mania to reach its goal of 200,000 players, if it hadn’t been for a political incident that monopolized Tunisians’ attention and put all entertainment on hold.

But the feat got the attention of Jordan’s Kharabeesh, who contacted Digital Mania to localize the game in Jordan. In two months, the game reached 20,000 players. As soon as the advertisement campaign was over, the number of gamers plunged, but another shot of outreach from Kharabeesh, gave the game a boost, proving once again the importance of outreach in the gaming industry.

The team, which broke even last year, is now working on three segments: outsourcing, franchise, and creation of its own games, with a lot of upcoming projects in each segment.

This failure led the team to be more realistic, explains Sultan Midani. “If you’d asked me five years ago, I would have told you ‘we’re going to be the king of the world, we’re going to take the gaming industry by storm’. Now, I’ve learned to temper, to be more pragmatic.”

Now, two new companies have joined the house: Marketing Attitude, which does all online marketing (video, social networks, viralization, ad buying), and Kart, which does interactive and cinematic; a fourth one specialized in robotics should join the team soon.

The companies remain independent, but work closely with one another. “This enables each company to keep its energy and management at a human level, which is the only way to have everyone works at his best, and [feel] responsible,” explains Sultan Midani.

The three companies are all motivated by the same dream: to move the Tunisian culture on the digital scene and showcase it on the international market. “Tomb Raider, Indiana Jones, Prince of Persia, they all came from [our history]. If we were the ones telling those stories, this could lead to a different vision of the region,” believes Sultan Midani. “We all know Japanese culture thanks to manga and gaming; the same could happen with the Arab world.”