Three years is probably enough for an accelerator to get to know the ins and the outs of a regional ecosystem, and conclude which services entrepreneurs need most often.

This was the case with Flat6Labs when they announced a few days ago their plan to help bridge the funding gap for entrepreneurs and investors. Their ‘Flat6Labs Technology’ funding program is due to launch in 2015.

“Funding from Flat6Labs’ investment company will not be limited to a certain field,” said Ramez Mohamed, CEO of Flat6Labs Egypt. “On the contrary, we will make sure to support a diverse range of companies in terms of ideas, innovations, and services, with a special focus on digital content, and digital media, as well as on technological innovations.”

Over the course of five years the program aims at investing more than 50 million EGP (approx. $7 million USD) in 100 startups throughout Egypt. 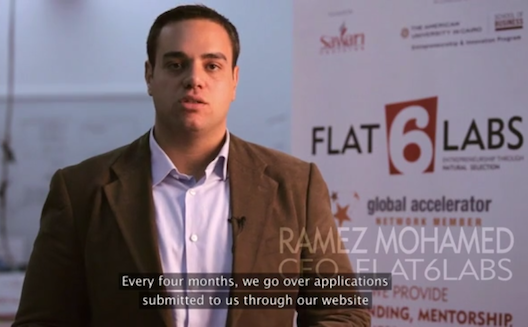 Such funds stem from the belief of organizer’s at Flat6Labs that investment is exactly what any entrepreneur at the acceleration post-graduation stage needs. “After obtaining a working space and networking with mentors from the entrepreneurial sector through mentoring sessions and big events, entrepreneurs often graduate with their companies having reached a maturity level that requires quick financial intervention to ensure its sustainability,” says Mohamed. “Even though the company grants the startups joining its incubation program EGP 100,000 EGP (approx. $15,000 USD) once they enroll, we have found that ongoing financial support is crucial for startups.”

This isn’t the first attempt Flat6Labs has made to provide the necessary investment for the survival of its graduating companies. Fifty percent of graduating companies had already obtained funding thanks to the wide network of investors that the accelerator makes available to its entrepreneurs.

Their statistics show that more than 40 investors from around the world have contributed to raising the equivalent of more than 15 million EGP to fund 50% of Flat6Labs’s graduating startups in Egypt alone.

Perhaps this integrated support is the key to the company’s success stories which have included Khobz, Integreight, Go Ejaza, and Nafham. Mohammed also pointed to Simplex, a startup specialized in developing industrial solutions for cutting and shaping wood, plastic, and steel using computers. He described it as one of the main successes that Flat6Labs offered to the entrepreneurial market so far, indicating that the startup has managed in around a year to make a 3 million EGP revenue (approx. $400,000 USD).

As for Flat6Labs, it is worth noting that is has organized 9 acceleration sessions in the past 3 years, 7 of which were held in Egypt and 2 in Saudi Arabia. The accelerator has graduated 57 startups and more than 160 entrepreneurs in both countries.

Moreover, the companies that were launched into the market thanks to Flat6Labs’ acceleration program have contributed to creating more than 400 job opportunities in both countries.

According to the company’s statements to the media, Flat6Labs’ is getting to ready to open an office in Abu Dhabi with support from TwoFour54 which develops Arabic media content. The accelerator also plans to continue its regional expansion in North Africa, the Levant, and Turkey. However, Mohammed refuses to disclose the company’s next stop after Abu Dhabi.