AtlanticLIVE, the events arm of Atlantic Media, was convinced in Abu Dhabi being the host of their first international summit What's Next Navigating Global Challenges with Innovation Generation held in the Emirati capital last week. “We feel that Abu Dhabi is day after day becoming a destination for most economies and industries, both local and international,” Logan Elsass,  the Associate Director, Custom Programs at AtlanticLIVE, told Wamda. “It is a great spot to found a company or launch a business.” 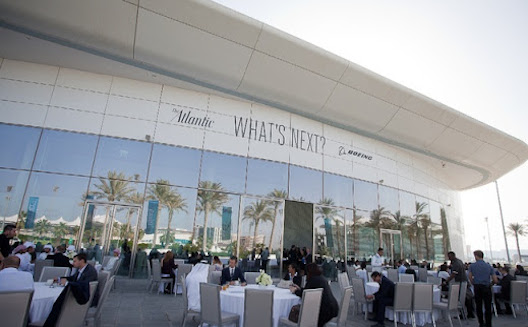 After already hosting over 200 events throughout the US, talking about innovation throughout healthcare, technology, education, and other fields, this first foray into foreign lands proved to be a success. For this summit Elsass saw the aim as shedding light on the most significant game changers in transcontinental innovation, and to emphasize the “innovation generation” concept.

Hosting speakers from over 25 countries, from the fields of education, media, technology, commerce, as well as experienced corporations and startups. Elsass was keen to point out that “there is no specific generation that innovates, but rather a mentality that surpasses age and educational background.” She added: “Many think that innovation is reserved for young people and students. In fact we find people like Fadi Ghandour, founder of Aramex, are just as innovative.” Everyone agreed on the importance of seeking change, steering away from old models, and stepping into the unknown - all rules when entering the innovation game.

And what are the game changers? Elsass believes that they vary from one field to another; with probably the most important of them “being ten steps ahead of everyone else in order to be unique.”

Some of the biggest game changers discussed at AtlanticLIVE

Talent, the key to success: Boeing’s board chairman, Jim McNerney, spoke in his speech about the approach that his company adopts in order to generate ideas, about the difficulty of developing the good ideas without being afraid of getting rid of the bad ones. He stressed the importance of adopting a culture that promotes “ideas from the bottom of the organization” especially as the goal is “to enhance the flow of ideas and not the lack thereof”. However, he admitted that the more the company grows, the more it is bureaucratic, making it more difficult for employees to get their ideas through. On the other hand, he emphasized that “innovation is the key to maintain good talents and the company’s position in the market.”

Philippe Forestier, executive vice president of Global Affairs and Communities at Dassault Systemes, said that hiring brilliant talents to solve problems, build better cities, and provide better healthcare and education, was the key. However, companies suffer from a shortage of talent because education is not keeping up with the employment trend.

Meanwhile, Azza Abouzied, co-director of NYU Abu Dhabi’s Design Technology Lab, pointed out that the only way to build successful companies and to make room for innovation is to choose strong talents with background (whether in education or experience). 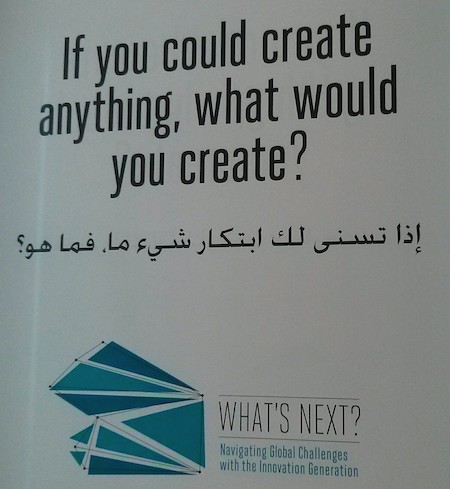 The revolution of online and conventional education: In order to keep up with the growing demand of talent, and to address the lack thereof in markets, most speakers agreed on the need for a revolution in the educational sector. A number of speakers talked about the importance of students putting their skills and talents at the top of their priorities lis.

Fred Moavenzadeh, president of Masdar Institute of Science and Technology in Abu Dhabi, stressed that the building of higher education institutions in the region, and adopting the standards of excellence seen in prestigious institutions in the US. He said that achieving this relies on changing educational models, and considered that the internet should be looked to as a tool that is changing the way students will learn: “the capabilities of the internet in the education sector go beyond just making courses available online.”

Brad Hargreaves, founder of General Assembly, which offers courses both online and offline, from web development to business basics, agreed, emphasizing the importance of offering alternative education that contributes to the “democratization of technology”. He said that Massive Open Online Courses (MOOC) did not succeed in changing the existing educational systems because they faced problems in maintaining students’ interest and commitment. He stressed that one of the pillars for the success for e-learning is putting employment at the heart of educational strategies - the goal is to have graduate students who are ready to enter the realm of work and ready to focus on “hands-on learning”.

Mobile is the future: Terry Kane, Head of Facebook Travel & Auto Strategies in the MENA Region, talked about how the world has become more open and connected, and about how the aim of his department is two fold: to target users more accurately on, and to allow businesses to better target their fans. “Brands have become embedded in our DNA,” he said. He believed that while Facebook is following strict policies with regard to advertising, it intends to make it more efficient by focusing on mobile services. He also emphasized that mobile is “the near future” and pointed out that by 2030, consumed digital content will outweigh television content in the United States.

Cyber security in an extremely connected world: There is no doubt that cyber security has become a major priority, especially when recent hacks have gone beyond just stealing information, and upgraded to the destruction of the systems where this information is stored. Mahir Nayfeh, senior VP of Booz Allen Hamilton, said that in reference to how the game and the identity of the “internet villains” have changed, “the maturity of online hacks shows that the tools have changed and developed, and that anyone is now capable of committing them.” Consequently, companies should adopt a methodological approach to protect its systems. As Macedonia’s Deputy Minister of Information Society and Administration, Marta Arsovska-Tomovska said, every company should have its own cyber security strategy. The idea was also supported by Nayfeh who added that companies should determine what important information should be protected, and assess the risks that they would face should that information be published. 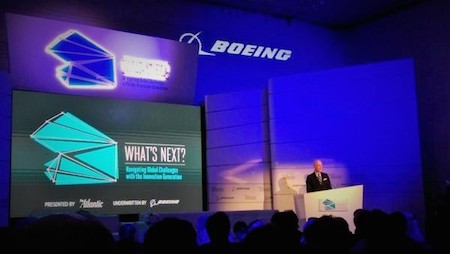 Nayef also added that several biometrics methods have been adopted such as fingerprints in national identities. Using the example of the “Be responsible online” campaign which is being held throughout Macedonia’s primary and secondary schools, Tomovska said that protection needs to start with a simple awareness.

Acting as a platform for identifying change makers and the promotion of innovation, the summit also held workshops for selected students attending from seven universities in the region - makers of the future mixing with today’s prominent figures.