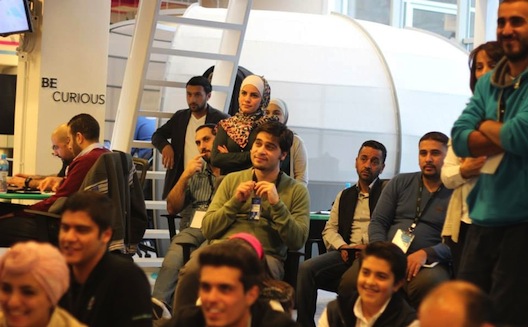 After having gathered entrepreneurs to help them formulate their ideas along three days, Startup Weekend Amman (SWA) has concluded its fifth and final event for the year. SWA was the first event to be held at Zain’s creative platform, ZINC, located in the Grow building, which was inaugurated last week as an initiative from the King Hussein Business Park to provide a co-working space.

This year was the first time that Amman participated in the Global Startup Battle in which 400 cities competed, 10 of which were Arab, including Sanaa, Casablanca, Algiers, and Erbil. Three teams from SWA were nominated to participate in the Battle:

1) Eventalize which pitched an app that can help plan an event by introducing participants and organizers to each other.

2) The Good Kid which has developed an app that helps parents and kids bond.

Among the most important services that SWA offered young entrepreneurs was mentorship by almost 15 specialists. We approached some of them to ask them about the importance of mentorship in entrepreneurship.

Question: How important is a mentor?

“Mentorship is very important. I am aware of the fact not only as a mentor, but also as an entrepreneur. Mentorship is a new phenomenon in our society and I can understand how young entrepreneurs might not see it important. They usually seek all the freedom they can get, especially after they become free from their parents’ control. However, they should appreciate such an opportunity and take the advice of a mentor, even if the latter is tough sometimes.”

“Having a mentor is a vital thing. Building a company is like running a marathon. You need a mentor to show you the track, not to run for you, and to teach you indications and signs which come from experience. An entrepreneur only needs someone to help him make decisions by sharing with him data that he wouldn’t otherwise have.”

Question: What should be taken into consideration when choosing a mentor?

“Before becoming an entrepreneur, I myself looked for mentors. Choosing one was one of my biggest challenges. What I discovered was that a friendly relationship between an entrepreneur and a mentor is one of the most important foundations for mentorship. There should be understanding and interaction between the two and it is recommended for the entrepreneur to expand his horizons by consulting more than one mentor, because each one can offer help in a different aspect.”

Moreover, it is not important for the mentor to be experienced or to have a high rank. Any person, even a regular employee, can help in a specific topic such as a given technology or the like. Moreover, entrepreneurs should connect with their mentors clearly and on a continual basis and consequently the two should agree on when and how to be in contact.

“Trust and honesty. You don’t want a mentor to tell you that you’ll make it in anything. What you want is a mentor who gives you tough love when needed and who is capable of criticizing your work.”

Question: Jordan is obviously becoming a good ecosystem for startups. What are the factors or services offered by Jordan that allowed it to attract this category of business?

“Unemployment in Jordan is the main driver for entrepreneurship. The unavailability of job opportunities has encouraged young people to establish their own companies. It was the only solution for Jordan to get over this problem. However, despite the many advantages of entrepreneurship in Jordan, it can be dangerous at times if its only aim is employment instead of solving a problem or providing a service, making entrepreneurship just another form of disguised unemployment.”

Question: What are the biggest challenges that startups face in Jordan?

“The lack of involvement of the government in entrepreneurship. Entrepreneurship in Jordan relies on the private sector which is cannot facilitate government paper work and formalities such as customs, opening bank accounts, registering companies, and shutting them down.”