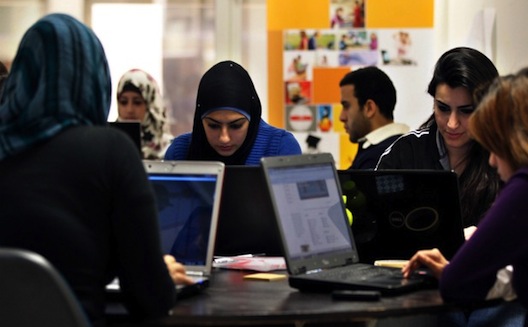 Youth entrepreneurship is of particular importance in MENA. Officially, one in four young people (aged 18-29) in the region's labor market do not have jobs and one in ten adults find themselves in the same position. Unofficially, these numbers could be much higher, especially when considering the large prevalence of informal unemployment and underemployment in the region. With such diminished job prospects, an emphasis on youth entrepreneurship in MENA makes good sense. If young people cannot find jobs, they can create their own and ideally generate jobs for others.

A growing pool of initiatives is pushing forward the youth entrepreneurship agenda in the region. Non-profit INJAZ is a leader in this field with over ten offices across the region and multiple programs that guide youth through the business creation process. Additionally, large institutions such as the International Labor Organization and theArab League have created trainings, research and other programs to support this cause. Universities in the region have also entered this space, with several creating on-campus incubators and others teaching entrepreneurship courses to students. Even corporations such as Shell have programs across multiple programs supporting youth entrepreneurs.

The approaches and outcomes of such programs vary, yet they share a common philosophy: give young people the resources to create their own companies so that they can take agency over their own economic futures. In the MENA region it is a critical learning experience for young people.

However, ultimately, the region will need many more people to work for a startup than to create their own. If the MENA startup community is to have a significant impact on the region's job creation efforts, entrepreneurs will need to both start and grow their companies. A large body of research points to the central role growing companies have on job creation efforts globally. Put differently, startups are important, but those that grow have the most impact. The growth process hinges on great founders, but also great teams. To scale their companies entrepreneurs must be able to find skilled individuals who are eager to work for a startup. As such, in parallel to learning how to start a business, new entrants to the MENA labor market will need to be exposed to the virtues of working for a young company.

This effort is essential in MENA's larger efforts to create jobs, yet one faced by numerous stumbling blocks. Our research at the Wamda Research Lab (WRL) suggests that not only do many startups in the region struggle to find talent, but they also face difficulty in enticing employees to work and remain with their companies in general. In a WRL survey of over 900 entrepreneurs and entrepreneurship experts in MENA, countries such as Jordan, Egypt, the UAE and Lebanon, where startup communities have grown substantially in recent years, over 60 percent of entrepreneurs pointed to the challenges of finding talent as an obstacle they faced when trying to grow their companies. This figure rose to over 70 percent when looking specifically at fast-growing startups.

Retaining talent was also a commonly reported challenge. Roughly one in three experts surveyed in our study observed this difficulty in startups that they worked with while nearly one in three fast-growing companies indicated that they experienced difficulties in keeping staff.

When speaking directly with surveyed founders, they explained the difficulties of not being able to find and retain employees as the result of educational challenges,minimal awareness of the value of working for a startup and a lack of incentive for joining a young company. Often, entrepreneurs discussed how employment at a startup is seen as a temporary job in MENA. Lacking the brand and financial stability that corporate and government employment can offer, job seekers opt to work for a startup when they have no where else to work.

Not being able to find and retain employees can have huge implications on company growth and subsequently job creation in the region. Without good employees founders will not be able to grow their companies and the full value of entrepreneurship in MENA will go unrealized.

Just as more and more MENA youth are being instructed that starting a new company is a rewarding professional pursuit, working for a new company needs to be positioned similarly. Many programs supporting youth entrepreneurship in MENA define entrepreneurship as a mindset: creativity, critical thinking, leadership, communication skills and interpersonal skills are at the core, accompanied by openness to risk, teamwork and flexibility. These competencies are needed to start and operate a business, but they are also crucial to being an employee that adds value to a company. As new programs in the region teach young people about the merits of starting a business, they also need to position working with a startup as a viable career choice. The two are symbiotic and the full potential of each track cannot be realized without the other. Moving forward, here are two recommendations to help shape efforts supporting entrepreneurship amongst youth:

1. Grow a culture of working for a startup in parallel to a culture of starting one: As more programs teach young people about starting a business, they must also learn that working for a young company can be a rewarding career. Entrepreneurs themselves can be ideal role models, though employees at startups can also be sources of inspiration and knowledge for young people.

2. Understand the skills that entrepreneurs need:To effectively position work at a startup as a viable career opportunity for young people, policymakers and educators must also ensure that they learn the skills that will allow them to work at startups. While many would argue it is impossible to teach someone how to become a successful entrepreneur, it is possible to teach people how to think, make decisions and respond to challenges in a more entrepreneurial way. Few people will found a company though these skills can be leveraged in any office or industry.

Teaching young people that working for a young company is a rewarding career opportunity is a critical undertaking in MENA. Doing so can only help in building a more dynamic and contributory workforce in the region.