Jordan is facing a potential crisis. While GDP growth has been steady for the past few years and is projected to remain that way, the economy has not been able to create jobs at the same rate (around 1 in 7 people remain unemployed). This, coupled with the fact that 35% of the country’s population is under the age of 15, means that the country’s leaders need to come up with a plan to employ Jordan’s youth towards the country’s future – and fast.

Their answer? The tech sector.

As the authors of recent Endeavor study “Multiplying Impact: Amman’s High-Growth ICT Industry” say, “Jordan’s tech sector has demonstrated that it is in an excellent position to do this, particularly in servicing the consumer markets and supply chains of resource-abundant GCC economies.” Indeed, the sector has grown from being worth $560 million in 2000, to a $2.2 billion industry today, largely supported by the strong telecom sector.

The report concedes that the government of Jordan has supported the tech sector, but the real support has come from “a small group of dedicated entrepreneurs,” including Fadi Ghandour of Aramex (and the Chairman of Wamda’s Board) and Karim Kawar of Kawar Group, both of whose contributions have been “invaluable” to the growth of the sector.

Taking the famous Fairchild case as an example, the 1957 company that launched dozens more and kickstarted Silicon Valley as we know it, the report emphasizes the need for Jordan’s new generations of tech entrepreneurs to extend their hands to earlier stage entrepreneurs. “When successful founders generate new spin-off companies, mentor others, and act as early-stage investors, they increase the opportunities available to successive generations of entrepreneurs.” 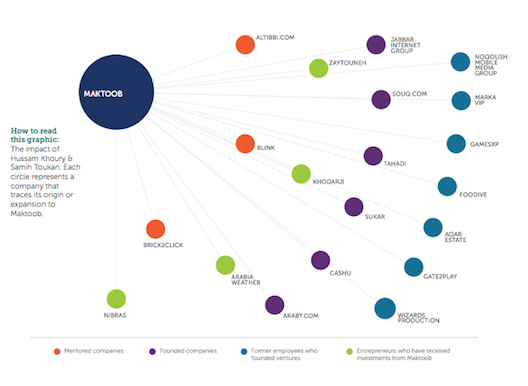 Finally, the report isolates the four steps comprising the process of building a high-impact tech ecosystem. These are:

1)   Ambition: when an entrepreneur seeks to build large, scalable businesses in their local communities, which includes a desire to remain living and working locally.

2)   Growth: when ambitious founders achieve significant growth at their companies, which requires access to talent, financing, and customers.

3)   Commitment: when successful, ambitious founders make the choice to stay in their communities rather than moving to a more developed country.

4)   Reinvestment: when founders of successful companies reinvest in other entrepreneurs and businesses.

Read the full report here, or download the linked file.