This article has been crossposted from Firnas.org. 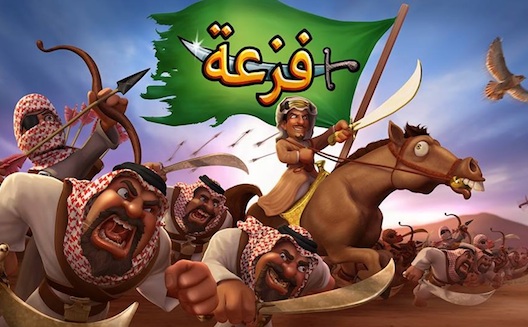 Smartphones are widely spread in Saudi Arabia, to the point that the mobile penetration rate has reached 170%, i.e. 170 phones for every 100 people or 1.7 phones for each person. With Saudi youth representing the largest proportion of the population they are thus contributing a lot to these figures. This in turn has enhanced and increased the number of gamers for whom gaming is considered a major entertainment activity, if not the most important one.

During our talk with Abdullah Hamed, a game producer and developer, he spoke about the increasing popularity of games in Saudi Arabia, the types of games that are the most popular, and how game developers can make money from their games.

What types of games are the popular in Saudi Arabia?

Faz3a [pictured above] is an iOS game that is currently leading the way in most Arab countries, not only in terms of downloads, but also income. We know that players around the world in general prefer carefully-produced games made by experienced people with high-quality graphics and design. People like to own luxury items in general, and games are no exception.

What software do gamers and game developers prefer here?

So far, we don’t have a unified software to develop games and that’s the beauty of this sector. Each developer uses the software that they think is more appropriate for their needs. Creativity isn’t restricted to one software.

What do you think of the abundance of Android drifting and wheeling games?

Regardless of the game's topic, it’s a good thing. Every gamer prefers a particular type of game. Drifting games have their audience but I don’t think that they measure up to the level of quality that gamers are looking for. Any higher-quality game has a chance at stealing their market share. However, this is only the beginning and I hope to see an improvement in the quality of these games with every release update. I also hope that these developers find a way to make more money out of these games in order to increase profits and stay sustainable.

So far, paid games haven’t proven to be successful in the market. The Arab marketplace is still very small overall compared to the English and Chinese markets and purchasing power is concentrated in the Gulf.

Even if every gamer buys a game for 5 Saudi Riyals [SR], for instance, this will never cover the production cost of a high-budget game. Moreover, ad-income doesn’t cover production cost either. That’s why games that offer in-app purchases are the most appropriate for the market. Paid apps may be suitable for very low-budget games, and I am trying to prove whether or not I am right about this, through Modern Electronics Company’s Game Nomads initiative.

In the end, games are the most creative method of expression. They contain texts, graphics, sound effects, music and interaction. Any game developer, whether they are experienced or not, has my utmost respect. Regardless of a game's profitability, developing games will remain the most popular art form for years to come, and I am proud to be a part of the gaming community, even if all my attempts at making profits are to no avail.