Following up on our recent piece on m-health in the region, we’ve compiled a list of other health applications and platforms that are worth keeping an eye on this year. 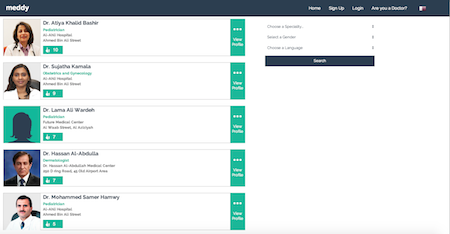 Despite Qatar having over 600 health clinics, fewer than 60 of them have an online presence, according the team at Meddy, making it difficult for people to match themselves up with the right dentist, gynecologist, or pediatrician. After several conversations with friends who complained about having to visit up to five specialists before finding one that they actually liked, Haris Aghadi and his cofounder Abdullah Alkhenji wagered that a search platform for doctors was the way to go for a class project at university.

Since launch in August 2014, they have now listed over 1,000 doctors from 130 private clinics in Qatar, with up to 3,000 page visits a day. At the moment they are just a website, but the founders tell Wamda that they’ll plan to launch a mobile app in the next few months.

“The hardest challenge has been collecting data” from the doctors, says Aghadi. “It has to be done manually as not much is online. [The doctors are] up for it but making that initial contact is difficult.”

As for monetizing the platform, there are no immediate plans but this year they hope to use sponsored ads and perhaps paid ‘premium profiles’ for doctors and clinics that want to highlight their pages.

With no direct competition it looks like the two could be on to a winning combination. 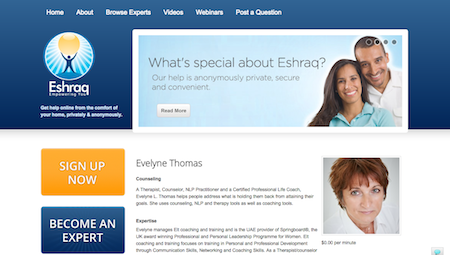 When Dubai-based Ragy Khairy first thought to create an m-health platform three years ago, his starting off point was mental health, a sector he found to be regionally under-served. He soon developed his idea to include ‘experts’ from all medical related fields that could be on hand to provide real-time feedback for inquiries.

This instant feedback is what Khairy believes to be Eshraq’s primary unique selling point (USP). Users have a variety of free and paid packages to choose from, including written information and live video sessions with experts. The information service and webinars are free, whereas private counseling sessions with a professional are paid. Khairy says this leads to their second USP: the fact that the sessions are charged by the minute. “A person may not need an hour to get the information they want,” he says. “Why pay for an hour when actually all you need is 10 minutes?”

Launched in December 2014, the platform has 15 experts on its books. These include doctors and counselors from around the world, including India, France, and the US. In recruiting experts, Khairy wants to create a point of contact for those seeking information about topics from obesity, domestic violence, substance abuse, and child behavior. Eventually, he sees the site as expanding beyond the medical field to include experts from the legal and financial sectors as well.

Still in his day job with the Dubai government, Khairy is currently seeking early stage investment, as well as a cofounder, and hopes to run a huge marketing effort in the coming year. 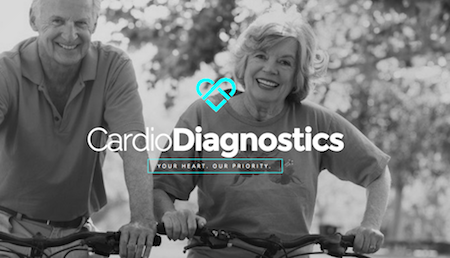 According to their website the global cardiac monitoring market is expected to grow to $23.3 billion by 2017. Founded in 2012 by Ziad Sankari, the startup came about, in part, as a result of Sankari losing his father to a heart attack when he was a teen. The loss led him to focus on engineering technology capable of monitoring patients hearts for long time periods of time.

Approved by the FDA, CardioDiagnostics’ portable monitors analyze heart signals (ECG) around the clock, screening for arrhythmias (irregular heart rhythm), and can be used by patients via doctor prescriptions. This means that if the device detects an irregularity, it sends the data to a secure, US-law (HIPAA) compliant cloud for further analysis by medical experts.

The startup was awarded funding from the Lebanon-based VC Berytech Fund I in 2012.

With research and development offices in Lebanon and the US, Sankari and his team’s plans for 2015 include developing additional technology, and targeting lifestyle optimization. They’ll be doing this by leveraging proprietary technology for analysis of cardiac data, and paying specific attention to markets interested in fitness and health, ranging from teens to the over 60s. Expansion into the GCC and Turkish markets is also in the works. 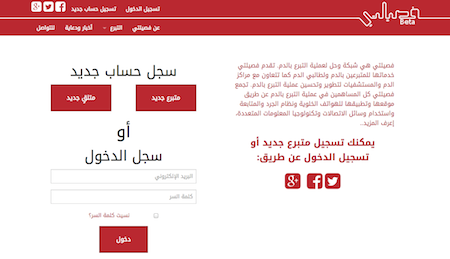 Now in its beta phase, this blood donation application was conceived more than three years ago by Samar Ali. The app aims to create easy connections between blood donors and hospitals and blood banks, based on a user’s location and blood type.

Under the umbrella of AtheerCare (started only two months ago), a company specialized in healthcare information and management system solutions, and healthcare research and development (R&D), the website was launched in October 2014. “Faselty actually came from Twitter,” says Ali. “I saw all these needs being tweeted, and [cross-referenced them with] the personal needs of my cousin who has leukemia.”

Ali is currently on the hunt for investors and is without cofounders, though she said she has had “contributors to Faselty as a project, from Bdaya IT at the German University in Cairo, and a GUC student, a UI/UX freelancer.

Ali told Wamda that she felt there to be little interest from investors in healthcare startups. “Until now we don't have registered hospitals or blood banks as the negotiation process with them takes too long as most of them are governmental entities.” However, she is optimistic; the goal for 2015 is to register at least 100,000 donors by the end of the year. 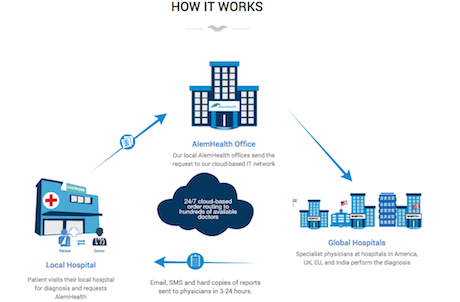 Prior to starting AlemHealth, Aschkan Abdul Malek was in investment banking in the US, then he spent five years managing projects and advising foreign multinationals, as well as aid and development organizations in Iraq and Afghanistan. So, creating a health platform that would aid those in developing countries seemed like the next logical step.

Based in the UAE, AlemHealth is a telemedicine service, linking up hospitals in developing countries with a network of specialists around the world. Looking to operate in countries that have the largest gaps in terms of doctors per capita, the service works so that if a patient goes to a hospital and finds that there isn’t a specialist there that can treat their particular case, the hospital will be able to find another, perhaps in another country, with whom they can communicate the case, and then receive a diagnosis. Malek says that for emergency cases diagnosis’ can be made within three hours.

With his cofounder Sajjad Kamal the two started to develop the healthcare platform in May 2014. “We’ve moved very quickly,” Malek told Wamda. “Already we’re seeing revenues.” For Malek, an NGO model for what they’re doing isn’t easily scalable. “Finding a few doctors can be easy, finding hundreds or thousands on a daily basis that can respond in 3 hours, which is what we offer, that’s something you need to pay for.”

They haven’t been without their challenges though. When a product deals with people’s health and lives, reliability is of utmost importance. For Malek the “minimal viable product” has to be more fully formed than in other industries, and that takes time and money; he also says that educating users about their health is a huge challenge. “Preventative healthcare and screening are really underutilized in these markets, so we typically see patients at far later stages than we’d like.”

With a combination of bootstrapping, some investment from advisors, friends and family, they are now in the middle of a funding round covering the region and elsewhere. At the start of February they were named one of the New York based accelerator Startup Health’s ‘Healthcare Transformers’.

What’s in store for 2015? “We’re looking to offer our services in even more developing countries, and continue integrating more services to patients and hospitals on our platform, including remote pathology and video consultations for patients, and decision support tools for the doctors.”

If you know of other applications or platforms within the m-health field that we haven't covered on Wamda, do get in touch.