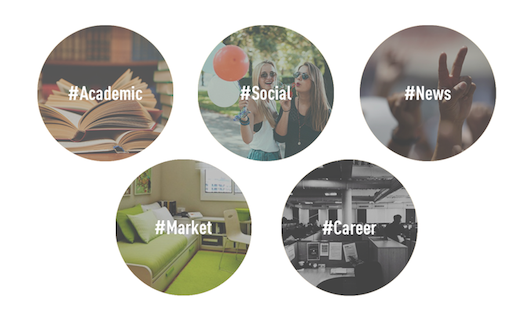 When you have a Facebook account you’d think there would be little else forcing you to join another social network. Well, apparently Facebook is not for everyone.

What does Campus Society do?

“We’re building something in between Facebook and LinkedIn,” says cofounder Oliver Muller. Starting with AUB in 2014 Muller and his cousin Rashid Ajami decided that they wanted to create something that students, as well as faculty, could use to link up, share campus related information, and potentially reach out to future employers.

Launching at AUB, viewing Lebanon as their beta market, they have, since September 2014 signed up 30,000 students across the country from a total of 15 universities.

With a current user rater of 1,000 sign ups a day, plus a weekly return user rate of 25%, their numbers are beginning to look impressive. For every campus that they are active on [they have an “ambassador” assigned to each campus] there are also interns that help with signing up users.

As well as the ability for students to connect across the region, CampusSociety is shortly going to be providing tools on the site so that students will be able to build their CVs and search for jobs, as well as enter details about their courses, timetables, and even endorse professors and teachers. 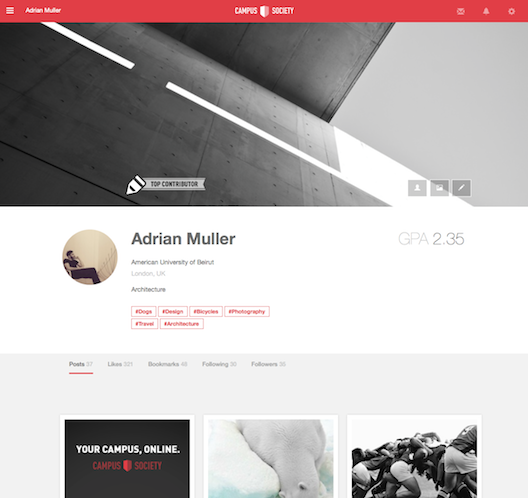 On the hunt for more funding

Aside from the not too dissimilar app myU.co in Kuwait, the AUB alumnus Muller says that he believes there is a dearth of digital platforms where education is concerned and as such, competition for them is lower.

As they “slowly” make a push for UAE and Oman they are on the hunt for a Series A round of funding. So far, from private investors, they have tallied up £700,000 (just over $1 million USD). Now, Muller says they are “currently in talks with major Silicon Valley VCs and private investors. Interest is very high,” he told Wamda over email. “We plan to close fundraising by summer.”

But doesn’t Facebook provide this ability to connect? In 2013 a report from the Global Web Index found that Facebook is losing its luster with teenagers. Facebook. Even Facebook itself said that teenage engagement with the site was waning.

Although Muller does say that what they are aiming to create is something between a Facebook and LinkedIn he is adamant that their “edge is that tight-knit student community. You can meet students across all campuses in MENA.”

For one Lebanon based user, student Hazar, the fact that he wasn’t on Facebook meant that he was able to sign up to a social network that provided him with the connections he was otherwise lacking. For another student, Rim, “As a teenage student I am currently concerned about my future career,” she tells Wamda over email. “CS allows its users to build a profile by which they can directly apply to jobs and be easily noticed by employers.” 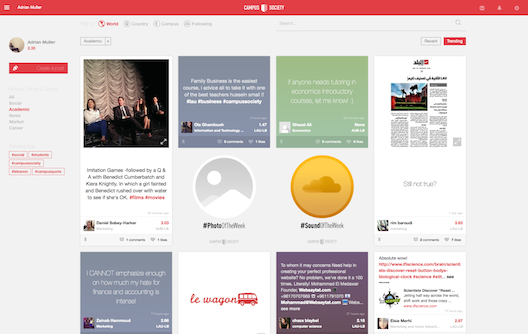 Something that also appears to be giving the startup an edge is the fact that the cofounders and their team of developers are not even based in Lebanon. Aside from a couple of staff, their interns and their ambassadors, Muller and Ajami are working out of London. “The benefits are mainly finding talent and funding,” says Muller.

While he admits that it would be good to have a foothold in MENA the 50 plus interns that they have on board as part of their ‘ambassador program’ means that there are multiple contacts on the ground. In the coming months they will be launching the Campus Society mobile app, new formats for the student profiles, course listings, CV builders, job algorithms, as well as employer dashboards for companies to find and communicate with students. 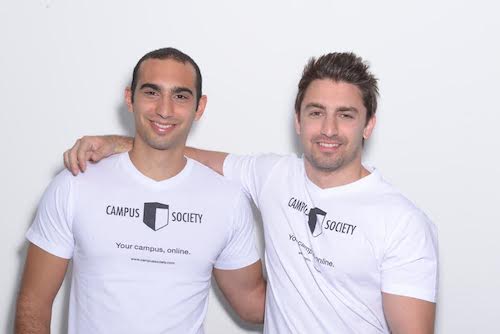 From left to right, Ajami and Muller. (Image via Campus Society)

“Marketing and raising awareness, getting the users to move away from the social networks they are already on has been hard,” admits the cofounder. “But at times we can barely keep up.” He says that tens of thousands of notifications a day and over a million content impressions per week are positive evidence though for the demand of such a platform.

Muller says that based on traction and the approach in Lebanon, plus a few new cities, he believes they need 18 months to grow their community to more than one million members.