Netflix is now worth about $27 billion; Film2go no longer exists.

This is where the story of Bahrain’s first angel investor network began.

At first Haider thought he just needed money; “I didn’t really think mentorship was a big deal,” he says. Having been turned down by several regional VCs, eventually he turned to Sami Jalal, a Bahraini businessman from a prominent family.

While he too wasn’t keen on investing in Haider’s startup, he offered him a different kind of helping hand: advice. “He said we were making enough money and there was no reason we needed more” from VCs, says Haider.

He offered to take a look at the expenses of the startup, and, as Haidar puts it, after just a few minutes was able to slash their spending by 80%. 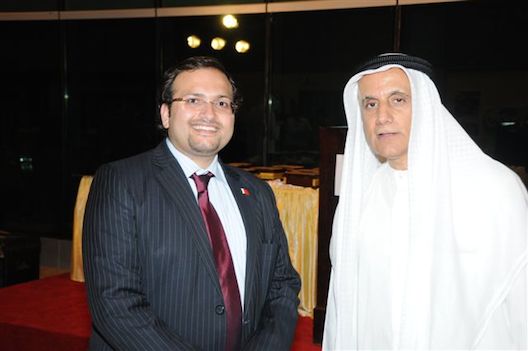 Haider and Jalal. (Images via Tenmou)

“Sami pointed out at one point that were I in the US getting investment wouldn’t be a problem,” Haider says. Indeed, back then it appears that getting investment in startups, as well as mentorship, was a largely foreign concept. Haidar himself, on three occasions said “big Bahraini families” said they were going to invest but when it came to inking the deal they would disappear.

By this time, 2009, Netflix was worth about $5 million and Film2go was just covering expenses. Haider’s dream of scaling the project wasn’t materializing. Realizing that startups shouldn’t make the mistakes that he had made with Film2go, Haider and Jalal began to develop a business model for Tenmou, their venture.

Heavily influenced by the activities of incubator TechStars, and the work of Paul Graham and his Y Combinator model of nurturing startups, Haider and Jalal, a man from a prominent business family with much experience. “They were hands on in their approach,” says Haider of the US-based incubators, “compared with a lot of angel investors, and that was what we needed in the region.”

Getting people on board this time around was a great improvement and was done within a short period of time. They gained support from the Bahrain Development Bank, who said they would front 20% of any investment they made, stating they wouldn’t interfere with the operations, and it would be run as a private sector concern. 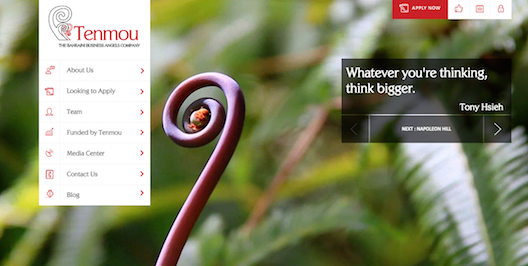 They once again returned to the plethora of families that make up Bahrain’s business ecosystem and approached 50 in total, asking for 50,000 dinars each. Haider says that in the end they had 14 commit to the investment and all were very keen to support the entrepreneurial ecosystem, rather than just making money. They raised an initial fund of about 1 million dinars.

Much has changed since 2011. They morphed their accelerator program into an initiative focused purely on mentorship. “We weren’t accelerating fast enough so we shifted focus onto the mentoring.” Haider also married, had a child and worked very hard to bring the words ‘angel investor’ into the common parlance of the entrepreneurship community. Wishing to play down his role in shaping Bahrain’s startup ecosystem, he say he’s “pretty happy that ‘oh angel investment is an option’ has entered the common lexicon.”

As many in the entrepreneurial world can attest failure is common but it is also still taboo in the Middle East. For Haider himself, he says his own have taught him much, enabling him to give real and practical advice to others, “It is difficult to deal with, but I speak quite openly about my failure and experiences.” It is also part of the investing process. “We always planned for about 50% of businesses failing,” says Haider. “As an angel investor you need to have a portfolio approach. You can’t just invest in one or two and hope they’ll do well.”

For Haider, spending a million dollars on one investment is not as good as making $100,000 bets on 10 different investments. “It’s about probability,” he says. “Even the best ideas or best entrepreneurs we believed would really succeed, once we invested, things didn’t really pan out as we’d expected them too, so no matter how much due diligence you do in ideas stages, they are just not always going to work, things change quickly, and sometimes, even the best ones fail.”

Of the 18 companies that Tenmou has invested in, about five have been complete failures and three “have been amazing successes though.”. But even if all haven’t been a success the model certainly has - the World Bank and Babson College have both used Tenmou as an example of how to develop angel investment groups in emerging markets.

Of those successes eatapp.co and utrack.tv have both managed to branch out on their own after going through Tenmou’s doors. The former was the first company from their portfolio to raise an outside round of finance; the latter is now in 500 Startups accelerator program in Silicon Valley, (the first startup from the GCC to enter the program). 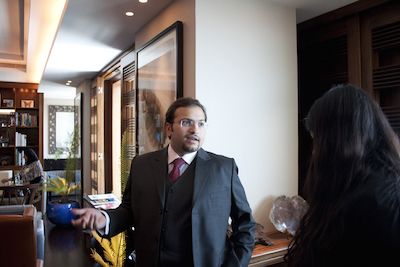 As Haider himself learnt there is more to starting up a business than just receiving funding. It really is about mentoring and nurturing. Haider says he often feels like a psychiatrist. “We have to support them, these startups are driven entirely by passion and morale and determination,” he says. “Once they lose that and they start to doubt themselves, that’s when things start to decline in the company performance, and we’ve seen that over and over again.”

Despite reaching self-sufficiency and stability, Film2go was finally shut down in 2011. It had reached an ‘active’ subscriber count of 50 [250+ back in 2009] . Was he sad to see it go? “Yes, it was my passion project, and I still believed in the opportunity for the MENA. I still do.”

Nowadays, Haider finds himself as a talent scout for investors overseas.

In addition to his role at Tenmou, Haider is now a Venture Partner at 500 Startups, a Silicone Valley incubator.As they only person in the region working with the incubator he tells Wamda that they are looking to invest in 10 to 20 companies a year. Since he joined in October 2014, they’ve reached five.

In it to win it

What of personally investing in the startups coming to Tenmou? Haider says that he lost all of his money on his Filmtogo venture. It was his first ,and has so far, been his last investment.

Of course, Haider is not disillusioned completely when it comes to making investments, despite, he says, losing all of his own money on his startup, he hopes to eventually invest in something that comes to Tenmou. “It’s about believing in startups,” he says when asked what he has learned and what he can share. “If you’re going to be an angel investor, or a VC, you need to take risks.”

The Bahraini born and bred, former investment banker (it was once a dream, now no more) claims exhaustion over the call. He’s jet lagged, and generally tired from the work he’s been doing for the ‘scene’ but he won’t go without adding some more words for those with an interest in investing:

“Write many small cheques, have a diversified portfolio, and make investments. If you don’t invest you won’t make a return.

Not bad advice from a man who hasn’t even reached 30 yet. He recently told his wife that he felt he hadn’t achieved much…. “Are you out of your mind?” was her apparent reply. Citing jet lag, Haider quietens down. Maybe he’ll rest up with a movie? Or five?