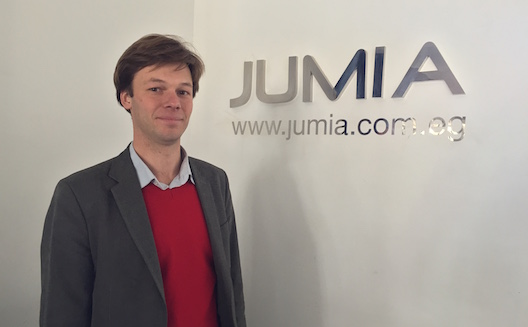 Egypt is a major market for Jumia, Rocket Internet’s market place in Africa and they’re betting big on it. In December, they hired not just one but two CEOs to take the reigns of their 300-person strong team.

As usual, they went for seasoned managers coming from more traditional sectors. They hired Hesham Safwat, an Egyptian retail expert, and Amaury Celier, a French engineer who started a company called Neodyss in Libya in 2010. This company was catering industrials and oil & gas customers to design and provide them with environmental projects.

We chatted with Celier about his experiences jumping from traditional entrepreneurship to Jumia, and about his vision for Jumia in Egypt.

Wamda: Why did you leave the company you created to join Jumia?

Amaury Celier: I was contacted by the leaders of Internet African Group at a time when I realized Neodyss’ growth was not as fast as I expected. I thought I would learn a lot, and the challenges were really excited and it was a great opportunity to develop something big.

Neodyss is still alive, but the journey is going on without me.

Wamda: Why was the growth slower than expected?

Amaury Celier: Neodyss is a great story of a small player disrupting a market in front of very big companies. It is very excited to be a small player in a market where nobody saw you coming but the very big corporate world is slow, and that’s what not in line with what I expected.

I’ll still encourage young entrepreneurs to go after big corporations, because the potential is big, and we managed to do it in some instances. But you need to be prepared for the long run. It’s a marathon. You need to secure the adequate resources to do it.

Wamda: Did the fact that you were in Libya play a role in the lack of growth?

Celier: Yes. Libya was our first market, and the civil war broke out during our first year in business.

Egypt is not at all like Libya. It is a very old civilization with a very strong sense of being a nation, I’m very confident that the country is stable and is recovering from what happened in the last few years.

Wamda: You said before that Egypt is an important market for Jumia. Why is that?

Celier: The traffic in Cairo is terrible, and everyone is spending a lot of time in their car. We offer the possibility to pay online from their office and home. We offer cash-on-delivery, it’s a way to show our customers that they can fully trust Jumia because we carry the risk until their doorstep.

Egypt is a very mature country with a long history of economic development. We’re lucky to be in an overly competitive market because it entails that our consumers have very strong insight on what they’re looking for. Competition is very healthy.

Wamda: It must be quiet different to go from the oil & gas industry to a B2C market place.

Celier: The difference is that I used to work in B2B and Jumia targets end customers.

Sales are extremely fast at Jumia, while in the B2B world, the decision making process is slow especially in the corporate world.

There are many similarities though because, in the end, a company is creating value. And [Neodyss and Jumia] are equally disruptive in their markets.

Wamda: Is it useful to have an engineering background? What does it give you?

Celier: One thing I learned from being an engineer is that you need to structure and build strong processes because execution is key. It has to be done smartly and quickly.

One of Jumia’s challenges is “reverse logistics.” Jumia offers the possibility to return products in 14 days, and it requires a lot of planning to work seamlessly. We pick up items at the customers and then we process them all along the line internally.

With all that streamlining and analytics implemented, Jumia plans on going far in 2015. “We now produce double digit growth month on month, this is something you’ll continue seeing in 2015. We are ramping up our own logistic facilities and are investing in the team,” Celier said.