Activists in the Middle East and North Africa who identify challenges in their communities must step up and create social enterprises that allow the region’s youth to address those needs in a constructive and creative manner.

Potential solutions must do three things. They should address an outdated educational system (critical thinking skills, encouraging creativity, developing hobbies and interpersonal skills), encourage moderate and proactive citizenship that is not swayed by political or religious agendas, and they must tackle poverty and unemployment from the ground up.

What does the scene look like in the Arab world?

The last few years have been notable for the rise in civic engagement in the region, whether social or political. Many credit social media for acting as a catalyst for revolutions and calls for reform in many Arab countries. Since then we have seen a lot of activists and entrepreneurs addressing many societal, political and economic issues in Arab countries.

Why is social entrepreneurship critical for this region?

Social entrepreneurship has become a necessity for the region, and it is more critical than ever. The social media revolution of the last few years has exposed Arab youth to a lot of new information, fueling a desire for change. Opportunities and education systems, however, continued to stagnate.

The revolution also allowed local and international development firms to take advantage of this appetite for change and implemented their agendas. And while few youth used opportunities afforded by social media constructively, but many more negatively influenced.

There are countless challenges, and each of the aforementioned areas can be broken down into hundreds of sub-issues to be addressed individually by different people with different backgrounds and experiences.

The concept of social entrepreneurship has its own challenges in this part of the world. Developmental work is traditionally associated with the nonprofit mentality and in many cases is accused of sinister agendas and corruption. As such, it’s difficult for community stakeholders to accept the concept of profit-making companies that address social challenges. 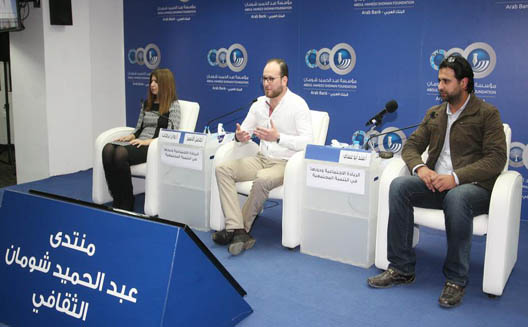 The inflows of local and foreign money have exacerbated a culture of dependency in many underserved communities. Free charity money has allowed some communities to victimize themselves and expect others to help them. Instilling a culture of independence in such communities takes a lot of hard work, creativity and persistence.

Moreover, social entrepreneurs sometimes fail to identify commercial opportunities, as they are very focused on addressing a societal problem. As such mentorship is needed to help them identify a money generating business model that can sustain their work and attract investors, while they improve their communities.

On the bright side

Luckily many social entrepreneurs that I know of in our region are raising their voices and working against many daunting odds to fulfill their missions and communicate their messages.

Many platforms have been launched to support social entrepreneurship, and offer creative solutions to societal problems in the region. Initiatives like Ashoka, KAAYIA, Badir, Ahead of the Curve, GESR (an initiative by Misr El-Kheir Foundation), and many others shed lights on different success stories, and in turn spread awareness and support social entrepreneurship. And that is just one reason to be optimistic about this region’s prospects.

Kamel Al-Asmar is an Arab social entrepreneur, and Wamda's Head of Communications & Community Engagement. He's the founder of Nakhweh and Ideation Box. Kamel is one of Forbes' 2014 30 under 30 Social Entrepreneurs and an Ashoka Fellow in the class of 2012. He can be found online at @kamelasmar.