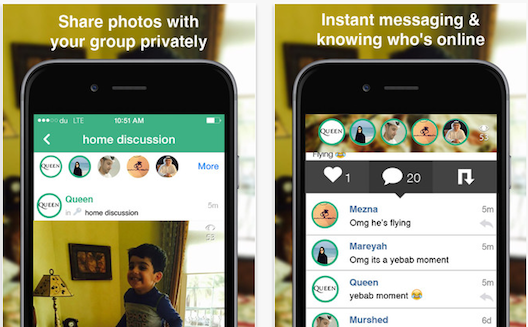 Instagram is one of the most popular social networking sites to upload and share images, but the founders of Yebab believe that their newly created smartphone app is more distinctive because of its instant photo-messaging feature.

The founders got the idea from their Yebab website, a photo directory of bridal accessories and dresses created in 2008. The project leader, Murshed Mohammad, first got the idea to translate it into a smartphone version in 2010.

Wamda interviewed Muhammad to learn more about this pilot project.

Wamda: What’s the difference between Yebab and Instagram? What makes it unique?

Mohammed: Instagram is about sharing videos and filtering beautiful pictures to appear on its networking platform, but it confines pictures to a square shape.

Yebab encourages instant photo communication between community members as well, but its distinct feature is the possibility to upload and share pictures of different dimensions. Pictures are always private and you can specify privacy properties, i.e. whether to open it to the public or only to selected contacts.

Another distinctive feature is that our app allows you as a user to see who’s online and chat with them. If you receive a comment from someone, you can reply immediately and if the person is online, his name will appear on that picture. The level of engagement is different and can be intense at some points. The main point is that you can find out how many people have seen your pictures.

Moreover, you could include a screenshot of an email or of an SMS and stir up comments on that. These could also be open to public discussion or confined to a certain group or to a selected group of people.

Wamda: How do you make revenue?

Mohammed: We created this mobile app not so long ago and we had sketched two different models to generate revenue streams. First is the advertisement model where we give space on our app to businesses and we earn when a visitor clicks on the advert we post. The second model is the enterprise version for big corporations that operate globally. Their employees are located in different countries and often have difficulty to communicate even if they work in the same building. We facilitate their communications by providing them an account on Yebab, an app specifically created to meet their demands, so they can communicate within the group or individually.

Wamda: How are you making the most of the Emirati business ecosystem?

Mohammed: We established our company in two countries: an office in the UAE to focus on business development and a branch in Jordan to take care of the technical side that includes testing and developing the app itself.

Having a foundation in the UAE has helped develop the business aspect. There are multinational companies there that you can approach easily and we are doing our best to meet the demands of these companies.

Another good thing is that everyone in the UAE has a smartphone and most people are users of Instagram and other social networks. As such they are familiar with apps like ours which makes our work easier.

Wamda: There are interesting numbers you reported on in relation to the progress. How did you make that progress?

Mohammed: Nothing happened in one day. At the beginning we started with our own adapters who tested the application’s look and feel. Public engagement was slow, but it then grew to include many users as shown by the recent statistics we provide here. For example, the number of shared images has reached 40,000.

What made us plan for this project are the pictures themselves that took us from working on a bridal website to a smartphone app. When the app went viral, we wanted to go global and move from a wedding directory to something different via photomessaging.