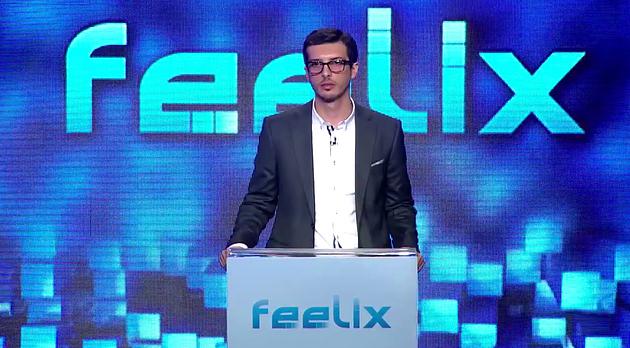 The Feelix is another wearable that may reach the market. The bracelet syncs with a user's smartphone and sends him or her messages through eight electro-tactile pads that can independently trigger up to a thousand pulses per second.

It was created by Bahraini design engineer and young entrepreneur Thieab Al Dossary, and first introduced when he was a contestant on the Stars of Science show.

He has a working prototype which he hopes to refine, and he is turning to the community for support.

Al Dossary started a crowdfunding campaign on Zoomaal, a MENA crowdfunding platform, to raise $30,000. “I have a good working prototype, but it’s still a prototype,” he said. He will use the funds to streamline and improve the original model. A finalized prototype will help attract investors, who can then help him develop a market-ready product.

This is not the first device Al Dossary designed. He created a similar device for the palm in 2006, and currently holds patents for it in the United States. “It was meant for the blind, so they could more easily interact with their surrounding,” he said. When appearing on the Stars of Science show, he used his previous experience to create the Feelix, which earned him the attention of Mohamad A. Zeidan.

Zeidan specializes in electronic design engineering, focusing on radio frequency and analog. He was impressed by the Feelix and became Al Dossary’s main mentor on the show. “He’s mature, diligent, and demonstrated high level of perseverance. He also was one of the most independent candidates, if not the most,” Zeidan said. Even after his appearance on Stars of Science, Al Dossary remains in contact with Zeidan. “I provide technical help as needed, remotely, or in person,” he said. In return, Al Dossary has agreed to give Zeidan 15% of the "benefits" from the Feelix once he starts selling it, while retaining full creative ownership.

“Trying the device was a fun experience. [..] I could see many uses for it in addition to the original use Thieab intended,” Dr. Zeidan said. Al Dossary believes the device has many different uses, it can be used to give direction by syncing with map applications, or to feel when you receive notifications on social media, and many other possible uses limited only by the devellopers of the applications.

Currently, the Feelix has two web applications. The first one is a testing application meant to showcase the abilities of the bracelet, and the other is a music application. “We need more API. [...] The Feelix program is open source so anyone can make their own program with it, [...] or adapt existing programs,” he said.

Al Dossary wants to market the Feelix, and he wants to manage a team that will help get the device on the market. He also plans to commission specialists and consultants. “I need a team, I need funding [...] I will work with them to get them to make what I need,” he said.

Al Dossary already has three patents pending for the Feelix, in the United States, the GCC and the United Kingdom. Once he has a team and funding, he hopes to release a final product with at least 5 applications in less than a year. He hopes to release the product internationally through retailers, both to businesses and developers that want to make applications for it, and to private customers.

But what is he doing first?

Al Dossary is planning to travel to the Collision conference on May 5-6, in Downtown Las Vegas, USA, and present it to a panel of possible investors.