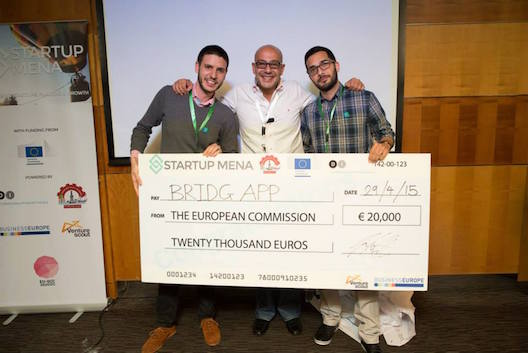 It’s go time for Bridg cofounders Moussa Beidas and Nadim Jarudi. The Dubai-based duo is in the process of finalizing their payment app, scheduled to launch on iOS, Android and Windows in the second half of 2015.

They’re also in the midst of sourcing some much needed funding. Having been bootstrapping since the beginning of their journey, they’re now in the process of raising $700,000 for the company.

So their recent win at the 2015 GCC Pitch Challenge Final has no doubt come in very handy. Palestinian-American Beidas, 30, and Lebanese-American Jarudi, 32, battled it out with 11 other startups to walk away with the top prize of EUR 20,000 ($22,670). Ozan Sonmez, who covered the event, wrote that “their concept was so interesting that people lined up during a break to see Bridg’s working prototype”.

Catching up with Beidas this month, he tells Wamda that receiving the top prize has given the team a vote of confidence.

“Our win definitely gives us the exposure we needed,” he says. “Plus, the reassurance that our idea wasn’t a bad one.”

And the cofounders, along with CTO Sultan Saadat may be onto something that could revolutionize the way we spend in the GCC and beyond. Bridg is a mobile-to-mobile payment platform that allows users to pay with their Bluetooth-enabled device without the need of a data connection.

Beidas explains how it all came about.

“During my tenure at a branding consultancy, we had the opportunity to listen to the challenges facing decision makers on a regional level,” he says. “The banking and telecom industries were unique in that they both are ready to progress to the next level. We saw them as parallel industries that could lend each other a hand. So we decided to build Bridg.

“There is no need to acquire any extra hardware or do any costly integration; just download, sign up and start paying.”

Not to be mixed with the US-based company of the same name – “There’s no relation and we’re not worried about the confusion as it is in a different industry,” Beidas points out – Bridg aims to facilitate payments in the region, eliminating the need for card machines on the go, for instance. 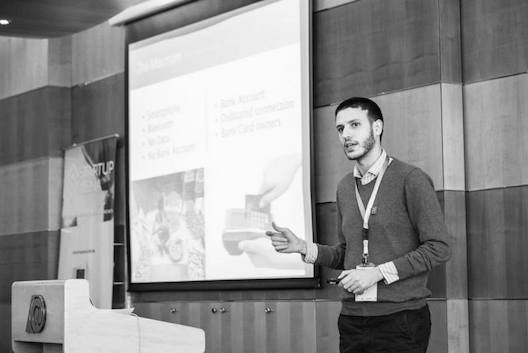 Having it work via Bluetooth means that users can pay from home, on the move, or even in the air, since it is also set to become the first mobile payment solution to work in flight mode.

“We are working on partnering with the region's most popular low-cost carriers to make sure that food wagon makes it to your row,” Bridg’s website claims.

Once launched, it could be a massive game changer for the industry here. After all, it would eliminate the need for an internet/data connection or even a smartphone, since Bluetooth is available on nearly any type of mobile phone.

Beidas continues: “We built Bridg with the intention of removing the barrier of entry for any type of merchant to accept cashless payments in any industry. In the second half of this year we plan to launch Bridg with a merchant in the UAE, followed by plans to launch in emerging markets soon after.”

Launching the project didn’t come without its challenges.

“Our team was the main focus, as it required a team willing to take the plunge,” he says. “Amongst us, we freelanced as designers and app developers, and this helped us bootstrap our way through our initial growth.

“We constantly are facing challenges on multiple facets, but we knew this before starting the company. At the core of it all, Bridg targets developing markets with huge populations of smartphone users which are predominantly unbanked and/or unconnected.

“With antiquated banking regulations, any form of disruption is considered a threat despite Bridg being an enabler. Whatever industry issues we want to solve we need to go through a process of change management to educate our customers.”

Despite the roadblocks, Beidas and his team have set some ambitious goals.

“In five years’ time, we want to be in a majority of the emerging markets; not only processing offline payments, but solving problems that existing solutions for Western markets never focused on.

“Our goal from the beginning was to build something of lasting value.”

Readers interested in receiving the early release of Bridg can register here.