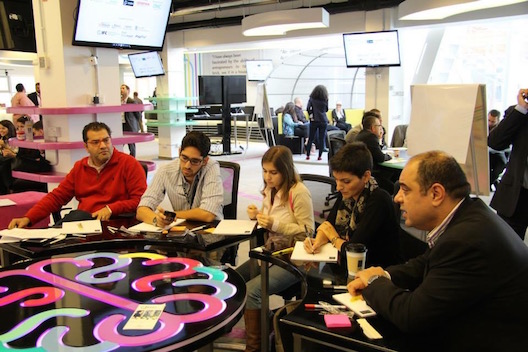 Since first signing a partnership with Wamda in October 2013, committing themselves to a Corporate Entrepreneurship Responsibility (CER) program, Jordan’s leading telecoms company Zain has advanced its support of the country’s entrepreneurs, and continued their work with Wamda.

"Our partnership with Zain is extremely important for us, it was our first attempt to show how powerful Corporate Entrepreneurship Responsibility, as a tool for innovation and empowerment, could be for big companies when working with startups,” said Aramex founder and Wamda chairman Fadi Ghandour today.

A movement created by Ghandour in 2012, CER is a regional approach to aimed helping entrepreneurs and startups grow.

Habib Haddad, Wamda CEO, was also present at the Dead Sea meeting. “The role of large corporates is quite crucial to the scaling of MENA startups,” Haddad said. “I am excited to see Zain further its commitment to Jordanian entrepreneurs and happy that Wamda has been part of this journey from the start.”

Zain is a leading operator for the region. They are one of the first corporations to commit themselves to the cultivation of relationships between startups and corporations. In November 2014 they culminated their efforts by opening their Zain Innovation Campus (ZINC), a first of its kind in the country, to act as a platform for entrepreneurs, youth and startups, offering them a workspace that engages them further with workshops, speaker series’, entrepreneurial programs and competitions, pitching opportunities to investors, and potential partnerships with Zain. Additionally, in March of this year, Wamda and Zain saw the launch of their Traxn program.

Built on the concept of CER, the Traxn initiative exists to establish a streamlined relationship between the entrepreneurship ecosystem and established corporations.

Jordan’s ifood.jo, MICEit, Alhodhud, Arabia Weddings and Sawwa7 Travel are the five startups currently in the program. They are accessing strategic mentorship, coaching and advice on how to scale, while being provided access to Zain’s channels, connections and resources. “We believe that this is only the start of valuable programs to come that will inspire, engage and support the entrepreneurial ecosystem in Jordan,” said Zain Jordan’s Hanandeh.

Ghandour added: “On the one hand it brings innovation from outside of the company, and on the other, it empowers the entrepreneur and builds the entrepreneurship ecosystem. Zain is very entrepreneurial and daring in what they are doing with CER in Jordan, and we are very proud to be their partner."