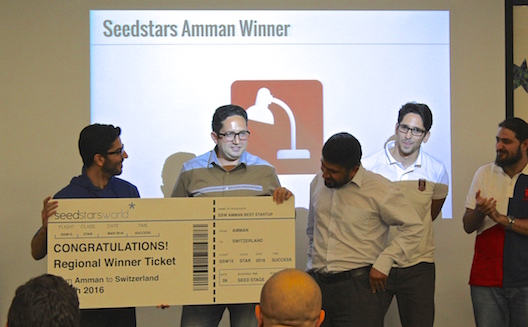 Twelve Jordanian startups gathered as regional finalists in the SeedStars World competition on July 26 at Oasis500’s headquarters in Amman. They pitched their companies in front of a crowd of onlookers and a six-man jury in hopes of advancing on to the global competition. But at the end of the day, there was only one startup left standing: Arabic-language ebookstore Yaqut.

The competition was fierce, and the margin of victory thin. After a scheduled 30-minute jury deliberation stretched to 45 minutes, it reconvened and Seedstar’s loquacious show-runner announced the finalists.

In third was Play3arabi, a tech startup offering free-to-play mobile games focused on social and multiplayer games for Arabic speakers and represented by Joseph Shomali.

In second was Redtroops and Samer Tarazi, below, who pitched his company’s interactive auction-based marketplace for in-app advertisements that bridges the gap between app developers and advertisers.

But in the six minutes allotted by Seedstars to pitch - along with a four minute question and answer session - Yaqut’s CEO Ammar Mardawi won the jury over with a powerful description of his startup’s gamfied and ad-subsidized Arabic eBookstore developed for smartphones and tablets.

His prize? An all-inclusive trip to Geneva, Switzerland in early 2016, where Mardawi will face-off against 50-70 other regional winners in a final pitching competition - at the end of which a global winner will be crowned.

The competition in Geneva will be stiffer, but the reward for the winner of the Seedstars World competition will be far more than a plane ticket. 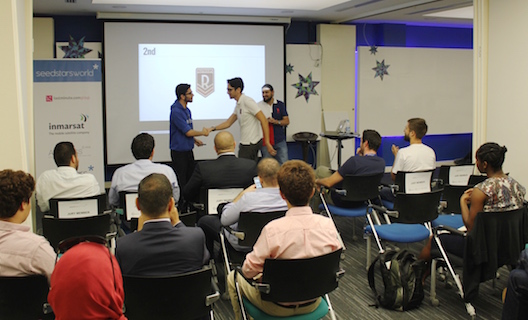 The grand prize is up to $1.5 million in equity investment, and access to Seedstar’s network of investors.

And although only Yaqut emerged from Oasis500 in the running for this lucrative prize, the event’s competition featured some of Jordan’s brightest young startups.

“Almost all the participating startups had won other awards before and it was particularly surprising that Yaqut came in first place,” says Mardawi. “Winning the competition is an outstanding confirmation that we're on the right path with our technology and business model.”

And Yaqut has reason to be pleased, especially considering the event’s keynote speech came from an alumnus of the competition, Feesheh’s Nur Alfayez, a company who’s found success since winning the regional round last year.

In order to be a part of the competition, startups had to be selected after an application process featuring some 3,000+ applicants from across the world - 600 of which made the cut. To qualify, the startups needed to be less than two years old, have raised less than $500,000 to date, and have a minimum viable product.

The other startups who participated were: Cash Basha, an e-commerce platform allowing Jordanians to shop on amazon.com and pay locally with cash; Kama, a Middle Eastern food and design startup; Mimix, an app that translates speech to sign language; Project io, a 3D visualization and image processing company; Riskopy, an online risk management toolkit for SMEs; Snackable News, a platform featuring sponsored news stories in English and Arabic; TravoTech, an online booking platform designed to help travel agencies migrate to the web; Trazec, a software tech company offering improved text rendering technology; and Trevx, an audio search engine where users can search for all types of audio files.