While most entrepreneurial ventures focus on social issues, other ventures have dedicated their efforts to raising intellectually stimulated and innovative children. 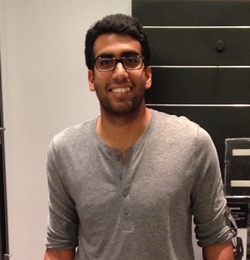 "Our goal is to provide comprehensive care that wins the parents' confidence while providing an appropriate environment for the upbringing of the child, through developing his mental and linguistic abilities," said Cairo Sitters cofounder Hossam Taher (pictured right).

Cairo Sitters offers babysitting services to homes in the Greater Cairo area. Catering for children aged 2-14 years old, they cover three categories while looking after the child: engaging them with intellectually stimulating activities; private tuition in French, German or English; educational services that combine the previous two offers, as determined by the parents.

"We use a well-proven strategy where we intensify the tutoring classes in the beginning. After that, we withdraw gradually so as to allow the pupils to rely on themselves,” Taher said

In line with other ventures, Cairo Sitters is attempting to find solutions to current social problems. They offer part-time job opportunities to a large segment of the youth population, getting them to join the caregivers' team. Currently they have 500 babysitters aged 18 to 30 years old.

The startup also makes a point to supervise the educational aspect of children's parties, through activities such as embroidery, coloring and linguistic games.

Launched in 2013 the cofounders are preparing for their upcoming app, coming in September, available on both iOS and Android - linking parents, babysitters, children and management.

Cairo Sitters has begun to make a profit.

"Our children's minds are the real wealth of our countries," said Ihyaa Academy cofounder Farid Abohadid.

He believes though, sadly, “traditional curriculums lack the excitement factor that attracts educated individuals to their studies, and helps them gain and discover new skills in themselves. This is how the idea of the academy took form. Through [this academy], we aim to unleash and direct children's potential."

After completing his studies in electromechanical engineering Abohadid decided to "elevate" the standards of education. Adopting the the theory of ‘multiple intelligences’, from American developmental psychologist Howard Gardner, Abohadid is teaching the children through creativity and innovation.

Working with children aged between 10 and 16 years old, the academy is open every Friday.

The academic program is divided into three stages: the first stage lasts three months and includes robotics, arts, music and writing. This is the part where they help a child discover their interests.

The second stage lasts six months and includes "deeper" educational programs in the fields of manufacturing, media and advertising and scientific research. This stage includes specialized courses and field trips.

The third stage is the specialization stage where students learn project management, profit models and working in a team. At the end of this stage, students start preparations to enter their final year project in the Zoqaq elhadara competition - a minature city that allows them to perform a role in a productive community.

"We started out in July 2010 with limited courses, and then once we developed the current business model, we were able to make them more lengthy and elaborate," said Abohadid.

The cofounders launched a complementary venture, called Ihyaa Canvas in an attempt to enable those over 18 to work on their talent, through writing, video-making, drawing, open discussions, and field visits.

Concerning investment, Ihyaa Academy is run by a self-funded model where cofounders retain shares. Students' participation fees are 2,100 pounds (less than $281). Trainers get paid around 100 pounds per hour (equivalent to $13).

"Most of the revenues are used to cover expenses of the activities,” said Abohadid. He also noted that the first batch would be graduating next month in August.

Since 2011, mistrust has plagued the Arabic media. This is partially attributed to politicizations of whole media channels, as well as the dominance of advertising.

"Our aim is to build a media-savvy generation able to distinguish good from bad content," said Islam Zween, founder of Danat Media. “To able to produce professional media content in the hope of fighting the current ‘trivialization’ phenomena of the [Arabic] media scene."

With this in mind Media Juniors was launched in May this year to educate children aged 7 to 16 years old about media reporting. The program includes a comprehensive overview on news reporting, photography, creative thinking and journalism.

"We try to add a touch of entertainment to our educational content," said Zween. "We strive to teach children the fundamentals of constructive dialogue and the objective reporting of a scene."

And all in a context of entertainment, where training is conducted in studios, which are often instrumental in attracting children to the programs.

Training in Media Juniors takes two forms: one month of consecutive training, or several one-day workshops over a period of three months. The fees are 2,200 pounds (less than $290).  As a way of gaining more publicity, the organizers of Media Juniors participate in one-day programs conducted in nurseries and schools, for a fee of less than $20 per child.

The cofounders of this initiatives are currently seeking an investment that would allow them to build their own studios, rather than renting spaces, and would allow for full time employees.

Should these ventures manage to expand to the Gulf, will raising a generation of entrepreneurs able to meet their dreams become a reality?