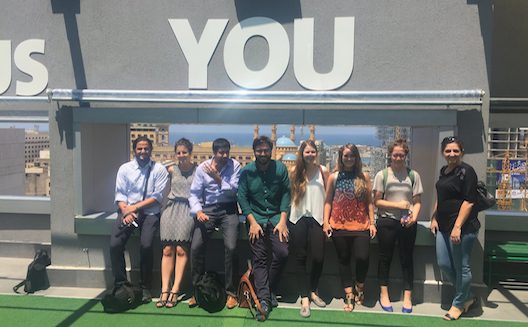 The Chileans in Beirut. (Image via BDD)

For 17 years Chileans endured a right-wing military dictatorship that saw more than 3,000 people either killed or go missing. For the Lebanese it was a nearly 20-year civil war left up to 17,000 dead or missing.

But Chile and Lebanon share more than these raw, chilling similarities. They share a love of food, mountainous landscapes that rush into warm seas, and more recently, a mildly burgeoning startup community.

Recently, over the course of a week, organized by the World Bank as part of their Mobile Internet Ecosystem Project, four Chilean entrepreneurs and ecosystem collaborators visited Lebanon and met with various members of the startup ecosystem. The objective being to learn from, and share, ecosystem experiences.

Chile is moving much faster than Lebanon towards a mature entrepreneurial ecosystem: in 2010, the South American country birthed Start-Up Chile, a product of the Chilean government looking to grow their underground startup ecosystem.

The organization was a novel one in that the pilot project invited foreigners, not Chileans, to start businesses in Chile and offered a $40,000 equity-free grant and one year work visa. It’s not surprising, then, that by 2013 Chile played host to 750 new businesses and eventually opened their doors to Chileans.

Sebastian Vidal, Start-Up Chile’s executive director was one of the visiting Chileans.

Be a doer, not a talker

Towards the end of their week, at an event entitled ‘A conversation with Chile’s changemakers’ Start-Up Chile’s Sebastian Vidal, executive director of the seed accelerator, shared the idea that part of the accelerator’s initial battle was to prove to Chileans that this was something their country needed. His finding? “A pilot program is important”, he said, whether you’re an ecosystem supporter or a startup.

“(Chile is) an ecosystem built by entrepreneurs, for entrepreneurs,” said Ali Makhzoum after the ‘conversation’. Mahkzoum, the cofounder of soon-to-launch agri startup LifeLab BioDesign, was very enamoured by this point: “banks and VCs often don’t get it, the hunger that we have [for progression].”

Finding that entrepreneurs in Lebanon and Chile had similar worries, the World Bank’s Victor Mulas believed a conversation between the two ecosystems would be beneficial. “Both countries are in a similar stage with their ecosystems,” he told Wamda.

Carolina Rossi, founder of the car sharing service yebame and now head of the Social Innovation Lab at Finis Tarrae University in Santiago, noted the similarities and differences. In particular she noted how an active Lebanese diaspora was of benefit to growing the ecosystem, something Chile didn’t have.

“Lebanon diaspora is just, amazing, it has a huge amount of talent living abroad,” she said to Wamda. “They have this global vision of moving out of Lebanon to generate change.”

Learning from one another

“Chile is a very isolated country and doesn’t have a history of entrepreneurship,” said Mulas, talking about what the Latin American country could learn from Lebanon. Unlike Lebanon where they had to work on keeping the talent at home, Chile was in a position of needing to grow that talent and changing mindsets about entrepreneurship.

And part of this growing change, according to Rossi, is about connecting people. “This country has everything to lead in the region. You just need to connect the dots, generate collaboration and unite the entrepreneurial forces to achieve one same goal: position Lebanon as the hub of innovation for the MENA region.”

One of the ways in which Mulas felt that Lebanon might excel was in the creation of something similar to Chile’s Ideas Factory. Described as a meeting point for all those within the startup ecosystem, from investors to testing labs, their aim is to keep growing an integrated and collaborative environment.

Alejandra Winter, the operations director at Ideas Factory, spoke about how adding value to an economy, which was largely commodities based, was key to their ecosystem growing. In Lebanon, the Beirut Digital District (BDD) is on a course to becoming something similar, in providing a physical, and connected network for ecosystem players.

“We were inspired by their stories of entrepreneurial transformation,” said BDD’s Christelle Abou Jaoude, adding that they would be taking some of their actions in Chile, on board in Lebanon.