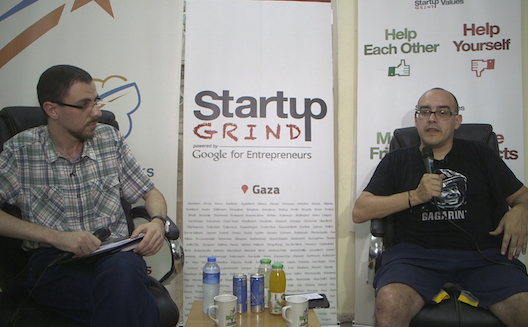 Despite difficulties, Dave McClure, right, managed to get to Gaza for its second Startup Grind event, and it was a success. (Image via Ain Media)

The difficulties of getting into Gaza didn’t deter Dave McClure. The prominent angel investor and founding partner at 500 Startups was the guest of honor for Startup Grind Gaza’s second event in Sunday, but first he had to get there.

To be sure, McClure already was scheduled to be in Palestine. He spoke at Startup Grind Ramallah last Thursday, but entry into Gaza required a different visa that could only be obtained from the Israeli government; the application process began many weeks prior. And it’s nearly impossible for Gaza’s entrepreneurs to get permission to leave the strip, even if it’s to simply hear McClure speak in Ramallah.

It took over a month and the assistance of Mercy Corps to get McClure permission to visit Gaza. But persistence paid off, and Gaza’s entrepreneurial community turned out in force on Sunday to hear him speak.

The event was an opportunity for Gaza’s startup community to benefit from McClure’s insights, and for McClure to get a small taste of the conditions in Gaza.

“Tough backgrounds breed resilient and nimble entrepreneurs,” McClure said, when the power went out. “This happens in Asia, too. Stop worrying about lack of electricity, focus and build great online companies.”

Rather than develop major hardware or software applications from scratch, McClure urged the audience to focus on service startups for the Arabic speaking market.

He also discussed his company’s current investments in startups in Jordan, Bahrain, Egypt, and he noted, possibly in Palestine.

With the high rate of education in Palestine, McClure believes that the area can become an information hub for the Middle East.

“Palestinians are highly educated and can penetrate the Arabic market easily. The next big thing, like Facebook, could come from Palestine, why not?” he said.

Startup Grind Gaza was launched with two goals in mind, said Rafat Abushaban, director of Startup Grind Gaza and Wamda contributor. The first, the “inside-out” goal, is to give entrepreneurs in Gaza enough exposure to the international startup scenes emerging through the world.

“There is a lot of talent here, and other than the closures and borders, entrepreneurs here don’t have the expertise that outside customers want,” Abushaban said. “They learn from books, in courses or from certain organizations.”

The second goal, “outside-in”, is to announce to the world that Gaza has a thriving and growing entrepreneurial scene.

“There is something going on in this part of the world, in Palestine, and in particular in Gaza,” he said.

Abushaban and his fellow organizers aim is to support and grow a digital economy and new wave of startups in Palestine.

Creating the first actual successful entrepreneurial story in Gaza is something Abushaban is passionate about and hopes Startup Grind will play a major role in a flourishing ecosystem.

But with border closures and restrictions imposed on Gaza residents, inviting speakers like McClure is not easy.

Still, for the sake of networking, they prefer to have speakers there, in person, rather than on Skype.

Further setting Startup Grind Gaza apart from other chapters around the world is that entry is free.

These tactics seem to be working. So many people showed up to hear McClure speak that they ran out of seats.

“As an entrepreneur, meeting the man who founded 500startups was a remarkable moment, he has the experience of 1,000-plus startups,” said Omar Jouda. “His story was inspiring and his advice was extremely helpful."

A handful of startups from the accelerator Gaza Sky Geeks had the opportunity to pitch to McClure, following the Startup Grind event. He urged entrepreneurs to focus on building businesses for Arabic speakers with Arabic content. With the surge of mobile, McClure suggested that they look at SMS services and mobile apps.

When asked if he’d be willing to invest in startups in Ramallah and Gaza, in a relaxed tone, McClure said, “why not”?

Abushaban said he was delighted to introduce McClure to Gaza’s startups.

“He got to witness our thriving ecosystem, which we think has triggered his interest in the region even more”, Abushaban said.

Perseverance despite incredible odds was a common thread throughout the event.

“I am a very positive person,” Abushaban said. “A lot of people I meet are so frustrated with the situation here, but I do think there is a potential for growth. There is something we can bring to the world.”