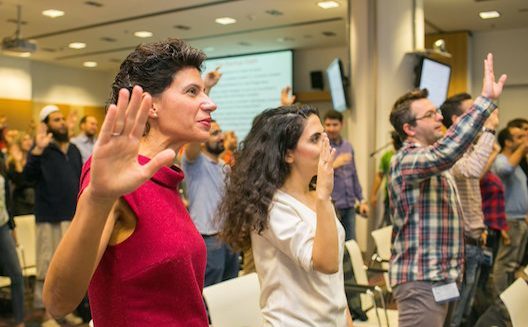 This year's Startup Istanbul has highlighted a serious lack of local investment in local startups.

This was made obvious by the fact that not one Turkish startup made it into the group of 17 finalists who pitched to the international judging panel.

Although the standard of international competition was very high, some local entrepreneurs told Wamda the lack of investment in Turkey was a considerable obstacle to the success of their businesses.

Big local investors are often cautious, if not reluctant to offer their support to new tech startups, citing a lack of familiarity with the industry.

This is resulting in a lack of financial capital available to startups and an the absence of corporate support activities, such as marketing and PR, which would assist Turkish startups to better promote themselves internationally.

It should be noted that finalist wepress, a self-service app catering for freelance journalists, cofounder Erbil Sivaslioglu is an Istanbul native.

But there were winners

The runner-up spot went to the Indonesian startup igrow, followed by project management platform taskulu from Iran in third place.

Entrepreneurs from across the Middle East, as well as from as far afield as Pakistan, Nigeria and Indonesia, spent several days at the Lütfi Kırdar Congress Center in downtown Istanbul. They worked with experienced mentors to perfect their sales pitches.

In the end, the competition came down to a three-minute presentation in front of a live audience of several hundred, followed by a brief but challenging Q&A session.

Passing judgment on the 17 finalists were well-known Silicon Valley entrepreneur and academic Steve Blank, Teru Sato from Beenext and Andrea Barrica from 500 Startups.

One of the most interesting startups to surface was that of 16-year old Bahar Khan Akhunzada from Pakistan whose data security company Securitywall was amongst the high caliber finalists.

Burak Büyükdemir, event organizer and founder of Turkish accelerator Etohum, was clearly very happy with the way things had panned out.

“This year’s Startup Istanbul was amazing and the number of attendees from so many countries had shown just how internationalized it had become,” he said.

Both Büyükdemir and co-master of ceremony Ozan Sönmez have years of experience assisting and providing guidance to local startups in Turkey as well as internationally.

Investor interest
Government support, where it is forthcoming, comes through the Sanayi Bakanligi (Ministry of Science, Industry and Technology) and organisations such as the Tubitak (The Scientific and Technological Research Council of Turkey), but the administrative process of applying for funding can be bureaucratic and cumbersome.

Yet, these barriers to growth have not put off some savvy international investors who see big potential in Turkey.

Renowned entrepreneur and prominent angel investor Dave McClure already has investments in eight Turkish pre-Series A startups and 20 in the MENA region.

He plans to increase that number next year through his company 500 Startups.

Japanese e-investor and entrepreneur Teru Sato is also looking at investing further in Turkey to add to the five startup investments his company Beenext has already made.

For Sato, Turkey’s main appeal is due to its geographic position between Europe and the Middle East, and the accessibility to several tech markets. Yet he admired the quality of software engineers and the entrepreneurial spirit that, he says, is pronounced both in Turkey and the region, giving the country something of a competitive advantage over other emerging markets.

Sato said it was necessary however to point out that a more flexible workforce and a positive outlook towards businesses needed to be developed for tech startups to reach their full potential.

Both Sato and several attendees highlighted the need to better promote local successful stories in order to improve the startup ecosystem in Turkey. They said that by doing so there was a much greater chance that Turkey, and Istanbul in particular, could become the regional tech hub for entrepreneurs that many believe it can be.