Digital companies in Iran are flourishing, carving out a space in the local market in spite of the restrictions on foreign trade and imports – and partly, perhaps, also because of them.

What they do not seem very good at, however, is getting the attention of news outlets and obtaining media coverage. And this is where digital marketing company Akhbar Rasmi Media Agency is helping.

“Companies in Iran don't know how they can write their press releases and then how to distribute it and how to target journalist and media outlets,” Akhbar Rasmi cofounder Majid Kasiri told Wamda. This was especially true for SMEs that often don't have the skills to communicate their products to their market. 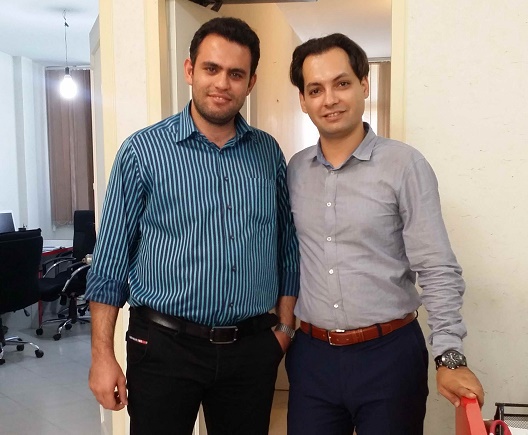 Kasiri, a former journalist with almost eight years of experience in the industry, understood that the lack of communication skills could provide a viable business opportunity.

The name, Akhbar Rasmi, means ‘news release’ or ‘official news’ in Farsi, and it’s very similar to the global PR Newswire platform, which distributes press releases from thousands of clients.

It provides companies with an easy-to-use dashboard where they can create press releases (from scratch or using some pre-made templates), and then distribute them to the journalists registered to the service.

Kasiri, Mostafa Morshedi, serial entrepreneur and founder of Rasis Corporation, and Mehdi Jahani Moghaddam, the “software magician” who later joined the team and became cofounder and CTO, built the online platform to connect businesses to journalists, bloggers and industry influencers.

The freemium business model means the site is totally free for journalists.

Companies can try it for free for one month and then upgrade to the premium plan, which costs $150 USD per month. The other option is on a pay-as-you-go basis which costs $100 per new release, for clients unsure about how many press releases they want to send each month or if they just want to test the service more.

Kasiri said the idea came three years ago, when he started to look at foreign business models that might suit the Iranian market. One aspect was localizing aspects of international newswire services.

In the six months since the startup officially launched more than 2,000 journalists, around 600 media outlets and 400 companies, all in Iran, have signed up to the service.

They’re aiming for more than 2,000 companies and 5,000 journalists and media outlets in the system by the end of next year.

“We are [seeing] 25 percent growth in the number of companies using our system each month," Kasiri said. "Even governmental companies are using us because we provide them with access to media outlets based on different targets, allowing them, for instance, to reach journalists interested in specific kinds of news from certain locations."

The launch came after an incubation period in Tehran's Avatech accelerator, a stay which also introduced the startup to investors.

“We are very lucky to be accepted by Avatech. We started our acceleration program last September and then within the next six months we ended up showing up in front of hundreds of investors from different sectors,” Kasiri said.

Two investors were both angels who knew Kasiri, one working in public relations and the other for a private company, and the third Iran’s leading tech VC Sarava.

“Our first criteria, when deciding where to invest, is the team,” Sarava CEO Said Rahmani, told Wanda.

“We chose to support them with a few hundred thousand dollars - we don't always disclose exact numbers - because we believe they are a great team, passionate about what they are doing. I also believe they have the potential to expand regionally, and as sanctions are lifted, hopefully, they will also be able to find and distribute their news releases globally.” 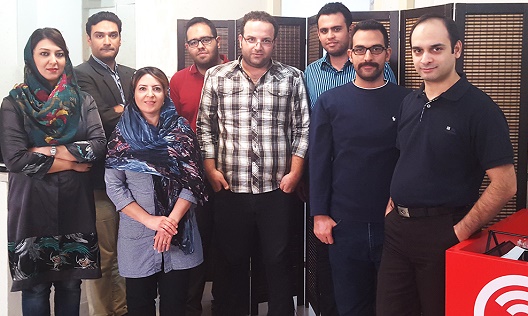 The current Akhbar Rasmi team. In six months, the startup aims to be 20-strong.

Plans to take over the world

Within the next six months, the founders want to introduce some paid features for journalists, such as access to real-time financial statements and releases from companies listed on the national stock market, and transform the service from a one-way platform - companies targeting journalists - to a two-way one.

“Right now, we are pushing the news into the journalists' dashboards but for the next year we are becoming a two sided platform,” Kasiri said. “For example, the journalist can say what topics he or she is working on and then ask our experts in our directory, many of them managers of companies, to provide content for them.”

Last but not least, by the end of 2016 the team hopes to launch a new version of Akhbar Rasmi that will target a global audience as well. To expand internationally, further funding and mentorship will be needed and Kasiri has already started looking for both.

The startup’s first international trip was to the Startup Istanbul competition in Turkey, earlier this month. But, as for much of Iran’s business sector, few international investors are willing to move until economic sanctions are lifted.

“We got a lot of interest from international investors, there” he said. “The only problem is, they are waiting to sanctions to be removed see what happens next. I believe that, up to the next year, we can have international expertise.”

If, as it seems, the sanctions will be lifted next spring, this could for sure help boost the growth of the Iranian startup scene, and represent a boon for companies that hope to scale internationally, like Akhbar Rasmi does.

That doesn’t mean, however, that scaling will be easy or that success is guaranteed. More openness, will mean more competition as well. There’s no shortage of 'PR Newswires' with global ambitions in the world, and some of them might seize the opportunity to expand in Iran as well, occupying Akhbar Rasmi’s hard-earned space.