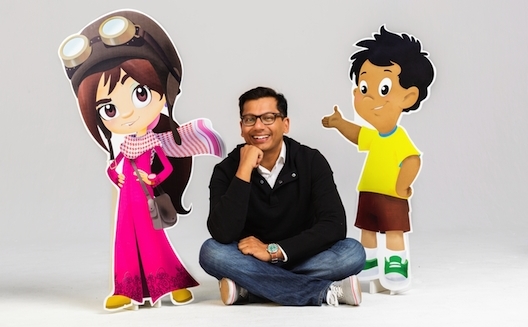 Founder Dinesh Lalvani with some of his characters. (Images via AppyKids)

Before becoming the Samsung Galaxy Tab regional ambassador for kids, or starring in the first Arabic cartoon webisode series, Zee was simply a character sketch for Dinesh Lalvani.

Before Zee, Lalvani launched the characters of Alfie, a young Indian boy, and his best friend Haathi, a baby elephant, with an interactive storybook on the Apple app store.

All three undeniably adorable illustrated characters now lead the pack at AppyKids, an edutainment app and content developer for children in the MENA and South Asia. Lalvani is the founder and CEO of AppyKids.

The launch of Alfie is a direct result of Lalvani’s many futile attempts to teach his then two-year-old son his first words in Arabic and Hindi. He hoped his iPad would come to his aid.

“Kids today naturally gravitate to the iPad, it’s their device,” Lalvani explained. “Even at the age of two, they don’t know what this device does, but it’s very intuitive for them.” However he found nothing to his liking on the store, quality-wise or ethically. “There weren’t that many books on the matter either,” he added. 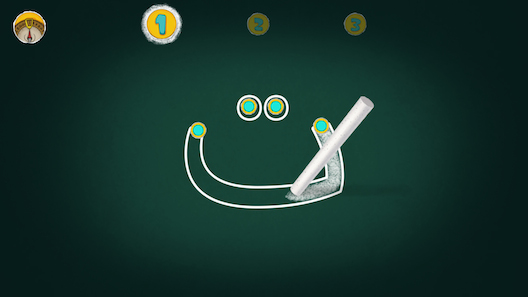 A still from 'Zee Writes'.

An established entrepreneur in the technology and marketing sector, Lalvani turned to his own experience for a solution.

Trained as a developer and designer, Lalvani launched his first startup in India and then cofounded Dubai-based digital media agency, Flip Media. In 2012, Flip Media was acquired by Publicis Groupe.

Sitting on the board of a local school and coming from a family where many are in the education business definitely helped the cause too.

Integrating his expertise under the single rule of creating content that had a gamified, fun factor, Lalvani launched AppyKids under parent company Growl Media. Established in 2013, Growl Media is a content company aiming to “educate, entertain, empower”. 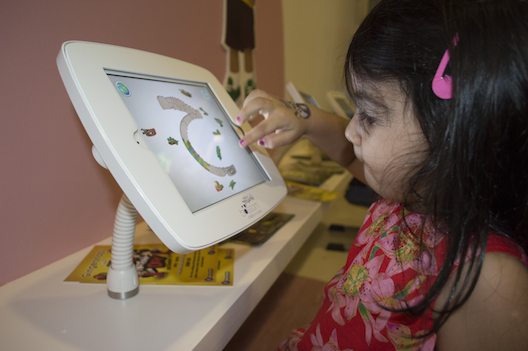 A young learner with AppyKids.

Within the first month of launching, AppyKids reached number one on the Apple App Store in 17 countries. Today, its apps have generated 2.2 million downloads with Zee's Alphabet and Alfie's Alphabet Hindi app voted the best of Apple 2014.

The app content targets children (7 and below), moms and teachers in the MENASA region.

The world of educational apps for kids is not without variety. Globally, there’s Disney, Toca Boca, PlayKids, Fisher-Price, Paper Boat, and Nickelodeon churning out interactive educational apps for kids. Regionally, the choices are limited and include Media Plus, Lamsa, EduKitten. With global ambitions, AppyKids considers the former list as competitors. 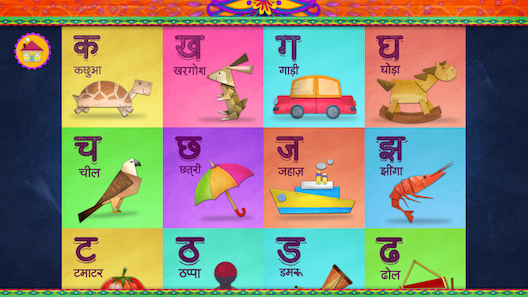 A still from the 'Alfie's Alphabet', the Hindi alphabet learning app.

With no real marketing budget, a grassroots approach of personally going to schools and talking about AppyKids, is among their key outreach strategies.

“We go to schools and talk to moms and are always presenting to educators,” said Claire Lalvani, chief marketing officer at AppyKids. They are currently used in 80 schools around the UAE.

“We encourage this concept of co-viewing,” Lalvani said, “where the parent and the child are a part of this journey together. We always ask parents how we can create better experiences.”

To seamlessly update and adapt the content to the current market, Lalvani and his team developed their own proprietary app development framework, Eureekah. This allows the team to build prototypes and immediately go into testing with kids, parents, and teachers. Often, development happens in parallel to the testing.

“We grew up with the mouse and keyboards. Our kids are growing up with swipes and gestures,” Lalvani added. “And that is our challenge - how do you keep up with this constant evolution?”

Since its launch, AppyKids has grown to include 15 apps, a cartoon webisode series and will soon launch an Interactive PlayKit. To help with the process, Lalvani brought Avantika Hari, an award-winning filmmaker, on board as Chief Creative Officer.

Based in India, Hari also believes there is a desperate need for “great content for our kids”.

“Children here consume a ton of adult content,” she explained. “There is not much content targeted at them, and if it is, it comes from an entertainment space. There’s nothing with much meaningfulness.”

On the future of AppyKids, Lalvani said, “Our aspiration is to provide really good quality content on this side of the world in the [local] languages with all the cultural markers, but also make it fun and experiential and immersive for the kids.”

The Interactive Play Kit is another step in building immersive experiences for children and also breaking out of the screen. The Play Kit is a global physical product launching in 2016. From a business side perspective, this is also easier to monetize and enables AppyKids to unlock much larger platforms said Lalvani.

A homegrown business, Lalvani said the region has got a fantastic opportunity to be a hub of innovation, but it could use a bit more of a risk appetite.

“What’s missing in the Middle East or at least UAE is not a great ecosystem of startups,” he elaborated. “There needs to be a framework that allows for innovation to happen, allows for failures to happen. That’s how you create that ecosystem, that infrastructure where people are comfortable saying I’ll start a business here and investors will say the same”.

To that end, with the exploding app economy regionally and globally, Dinesh believes it’s on developers and designers to take their work up a notch.

“A lot people make the mistake of taking something and saying they want to create an app [out of it],” Lalvani said. “It should come from a personal space. We have moved beyond funding an idea, you have to have a prototype…There are a million ideas. Execution is tough.”