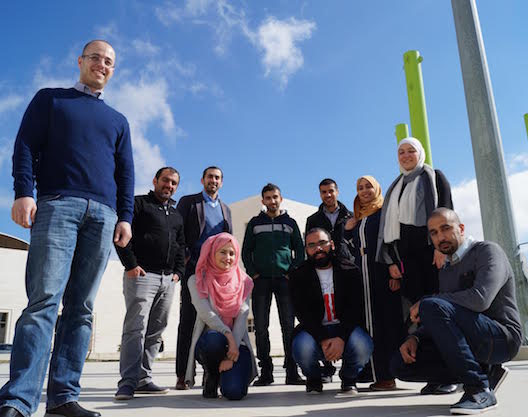 In the near future, technology is widely expected to revolutionize classrooms worldwide, providing teachers and students with powerful e-learning tools.

That was the thinking behind Jordanian ed-tech startup EDaura, which in the first week of February 2016 launched an education software platform designed to give teachers a simpler and intuitive e-learning system.

“We feel that this app is designed by teachers for teachers,” says Muneer Saifi, one of EDaura’s founders.

And after finalizing a three year deal with the United Nations Relief and Works Agency, or UNRWA, in December 2015, teachers working in some of the world’s toughest learning environments will soon get access to EDaura’s app.

In August 2016 EDaura will introduce a white-label enterprise version of the platform to 500,000 students and 22,000 teachers in UNRWA schools in Lebanon, Jordan, Syria, West Bank and Gaza.

According to Saifi and EDaura CEO Nidal Khalifeh, their platform is intended to contrast with well-known learning management systems, or LMSs, like Blackboard or Moodle.

They created EDaura’s software to appeal directly to teachers, rather than entire schools or universities.

LMSs like Blackboard are usually feature-rich and are adopted, implemented, and managed by a school’s administration. Khalifeh and Saifi say that big, complex e-learning systems like this can intimidate teachers and students, discouraging them from using the technology.

Khalifeh and Saifi know this because they found out the hard way.

Khalifeh has worked in close proximity to MENA’s education sector for years as part of his family’s business, selling education-related hardware like projectors and chalkboards. In 2012, Khalifeh saw an opportunity to put this experience to work after witnessing the popularity of tablet devices and the frustration schools were having utilizing them.

“I know how they spend their money and how teachers are suffering from all the software that management is buying,” Khalifeh said.

He teamed up with Saifi to develop education-focused software for tablets.

“At that time we were just developing, and one of the schools called us and said we want your help,” he said.

A Jordanian school wanted to digitize its textbooks to cut down on the amount of materials its students needed to carry.

In response they began developing software under the name Kalboard360. It started out simply enough, but soon the project veered in a different direction.

“We fell for the requests of the schools,” says Saifi. “They started to add more features and we ended up building the biggest system.”

The result was a bloated, complex LMS that intimidated many teachers and students when schools implemented the software. They tried marketing the platform across the region, specifically the Gulf countries, but without much success.

Instead of slogging on, Saifi said they instead chose to use Kalboard360 as a learning experience and pivoted the company.

“Listening to the customer is not always right,” Saifi said.

Khalifeh, Saifi, and their team began developing a platform that would be the polar opposite of Kalboard360. They called it EDaura. 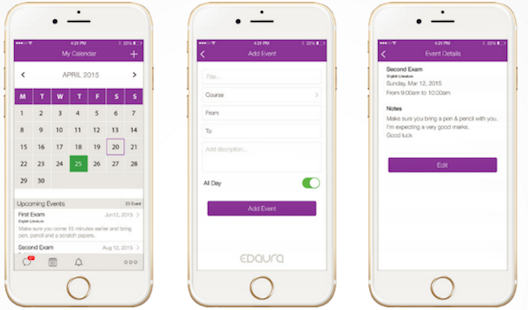 Instead of an elaborate, top-down LMS, the EDaura software was designed to be a simple, bottom-up platform that could be eventually scaled.

To do that, EDaura built a platform consisting of five basic features: a course builder, a chat function, a calendar, a resource library, and an assignment portal. Additionally, EDaura is cloud enabled and has a mobile app.

EDaura is designed so teachers can quickly set up the software on their own, without a school’s administration overseeing the process.

“As a teacher you can immediately engage with your students the minute you start using the app," Khalifeh said.

A focus group of teachers from North America and Jordan was utilized to pinpoint the features teachers, rather than schools, wanted.

But EDaura has left open the possibility of scaling the app into a school-wide system.

“If the school wants to buy the enterprise edition and get a dashboard, they can do that, create content and join it to your already existing account,” Khalifeh said.

Other Jordanian startups also have their eyes on the sector.

Skoolizer, which launched a month ago, helps students manage their studies through features that include calendar, notes, and checklists. The website is designed to reduce distractions by eliminating games and advertisement. Its SNS is similar to Edmodo, a closed social LMS customized for schools.

Skoolizer is dedicated to university students. Its founder, Yousef Ibrahim, believes his service offers its members a complex outreach.

"Through Skoolizer you can follow an instructor of a different institution or in a different country rather than being restricted to your own environment," he said.

“We are a freemium product with the option to go enterprise,” says Saifi.

Despite the software’s bottom-up design, EDaura won its contract with UNRWA because the agency saw its simplicity as an easy way to implement a consistent e-learning system across a large-scale operation.

A good fit for UNRWA

“Imagine if you’re UNRWA and you have 22,000 teachers, and you want to create accounts for those teachers, it’s a nightmare,” Khalifeh said.

Khalifeh says that while negotiating the deal, someone from UNRWA said it usually took six months to get all their teachers registered as users on their education software.

“I said we only need one week,” Khalifeh said, stressing the careful attention given to creating a simple sign-up process, which is not unlike registering for a social messaging app like WhatsApp.

EDaura is currently finishing up development on UNRWA’s platform, which features numerous customizations and collaborations with the agency’s IT team. The platform is currently offered in English only, but by the time UNRWA’s system is launched it will be multilingual.

Until then, the team behind EDaura is working to establish the app in MENA and North America and busy gathering data from users to update and improve the app.

EDaura’s founders are also looking for investment, something they’ve initially struggled to attract. But the UNRWA deal has changed that outlook, Khalifeh said.

“It made a big difference to investors, they’ve been talking to us seriously,” he said.

Whether or not investors end up taking them seriously, Khalifeh and Saifi both do take EDaura very seriously and hope it can make noticeable impact in MENA and beyond.

“If you look at the region, I think education is the only hope,” Saifi said.