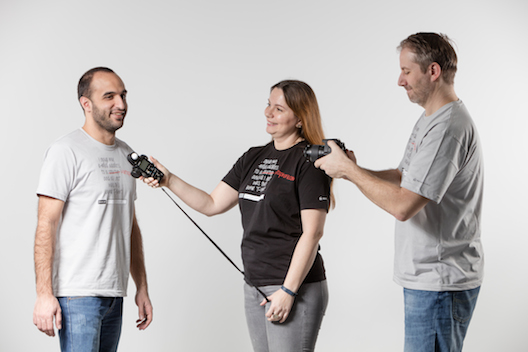 Jordanian startup Metaphorio says they are “disrupting the [video] industry”, as the increasing use of mobiles and online streamed content drives web video production.

Currently, the target consumers are freelance and agency video creatives. The team behind Metaphorio, which recently graduated from Flat6Labs Abu Dhabi’s second cohort, are siblings Khaled and Nadia Husseini and developer Waleed Qadi and this is their fourth startup together.

Streaming services, such as Netflix and Apple TV, and mobile apps have affected the way advertisers reach consumers, and they are now developing video content that can be viewed online and not just on television.

Digital advertising is also growing in MENA with platforms such as Instagram hosting 400 million users worldwide. Instagram is now offering 30 second video ads to companies in the region to reach consumers as they scroll through photos on the mobile app.

Regional companies are partnering with online video platforms to develop content for consumers. For example, DMS, the digital media arm of Choueiri Group in MENA, announced in 2015 its partnership with global online video platform Dailymotion, one of the largest video platforms in the world with a reach of 265 million views in MENA alone. DMS now serves as their exclusive advertising sales representative in the region.

The idea for Metaphorio came from challenges and pain faced by Khaled and his team in 2011 with their startup Ishra7.

Their client base was growing and the team was facing difficulties managing several different projects efficiently. “At one time we were using eight different tools to manage projects, including Dropbox and Base Camp,” said Khaled.

They’ve already gone global and have customers in over 80 countries. The goal is to get as many beta users to try the product and they have showcased the platform on social media and developer communities, such as betalist.com.

Yet, as video production is so fast paced and industry players do not slow down to try new tools, challenges remain.

The challenges for Metaphorio resonate throughout the industry itself and are present in two categories in the industry, the video-makers in the business and the explainer video space.

It takes into consideration advertising agencies and traditional agencies trying address the demand for video. Many people are trying to simply understand the sector itself, much less new tools for it. As a result they default to existing tools, such as Dropbox, which works as platform for collaboration and sharing during video production.

The cofounders explained that people are using any tools available and “not strategizing about using efficient tools” leaving the challenge to getting people to adopt the product and slow down to adopt it. Khaled noticed that once people watched a Metaphorio demo, they have “an aha moment” and see the value of the platform.

The team’s plan is to raise funds and focus on four main geographies (UAE, London, Bristol and Bath) in the next six months.

Khaled said that Metaphorio hopes to “make that connection as opposed to making people use tools independent of each other”.

Although there are some competitors for Metaphorio in this field globally, such as Wipster, many do not focus on collaboration during the video development phase. Metaphorio is attempting to distinguish itself from such competitors in the market by focusing on teaching users to use efficient strategies in their video production process by using their platform.