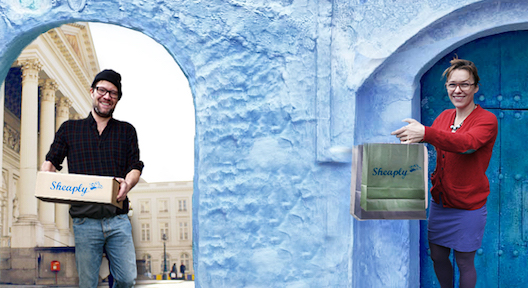 Moroccan ‘crowd-shipping’ startup Sheaply is heavily focused on its home market, but it was Jordan where their biggest break came from.

Sheaply connects individuals wanting to receive products from overseas with travelers who can bring them to that country for a small fee.

Hicham Zarrouky and Yassine Zyad, two formerly Paris-based consultants, launched the startup in December 2014. After participating in a three-month acceleration program at Oasis500 in Amman in 2015, the startup landed a partnership with regional logistics company Aramex.

Today, the founders say Sheaply boasts over 18,000 users, mostly from the Moroccan diaspora, including young executives and students. They estimate that the number of daily transaction is 10, mostly documents, high-tech, fashion, and cosmetics products.

The crowd-shipping concept started around three years ago.

In Africa, many need to collect packages from abroad, whether it’s a shipment from their friends or family or a product they can’t find locally. The high cost of international shipments catalyzed the new industry.

Today, several sites offer similar services across the world but only a few of them, such as Bistip in East Asia and Piggybee in Belgium are succeeding.

In the Arab world, competitors include Zaagel in Egypt and Friendshippr in Dubai.

Zaagel caters to a similar customer base, but focuses on the United States and online purchases only. The company is now only using Facebook to manage requests while they update their website. Traffic, said Zaagel founder Mohamed Kash, had grown organically.

Dubai-based Friendshippr raised $670,000 in order to grow the business in 2013  and have nearly 65,000 fans on Facebook. Transactions are limited to friends of friends and amount to about 150 per day, said cofounder Ramy Assaf. 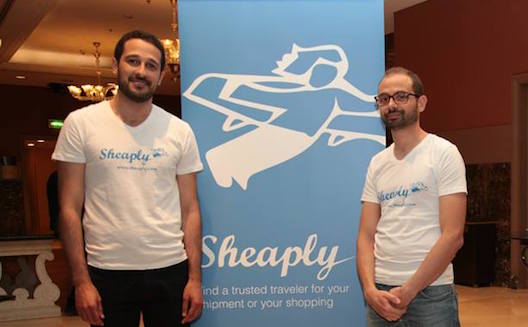 In response to the lack of investors and accelerators in Morocco, Zarrouky and Zyad headed to Jordan in April 2015, when they were accepted into the Oasis500 accelerator.

They added daily discussions with users and rolled out improved client support. These iterations led them to a 300 percent increase in transactions over the course of the program.

The founders said the trip was an opportunity to better understand the region’s diverse startup ecosystem and to develop a pan-Arab network.

During their time in Jordan, the partners were able to build a relationship with Aramex founder Fadi Ghandour, one of the most active entrepreneurship evangelists in the region. (Ghandour is also the founder of Wamda and sits on its board.)

In August 2015, after discussions with a range of different logistics companies, Zarrouky and Zyad signed a partnership with Aramex. It means Sheaply users who can’t find a traveler to bring their parcel back receive a discount of up to 30 percent on Aramex shipping. Sheaply shares the revenue and it means user requests can always be fulfilled.

This isn’t the first startup partnership Aramex has explored. Among its latest launches is the creation of services for e-merchants with ShopGo and the launch of crowd-sourced shipping in five countries in Africa and Asia.

Rather than expand to Europe or the US, Sheaply continues to look to MENA and Asia’s markets.

To strengthen their position in Morocco and expand, first to Egypt, the founders are currently fundraising. But it hasn’t been easy for them to raise money in Morocco.

“We quickly realized the lack of maturity of Moroccan investors and angels, probably due to the fact that no ‘Made in Morocco’ unicorn has seen the light yet,” Zarrouky said.

In the Middle East, he reckons the “mindset is much more mature and very influenced by Silicon Valley”. The startup is currently in talks with investors.

If they go well, Sheaply will be able to prove that Morocco’s startups can do more than meet a local need, and in fact offers regional and even global products.