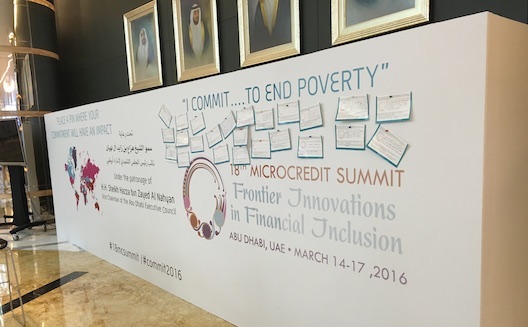 A wall for commitments to financial inclusion. (Image via Microcredit Summit Campaign)

“The Arab world has the lowest level of financial inclusion”.

This was the statement made by Dr. Abdulrahman Al Hamidi, director general and chairman of the Arab Monetary Fund (AMF) at the opening of the 18th Microcredit Summit in Abu Dhabi in March.

He cited World Bank data stating that 16 to 17 million small businesses in the Arab region have no access to financing and official financial services.

The theme of the summit ‘Frontier Innovations in Financial Inclusion’, attracted 1,000 delegates from 60 countries. Jointly organized by the Khalifa Fund for Enterprise Development, the Arab Gulf Programme for Development (AGFUND), and the Microcredit Summit Campaign, the event was held March 14-17.

Microcredit is defined by the Grameen Bank as small loans given to the very poor for self-employment projects that generate income, allowing them to care for themselves and their families. For Larry Reed, founder of the Microcredit Summit Campaign, the goal of the summit was to gather professionals and remind them how their work fits into a larger global movement.

“One of the lessons we learn from microfinance is that every person can be productive in some way,” Reed explained. “And that everyone benefits when the poorest are able to support themselves.”

UAE as a unique ecosystem

Mouza Al Nasri, director of entrepreneurship development at the Khalifa Fund, was one of the panelists on ‘Empowering Women Through Financial Inclusion’. Talking about the UAE, a country home to a booming SME economy, Al Nasri said this unique financial state in the UAE means there is still work to be done on extending microfinance to others in the region.

“There are not many informal businesses here like other countries,” she said. “It’s costly to start a business here. You need to get a license….and there is a legal framework.”

But, Al Nasri said there were also many businesses which do not fall under this formal business category and do not need huge loans. For them, the Khalifa Fund developed a specifically-designed microfinance initiative offering loans of 100,000 Emirati dirhams to small businesses via debit card. H.E. Abdullah S. Al Darmaki, CEO of Khalifa Fund said small and micro businesses constitute more than 40 per cent of the total projects financed by the Fund.

The evident political instability in the region is another reason to push for microfinance, said Katia Hilal, chief operation officer of RedCloud, a technology firm offering financial at a low cost. Hilal was one of the speakers at the Summit.

“There’s a whole generation that is lacking education because they are simply living in a state of war,” Hilal told Wamda. “In the next few years, microfinance will be the solution to helping these people get through the situation and get them back into the economy.“

Where microfinance can go

The Arab Gulf Program for Development (AGFUND) is already playing a prominent role across the region in helping stabilize countries through facilitating micro businesses and microfinance.

In 2014, the AGFund supported ‘Access of Women to Microfinance and Support to Victims of Violence’, bringing training and income opportunities for over 4,000 women affected by violence in Yemen.

The Summit also hosted the 2016 AGFund International Prize for Pioneering Human Development Projects, announcing Habitat for Humanity as the winner of the top prize, receiving $200,000.

At the closing ceremony, the Summit partners announced a ‘Declaration on Economic Empowerment and Social Inclusion’ to enable the success of the Universal Financial Access 2020 goal, the World Bank 2030 goals, and the UN Global Goals.

The Declaration recommended using technology to build an accessible payment system as well as to developing legislation to encourage banks and other financial institutions to loan to micro enterprises. The statement also recommended extending agricultural value chains to small scale farmers and building partnerships that increase social inclusion for all, by way of financial inclusion. 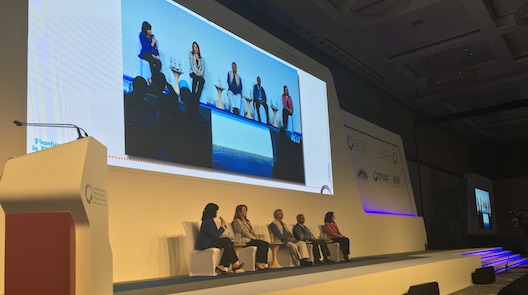 Professor Yunus, third from left, on the ‘Scaling for Social Impact’ panel. (Image via Archana Menon)

Known as the father of microfinance, Grameen Bank founder Muhammad Yunus was the Summit’s keynote speaker and stressed that microfinance was at the root of solving the most widespread issues today.

“If you look at human problems - unemployment, old age, poverty - each one of them is a global problem,” he said. “Microcredit is a social business. It’s applied in Bangladesh, Haiti, Brazil or Mexico [and] it also works in the richest countries in the world like the United States. Microcredit has no borders in dealing with human problems…it’s a non-dividend approach to solving human problems.”