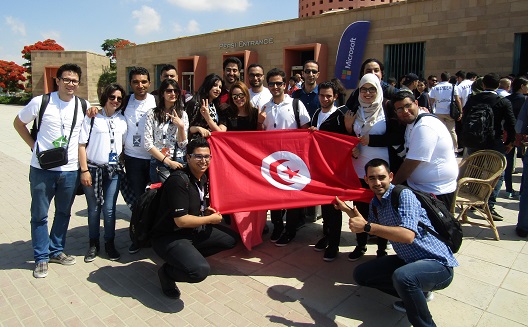 Two teams from Tunisia alongside one from Bahrain will represent MENA at the global final in Seattle. (Images via Eduard Cousin)

She just came out of the closing ceremony of the Microsoft Imagine Cup Pan-Arab finals on Sunday afternoon at the American University in Cairo, and her product did not win an award.

The scene is one of joy and despair; the winners are flooded by media and people taking pictures, beaming with their awards, while other participants find a place to sit by themselves, overthinking what has gone wrong, or quickly move towards the buses.

The dream, to represent the Arab world in the global final of the student technology challenge in Seattle in July, was big and for many is now over.

Baghdadi had designed a video game with an educational twist, featuring historical and archaeological sites in and around the Palestinian city Nablus, her hometown.

“There is nothing next,” she said, when asked about her future plans. She didn’t realise that earlier that day her words at a side event on women leadership in technology had motivated dozens of promising young women to pursue their dreams. Something perhaps worth more than an award. 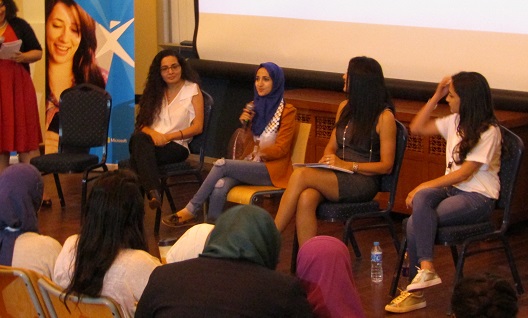 Malak Baghdadi speaks to the audience about pursuing her goals in technology.

The Pan-Arab final featured 38 teams of two to four high school or university students each - the winners of the national contests - from all over the Arab world, and held on May 27-29.

The teams were competing in three different categories, Innovation, World Citizenship and Games, for a first prize of $4000, second of $2500, and third prize of $1500.

Most Arab countries are represented, with the exception of war-torn Syria, Iraq, Yemen and Libya. Several teams from the Gulf countries featured other nationals: One UAE team was comprised of two Syrians and two Jordanians who lived in Dubai.

Tunisian team Night’s Watch won the World Citizenship category with their Smart Hand: a prosthetic hand for people who have lost a limb. The second and third place went to SmartInaf from Algeria and Vditory from Egypt respectively. 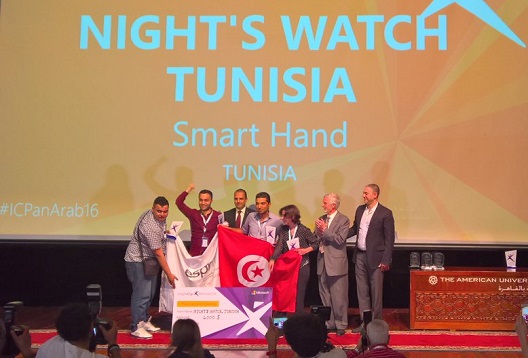 The Games winner was a horror game, Apollo-X, by Bahraini team Vanguards. It uses virtual reality and biotechnology to adapt the game to the player’s heartbeat and thereby forcing the gamer to control his or her emotions. The second place went to the Saudi Arabian team The Lost Methods and the third to Algeria’s Xerise.

The winner in the most prestigious category, Innovation, was the Tunisian team Basilisk with Protect Me. They designed a footpad to detect blood pressure deviations for diabetes patients. Second came team Warriors from Jordan with a smart printer, while Lebanese team Tutup, an app to connect students and tutors, came third.

Microsoft’s Imagine Cup came into being in 2003, to push students towards technical fields such as computer sciences, engineering and IT.

Imagine Cup cofounder and competition judge Amintas Neto told Wamda the motivation had changed as there was no longer as much of a shortage of students entering technology fields. Instead they focused on growing ecosystems: the more people working in technology, the larger Microsoft’s potential market.

Women in the spotlight

Throughout the event the importance of women’s participation and leadership in technology was regularly highlighted.

Three ‘women leadership’ awards are given alongside the category winners, but even the event itself highlighted the problem: only two out of the 16 judges were women, and all closing ceremony speakers except one were male.

This year saw women’s participation rates in the competition touch 23 percent. On a global scale it’s a low number, but considering the challenges female students face in the Arab region, it’s still promising. 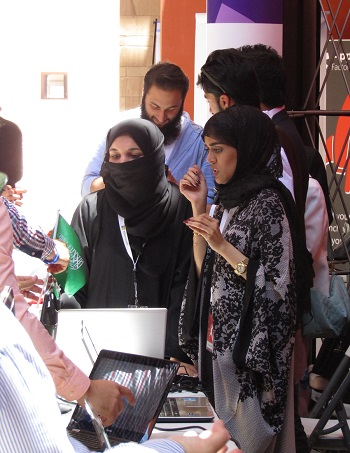 For instance, in the Middle East it’s not uncommon for girls to be restricted from travelling abroad without a companion. Hence, several women participants were accompanied by their fathers or mothers.

Wijdan Moussa and Raniyah Almalki (right, demonstrating their idea to the judges), from the Saudi Arabian team curriculum visualization team OOPVisual, are a case in point.

“Only a few days before the cup our fathers approved us going,” Moussa said.

The fathers accompanied their daughters throughout the event, proudly taking photos and videos during their presentations. Moussa said her father, a professor in computer science himself, encouraged her to take this path.

They voiced a common general feeling among the women at the finals: yes, there are obstacles in terms of societal stereotypes and travel restrictions, but “if a women wants to achieve something, she can and she will,” said Moussa.

For some women IT is a perfect way to combine a role as a mother and a career, allowing them to work from home with flexible hours.

Sarah Allali, from the Algerian team DzReflection that designed a smart mirror, dreamed of working part time as an IT developer while also having time to spend with a future family.

‘Tech is not a boy-thing’

When asked about the stereotype that technology is more a ‘guy-thing’ she fiercely replies: “Completely untrue, half of our college is girls.”

“We should get out of the idea it’s about girls or boys, it’s about the ideas they have,” she said. 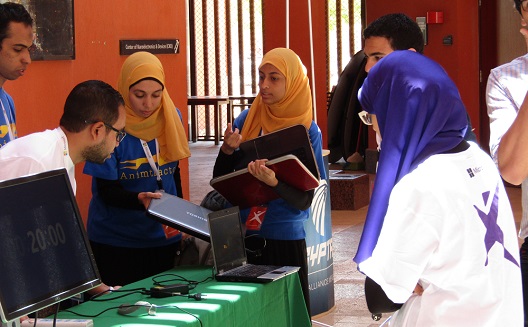 Nehal Ramadan, right, and her team prepare the demonstration of their product for the judges.

Her team of two women and two men designed a tool to automate animations by only using a video recording. When Alaa Adel, her teammate, suggested that girls generally tended to be more interested in social studies, “or cooking”, Nehal became agitated. “I don’t like this talk, we need to get out of this.”

She said she felt encouraged by her environment to pursue a path in technology, but eventually added this might not account for all girls in Egypt.

Microsoft further emphasized the importance of women in tech with a two hour session on women leadership in technology, dubbed #MakeWhatsNext.

Baghdadi had been chosen from the participants to sit on a panel to share inspirational success stories with the audience.

Amidst extensive arguments about ‘women empowerment’, ‘economic value’, and ‘driving innovation’, Baghdadi’s message to girls and women in the Arab region resonated the most with the audience: “Look at yourself as what you want to be, and keep on working to get there. No matter what that is.”