As the US government banned China’s Huawei from purchasing US goods and services last week, many were left wondering whether their Android-powered Huawei smartphones would still work.

The Asian telecoms giant has become the latest target in the US-China trade wars, which saw the company and 68 other entities placed on an export blacklist, the so-called “entity list”.

It is not the first time that Huawei has fallen foul of US policymakers, who accuse it of conducting espionage on behalf of the Chinese government. The ban goes beyond commercial protectionism and into the realm of politics where both superpowers are fighting for global economic domination.

Without a resolution, the move risks further fragmenting the internet and governments around the world including in the Middle East, will eventually have to pick a side.

While several countries close to the US have already banned Huawei from building its telecoms infrastructure like Australia, others are less reluctant given the company’s leading capabilities in 5G technology  - expected to be the main enabler of innovations like machine learning, artificial intelligence and internet of things. 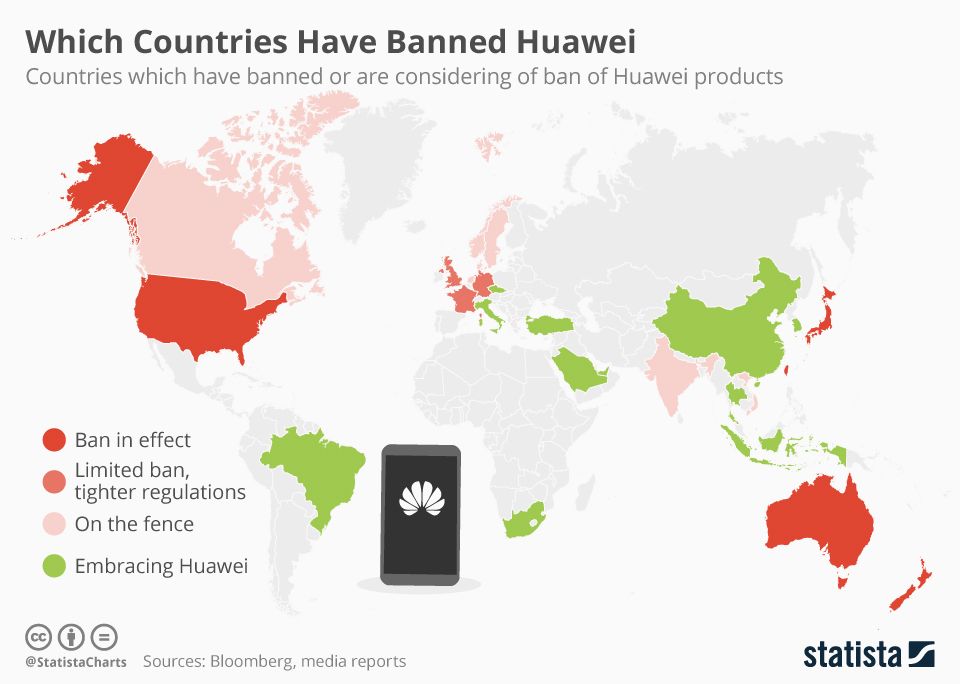 Huawei was the first Chinese company to go truly global after the government began to embrace capitalism. It expanded across the world and established a strong presence in the Middle East and Africa, where it enjoys the second highest smartphone share in the local and global market, just behind South Korea’s Samsung. The company has also been instrumental in rolling out the telecoms infrastructure of much of the region including in the UAE, Saudi Arabia and Bahrain.

So with this latest snubbing, where does that leave the Middle East in this new technological cold war that is beginning to unfold?

The Cold War of the last century between the US and the former Soviet Union focused on an arms race centred on nuclear prowess, later becoming a race to space.

Nowadays however, a new cold war has emerged, but this time it is between the US and China and one centred on technological innovation.

While the US was spending trillions of dollars fighting its wars in Afghanistan and Iraq, China was busy innovating and building up its manufacturing capabilities. Instead of producing “cheap Chinese goods”, it is now producing “cheaper” Chinese products that are good enough to compete on a global scale, with Huawei sitting at the forefront of technological innovation.

Over the past 10 years, Huawei has invested $45 billion in research and development (R&D), of which more than $13 billion was spent in 2017 alone. It is the world’s fifth largest spender on R&D, outspending Apple, Intel and GE and has ploughed $2 billion into 5G technology research.

Its P30 smartphone, its flagship phone launched this year and priced at around $700 offers specifications that enable it to compete with Apple’s iPhone and Samsung’s Galaxy phones. But whether consumers will risk investing in the handset now remains to be seen. Google, which develops the Android operating system (OS), confirmed that it will continue to offer its services for existing Huawei devices, but future models will no longer be supported.

Huawei’s chief executive of its consumer business, Yu Chengdong, stated that the company has already developed its own operating system which will be available by early 2020, should the US refuse to take it off the entity list. For its Chinese consumers, this is unlikely to be an issue since Google services are not available in the country, but for consumers in the Middle East, where Android and Apple are the dominant OS, this will matter. If Huawei develops its own OS and app store, developers will have another OS to cater to, and Huawei fans will need to decide whether to forego Google services like Gmail, Youtube and Google Search and instead opt for Chinese-made solutions.

But since more than half of Huawei’s revenues come from China, what the Middle East consumer decides is only likely to make a modest dent. What is more important however, is whether governments in the Middle East will continue to trust Huawei with their mobile telecoms infrastructure.

As the world’s principal energy supplier, the Middle East’s political stability and ideological preferences play a crucial role in the global economy. Given its strategic location and resource-rich lands, the region has throughout its history, been a theatre for global conflict with empires and superpowers attempting to either invade it or woo it for political, ideological and economic support.

Most recently, it has been China that has attempted to win over the Middle East and it has been succeeding. According to the Arab Investment Export Credit Guarantee Corporation, China is now the region’s biggest investor and holds almost a third of the foreign direct investment (FDI) stock in the Arab world.

Trade between China and the Middle East is expected to rise to $500 billion by 2020, up from more than $300 billion today according to US-based consultancy McKinsey & Co.

One catalyst for the growth in this partnership has been the Belt and Road Initiative (BRI) first outlined in 2013, which aims to build roads, ports, railways and other infrastructure of connectivity from China across to North Africa, a modern-day silk road with up to a $1 trillion of Chinese investment.

In February this year, Saudi Arabia agreed to include Mandarin in the curriculum at all stages of education from school to university following a meeting between Crown Prince Mohammed Bin Salman and a high-level Chinese delegation. The decision is intended to strengthen bilateral cooperation and increase opportunities for partnerships in the long-term.

China is banking on its historical ties to the region, re-imagining the old trade routes for the modern day and a return of an Eastern civilisation powered by the latest technologies. This, for many in the region, is a more attractive proposal even with the accusations of espionage, than pandering to the US, whose recent history in the Middle East has been left wanting.

But what many fail to realise is that technology is interdependent. No one superpower can win a technologically-driven economic or trade war without causing its own economy to suffer. Banning Huawei from buying US goods and services will negatively impact the US.

Of the $70 billion that Huawei spent last year buying components, about $11 billion went to US companies including Qualcomm and Intel.

It is worth noting that another Chinese telecoms player ZTE, was also placed on the entity list last year, but the ban was lifted within a few months after it paid a $1 billion fine and $400 million in escrow and replaced its board of directors and senior management.

It remains to be seen whether Huawei will suffer the same fate, but if the US remains steadfast in its decision, then governments around the world will be forced to re-evaluate their telecoms policies. At some point, the Middle East will have to choose the technology it wants to deploy for its future so that it doesn’t risk losing out on yet another industrial revolution. And it is a choice that will be driven by either cost or ideology.