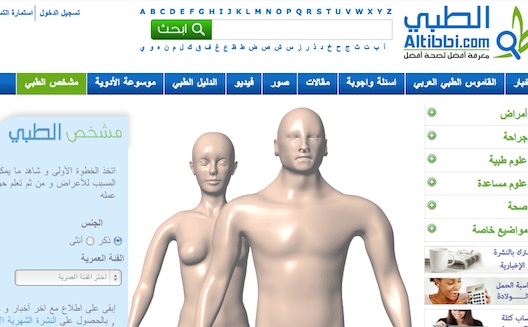 The Arab physician's network now allows any doctor to sign up an answer questions on AlTibbi, while giving users the ability to can "follow" doctors and view recent answers and responses in a news feed upon sign-in. Through this network, users can get opinions from verified physicians from around the region and communicate directly with them on the site.

It's a big step forward in terms of opening up the physician community on AlTibbi, says Amman-based founder and CEO Jalil Allabadi. "Before, several of these elements- patient's questions, doctor's posts, and patient feedback- were siloed on AlTibbi. Now they are completely connected, and doctors can open their networks to provide services to a broader community of patients."

The system is designed so that only doctors can vet each other's comments by clicking an "Agree" button; replies with the most "Agrees" rise to the top of the discussion. Patients can also now click a "Thank" button to thank doctors, and access them directly for follow-up, all through the automated site. With 100 physicians joining AlTibbi daily, it promises to become the largest medical-focused social network in the region.

As we reported in February, AlTibbi already answers 150-200 questions a day on its site, and has taken strides to build from an Arabic medical dictionary of 65,000 medical terms to a 1.2 million-page site that also boasts over 105 interactive education videos in Arabic.

But its biggest coup may be launching the first fully Arabic symptom checker, under the name "Mouchakhess AlTibbi" (مشخص الطبي). This now allows patients to quickly diagnose their symptoms through an automated series of questions, or browse related conditions, with the caveat that they should always seek out a doctor for confirmation rather than take an online diagnosis as final.

While symptom checkers are prolific on other sites, none have been released in Arabic thus far. The process was far from simple, says Allabadi. While AlTibbi considered buying a symptom-checker from established U.S.-based medical portals, the team realized that building one to suit the Arab World would involve far more than simply translating a set of terms into Arabic.

"Symptoms are related to cultures," Allabadi points out. "We wanted to target the top 100 conditions that people suffer from the most in our culture, not simply import another culture's conditions."

To accurately capture the region's ailments, AlTibbi used its own data to connect the 100 most frequent symptoms with 10,000 related conditions, working with doctors and programmers for 5 months to build a fully functional diagnosis tool. While several other startups in the region have pitched the idea of creating one, no one has built a diagnosis platform that's completely native. "Another startup founder recently asked me how much we paid for our platform, because that's the default assumption," Allabadi says. "I had to explain that we actually built it ourselves."

In future iterations, AlTibbi will add specializations for sexes and ages, and more specific and rarer conditions. For now, the platform continues to be a trailblazer. The site already has iOS and Android apps; next up, hopefully we will see the apps incorporating the symptom checker to boost on-the-go accessibility.