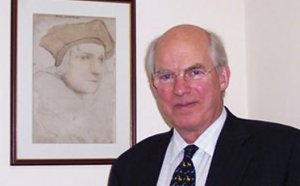 British Army Rt. Major General Tim Toyne Sewell not so secretly known as Big Tim to his subordinates at the Royal Military Academy Sandhurst, where he was Commandant in the 1990s was born to adventure, exploration and leadership. Aged four, with his father stationed in Egypt, he swam across the Suez Canal, and back. As Toyne Sewell explains, there was no good reason to stay on the other side.

To listen to Toyne Sewell is to receive an insight into the formative powers of education in military practice, international diplomacy and individual motivation. He currently runs the support team for British extreme swimmer, Lewis Pugh, the first man to complete a long swim at the North Pole and who last year set a record for the highest recorded swim. Pugh uses no wetsuit.

The venue was a heavily silted lake in the shadow of Mount Everest at a height of 17,400 ft, with a water temperature of 2 degrees centigrade (approx. 35 degrees Fahrenheit). Pugh's first attempt failed. The notorious Everest weather was closing fast. There was one more chance if Pugh, exhausted, demoralized, and suffering from altitude sickness, could be motivated to take it.

Toyne Sewell's advice: Don't fight the mountain. Less cryptically, try breaststroke instead of freestyle. Pugh did, and set the record.

Now the chairman of United World Colleges, Toyne Sewell was a panel member discussing exploration, adventure and leadership at the recent Festival of Thinkers event in Abu Dhabi, where he spoke with Arabic Knowledge@Wharton.

Arabic Knowledge@Wharton: Your student body at United World Colleges is about 10,000 students from 120 different countries. What is their favorite study topic?

Tim Toyne Sewell: The mission of UWC is, 'to create a more sustainable and peaceful world,' and therefore the students are fascinated by conflict resolution. They come from a wide variety of backgrounds. When Iraq, Afghanistan or the Arab Spring hits the headlines, they will all have a debate about it. It's because so many of them have lived through such events and because they're mini-ambassadors for their countries there are usually only one or two from each country at each college they have a natural curiosity about world affairs.

So they have lived it. They understand it. We had a Yemeni boy at our school in Canada, summoned home to deal with a tribal dispute where hostages had been taken. He had to settle it. He was 18-years-old. But that means a child from Middle America, a fellow student and his dorm mate, will have a far greater understanding of the complexities of tribal responsibilities because they know him and have studied with him.

Arabic Knowledge@Wharton: What do students of that age know of leadership?

Toyne Sewell: They're not conscious as to whether they can lead or not, but the fact that they have come forward to take an opportunity like this would indicate a potential for leadership: they have the spark and our task is to blow that into a flame. My own latent leadership was nurtured at Sandhurst, the motto of which is, 'Serve to Lead.' You cannot lead unless the team you are leading, in any sphere of life, knows that you care about them and will put their needs before your own. The same applies in UWC.