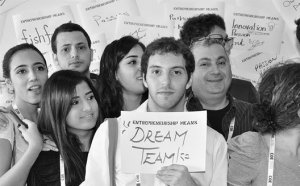 Gathered together around a wide table, the group of entrepreneurs in Dubai for this year's MIT Enterprise Forum Arab Business Plan Competition represented a key constituency of the Arab Spring generation: Young, educated, and reform-minded, seeking to create their own opportunities.

Among them was Manar Moursi, the principal behind Studio Meem, which repurposes ordinary Egyptian objects into eco-friendly furniture. Being around like-minded people energized her. "It's easy to access this support network," she said.

Her fellow entrepreneur, Hind Hobeika, was committed enough to pursue her idea that she left a good position with a prestigious company, a move that displeased her parents. "It is tough for them to understand why we are quitting jobs with multinationals," she said.

The others nodded with knowing approval. Challenging the status quo is just one aspect of pursuing their goals. "There is a feeling that you can do it, that you have share of the responsibility," said Shadi Tabbara, operations manager for brate!, a social network and search engine for regional businesses. "It's now in our hands, and we can't blame anyone now."

The winner of the competition would be Hobeika's Butterfleye, which has engineered a prototype of swimming goggle that monitors performance, including heart rate. The company has 15 Olympic swimmers from the U.S. and New Zealand testing the product at this year's summer games in London.

Ambitious and talented, the next generation of Arab entrepreneurs is readily seeking out opportunities to develop and grow, testing ideas in venues such as MIT Enterprise Forum's competition. Yet they acknowledge their efforts happen within a social sphere in disarray, and that traditional interests still dictate most of business and politics. Dissatisfied by the stalled promise of the Arab Spring, they say that entrepreneurship in the Middle East can yield truly lasting and beneficial change for the region.

"I think this is like a revolution, a refreshing of ideas and tastes, people are open to new ideas," Moursi said. "It's the power of spreading ideas."

The events surrounding Egypt's elections and the civil violence in Syria were not far from any discussion. Continuing tumult in the region post-Arab Spring has had an undeniable effect on the plans and efforts of young entrepreneurs.

But for the finalists, this competition now in its fourth year, while Wharton held its first innovation tournament earlier this year and other regional tournaments provide a space to focus on building skills and refining ideas. "The good thing is we've been exposed to the entire region," said Sherif Hosny, CEO of Schaduf, which sells micro rooftop farms to low income Egyptians. "You learn a lot about what's going on. People are looking for new ideas."

Hosny admitted the eight month-long competition was grueling. Yet it had provided him not only with ways to better himself as an entrepreneur, but also pushed him to evolve his business idea. "The feedback we've gotten here had us change our concept," he said. "We've had to think bigger."

Some entrepreneurs at the competition have been dealing with uncertainty long before the Arab Spring's revolutions. Being a tech startup based in Palestine has meant overcoming a number of logistical issues, explained Emad Ammouri, general manager for Ibtaker, which builds educational kits for Arab students.

Ammouri enjoyed being at the competition partly because of the simple freedoms he enjoyed in the United Arab Emirates, such as being able to drive wherever he wanted, without worrying about checkpoints. "It's not easy, but there's something to human nature and challenges," Ammouri said. "Call it survival, but we've adapted to hardships."

Politics may be one reason why more successful Arab émigrés haven't returned to the region, but supporting emerging entrepreneurs is a way to engage, said Ossama Hassanein, chairman ofTechwadi, an organization founded four years ago to link up Arabs working in the tech economy. "This is the best time for entrepreneurship in the Middle East," he said.

Hassanein was in attendance at the competition final, and took time to meet all the competitors, offering advice, and later announcing he would be investing in some startups as well. "Competitions are a dime a dozen," he said. "How about judges finance some of the winners?"

The Silicon Valley veteran was critical of some regional efforts to fund entrepreneurship that focused on supporting only nationals of a particular country. "By that very definition they are limiting their potential," he said.

He noted that before coming to Dubai, he was at a conference in San Francisco and described some of the business plans that were finalists in the MIT competition. There was surprise that advanced entrepreneurship was being done in the Middle East, he noted. "The level of sophistication, the clarity of presentations, and depth of analysis in these plans are quite good," he said.

Hassanein added that there needed to be a bridge between Silicon Valley and the Middle East. But future opportunities for young Arab entrepreneurs would be better in the Middle East, he said. For those with a dream to make it to Silicon Valley, he suggested it be a place to learn, rather than to settle. "Whoever wants to imbibe the culture there, come, and go back," he said. "Come not to start, but to accelerate."

The competitors at the finals were doubtful, though, that successful Arabs overseas would return to the region to help. A better situation, they said, would be if new leadership emanated from the region instead.

"It's not that outsiders don't want to help, it's because they don't believe they can succeed," said Abdulkader Lamaa, CEO of Vira, a concept to use artificial intelligence to organize social network relationships. "They are in San Francisco, they can't fix Lebanon."

Lamaa and his fellow competitors said that for regional entrepreneurship to continue to grow, some old habits in the region had to end, such as investor demands for high amounts of equity in startups, and the lending practices of banks that make it nearly impossible for young entrepreneurs to get funding.

Even venture capitalists need to be more supportive, instead of looking for ideas that copied proven ideas in other markets, Lamaa noted. "We have the most risk-averse VCs in the world," he said.

At the table of aspiring entrepreneurs, there was agreement on another point that despite their various backgrounds, the discussion was one afforded out of privilege. They still belonged to an upper echelon of Arab society, compared to a vast majority of citizens in the region.

At odds with traditional expectations and definitions of success because of entrepreneurship, but out of place among common citizenry