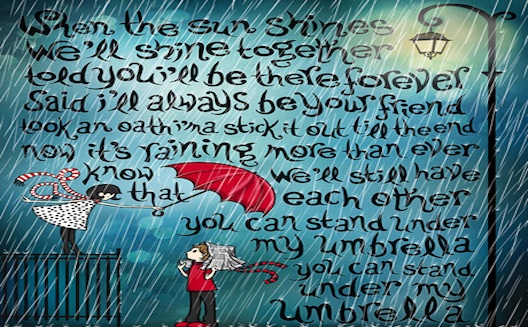 When Lebanese entrepreneur Nour Tohme started posting musical illustrations of songs for fun on her blog, she had no idea that she was taking her first steps as an entrepreneur. Two years later as the founder of Draw Me a Song, she's fully versed in legal jargon, having hammered out agreements with record companies; now her designs are set to go global when her website launches later this month.

“It started for fun,” 24-year-old Nour reiterates as she shifts in her seat. “It was just an artistic project that I was doing on the side. I was positing it on my blog, and people responded well, asking me if they could buy the designs, and requesting specific songs that they wanted me to illustrate. “

The buzz “went a bit viral,” she says, so when Tohme was tasked with creating a company during her master’s in France, she chose to start Draw Me a Song.  She drafted a business plan and marketing plan, and created a logo and website. Right after graduating last year she applied for the Deutsche Bank Creative Award, organised by Bader, and won. The award and cash prize of 10,000 Euros that she received turned out to be a “turning point” for the company. “Before, I was purely a designer and illustrator, but through the award I received funding, and then had the Bader team behind me and supporting me.” This improved the project a lot overall, she says, and she took the step to rs

The website, which is about to launch in the next few weeks, will offer posters in various sizes, with an A1 size starting at $30. The strength of her brand is the universality of certain musical compositions. “Music itself is global,” she says, adding that she picks songs which have global appeal, generating affinity in many cultures. Her first poster was Imagine by John Lennon, and more recent creations have used hits by Rihanna (Umbrella) and Amy Winehouse (Rehab). She has also ventured into Arabic music and is hoping to render French and Spanish songs in the future.

Appealing to a global customer base, however, brings its own set of challenges, which she has yet to address. Asked how she will deal with the cost of shipping and taxes, she says that the French post will handle this.

Later, she would love to sell at Virgin and other big music stores in the region and Europe. “But I haven’t gone into that yet,” she says, nervously laughing when asked when we can be expecting this expansion. For now, she has organized three exhibitions to showcase her products, and you can currently snap up her designs at Afkart, in Downtown Beirut, until the 11th of July.

Earlier this year, Tohme was among the 50 semi-finalists for the MIT Arab Business Plan Competition, where she benefitted from working to perfect her elevator pitch, she says.  When asked to repeat it, she summarises Draw me a Song as a way to carry your favourite song around, or have it on your wall, calling the company a “conceptual brand that visually translates songs,” (legally). According to the companies who provide the rights (EMI, Sony and others), she has no legal competition.

While Tohme has taken pains to be legal, calling the images “a new marketing tool for the music industry,” she faces the same issues that the entire industry faces: plagiarism. A friend in Jordan sent her a picture of a third party T-shirt printed with her design for Imagine. When asked where the merchandise was from, the vendor said “we don’t know, we got it from China.” “My design is being mass produced in China and we have no idea how to stop it,” Tohme recalled, aghast; it could threaten her future plans to produce T-shirts, notebooks, bags and mugs.

Legal issues are clearly the most difficult aspect of the business. Despite taking a crash course in copyrights, Tohme is still coming to terms with all of the legal requirements of creating art derived from existing art. “The fact that I depend on other people legally and I have to get approval before I can use a song is my biggest obstacle,” she says. “Now that I've signed contracts with the major publishing companies, I can get clearance in a day, but, before, it took months,” she remembers. “I am becoming a lawyer along the way.”

For now, she's also the creative director and illustrator and a one-woman show. She is currently looking to hire a new illustrator to work with her, and looking for funding to support hiring; with the rights to 60 songs lined up, adding staff is a prerequisite for growth.

It can be hard, but, apart from being her own boss, being an entrepreneur has the added advantage getting her work recognized. “In my field, it takes a lot of time to get recognised for your own work rather than other people’s work at a design company. As an entrepreneur, you get more recognition and satisfaction,” she says.

“Really big artists and song writers are seeing my work” she beams in disbelief. “It’s stressful, but I had no idea it would go that far.”