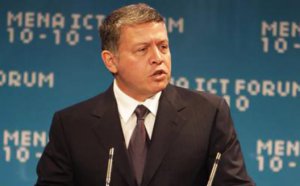 Jordan has managed to avoid the violence and political upheaval its neighboring countries have experienced with the Arab Spring revolutions. Much of that stability is owed to the rule of King Abdullah II, who still enjoys popular support, but has nudged a slow, steady reform course.

Abdullah has also been a strong proponent for fostering a high tech entrepreneurship culture in the country. It is a policy that has produced dividends, particularly in the information and communications technology (ICT) industry. In just a decade, according to Jordan-based Information and Communications Technology Association (intaj), the ICT sector has come to represent 14% of the country's GDP.

The country's industry produced a watershed success for the region Yahoo's US$85 million acquisition of Maktoob, an Arabic email service and portal, in 2009. Jordan estimates that over 50% of its startups are now in the ICT field, including telecom, IT, mobile online businesses, and game development. The industry has also attracted foreign investment roughly US$15 million in foreign direct investment in 2010, according to intaj.

Despite these achievements, ICT entrepreneurs in Jordan face some of the same hurdles for tech startups across the region. According to a recent study of Jordan's entrepreneurship ecosystem by Fulbright Scholar Jamil Wyne, the country has managed to quickly develop a solid tech infrastructure, but the three main challenges for growth its entrepreneurs contend with include finding the right talent, knowing how to market products, and accessing angel investors.

Wyne notes that the solutions to these issues begin with getting a wider range of Jordanians involved in tech entrepreneurship, and fostering greater industry collaboration. "Finding ways to bring both young and old entrepreneurs into the ecosystem, attracting more female entrepreneurs and identifying mechanisms for fusing ICT with other industries are top priorities," he writes.

As with the rest of the region, Jordan's young entrepreneurs say getting that initial financial backing for their companies remains the biggest challenge, partly because it is tough to access angel entrepreneurs, a problem their counterparts in Silicon Valley do not face.

Seeking out loans from banks is not an option for many startups since they do not have any physical assets, a key requirement to obtaining loans in Jordan. The country's banks have made it easier for start-ups to open up accounts. Five years ago, the minimum was 30,000 Jordanian Dinars (JD), and one had to deposit 50% initially. Now, an entrepreneur only needs a minimum of one JD to start a business. However, Jordanian law stipulates that an entrepreneur who loses 50% of capital in the first year of business will receive a governmental warning, and if the losses are more than 75%, then the government has the right to shut down the business. Though an extreme example, buying a pen could take away 75% of the money in the bank if there is only one dinar in an account. As a result, there still needs to be some changes in the regulations to accommodate the new minimum.

An additional regulatory issue is that a business with less than five employees cannot register for social security. Along those lines, a startup with no physical premises has issues obtaining business essentials, such as an Internet line, a phone number, and the appropriate business license. This is a zoning issue, and many startups in incubators, for example, have no physical premises or assets other than their computers. Jordan just recently passed an e-commerce law, but it is still not in effect.

Wyne's study looked at 105 entrepreneurs, and just 25 of them reported receiving angel investments. According to intaj CEO Abed Shamlawi, more angel investors are becoming receptive to start-ups. One of the leading institutions in this front is Oasis500, a seed and early investment stage company. What is unique about the Jordan-based firm is that it trains companies from the ground up, and teaches investors in the region about the benefits of investing in early stage companies.

To date, in the first 18 months of operation, Oasis500 has trained over 620 entrepreneurs in their training boot camps, invested in over 52 startup companies, and entered them into an acceleration and incubation program. But Wyne points out demand for funding is great; Oasis500 receives up to 1,000 applicants each quarter. "Even if entrepreneurs can get on the radar of active business angels, there might not be sufficient capacity on the funding side to satisfy the ecosystem's current needs," he writes.

"My staff and I had to review at least 400 CVs in order to find two programmers," Jalil Allabadi, managing partner of Altibbi, an Arabic medical portal, explained to Wyne. "Many of the ones we reviewed were simply unqualified, and even the ones that we eventually hired had no experience and required significant training."

Another aspect of the human resource issue is a language barrier. While it is possible to do business in Arabic at a small-scale, local level, it becomes tougher to do so once the company because regional or international, especially in the ICT sector. The language of the Internet is predominantly English, and communication with third parties outside Jordan is mostly done in English.

There is the evergreen issue of culture. Repeatedly, regional entrepreneurs claim the culture is very pessimistic about startups, and it is an uphill battle for young people in a country with little disposable income. But there is some change: According to Wyne's report, over 90% of respondents said the opportunity to innovate was an important reason for launching a startup. If there was a chance to leave the startup to work less, but for someone else, almost 95% said they would turn it down; while 81% said they would turn down a higher-paying job somewhere else.

Wyne's report also found that among the surveyed entrepreneurs, few said their university education was a significant factor in their decision to become an entrepreneur. "If universities are not discussing entrepreneurship, celebrating entrepreneurs and exposing students to even the basic competencies associated with the entrepreneurship ecosystem, students could be less interested in working for a startup, let alone creating one themselves," his report notes.

Many find fault with the educational system. Jordan graduates 5,000 ICT graduates from universities per year, yet this still does not provide the kind of candidates required for most businesses. At the moment, there is a big gap between the private sector and academia. Shamlawi says this could be because academia is having trouble keeping up with the private sector due to outdated technology or outdated teaching programs.

In addition, Ala Suleiman, CEO and Co-founder of Masmoo3, an Arabic digital audio books production and publishing house, claims that the methods of teaching are also outdated, and that many universities do not teach about entrepreneurship. "At university in Jordan, they teach you how to become an employee," he said. Unlike Western universities, where building leadership is a key outcome of the curriculum, many of Jordan's universities seem to be teaching students how to be employed rather than to pursue risk or ambition.