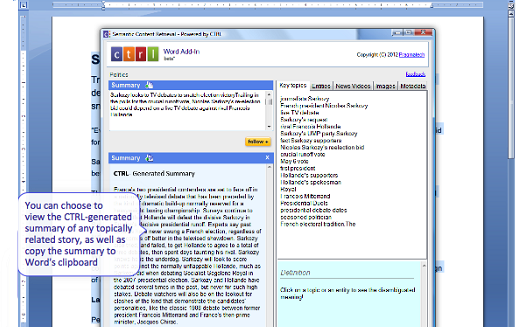 Creating a report, article, or any other type of document is set to become a lot easier with CTRL, a new semantic tool being introduced as an add-in for Microsoft Word and the web by a group of Lebanese developers.

After gaining experience in the Gulf, Canada, the U.S., and Europe, the group finally came back to their native Lebanon to start Pragmatech; a research and development company led by Dr. Walid Saba and comprised of several of his former students.

CTRL, pronounced "control," “is a semantic search engine which is able to discern what a document is about, summarise it and subsequently link to related content and video,” says Saba.

The engine can really distinguish between two types of jaguars – the animal and the car,” states Ghaly. “Or even the company,” adds Saba.

Semantic search isn’t new; competitors like Cognition have been at it for years. Saba explains that what gives his product the edge is that its analysis goes further than the competition. “We go two levels of analysis further; we give meaning to topics and complex meanings, and then analyse the topics to understand key topics, which are semantic objects.”

“To give you an example, climate change and global warming, two completely diffferent sets of words but these topics are linked, nobody can deal with this relation except us.” This complexity allows CTRL to be multilingual; Arabic, English, French, Russian are all enabled on the app.

For now, the technology has been developed as a Microsoft Word Add-In that helps writers identify information relevant to their work including the names of people, places, companies and products. For example, an article about the Syrian crisis in the add-in’s demo allows you to see that Lavrov is Russia’ s foreign minister, information is pulled from Wikipedia.

In addition to linking to relevant articles online, the database now includes several news sites, academic journals and Wikipedia. CTRL also links to videos and images, all under creative commons license, to insert freely into your document. You can then subscribe to receive daily or weekly updates on relevant topics in your inbox.

This differentiates the product from Kngine, a semantic search engine coming out ot Egypt, which launched an iPhone app in May and is set to launch an iPad app any day now. While the two may be neck and neck in the semantic search space, they appear to have carved out different niches, with CTRL going for a Word App-in focused on supplementing documents with information, while Kngine is designed to answer users' questions on the go with more relevant and nuanced information than a typical search engine can muster.

For some reason CTRL's ability to link to videos, in a manner not based merely on keywords, is being hailed as a breakthrough. Everybody I talked to about the idea had a positive response, many asking where they could get it. Indeed, the makers seem to know they have potential gold in their hands, and are careful not to launch before their servers can handle the anticipated demand that will follow the initially free release of the product.

Although the team tested a version at the SemTech Conference in California last year, the release date of CTRL is still undecided. Touma explains that necessary material such as routers are still waiting to clear customs and the amount of approval required for rudimentary imports is a huge hurdle. Saba adds that at any time the power might go and they may not be able to provide for the thousands of users which would want it. There are also issues of security and accessibility to our severs.

CTRL’s Microsoft Word add-in is just the first of several planned products. Soon to launch is a plug-in for browsers which will allow for a similar type of intuitive search, possibly pitting it more directly against Kngine. The company has partnered with Lebanese newspapre The Daily Star, which has already begun testing the browser tool on its site.  A quick scan through recent articles proves it works; CTRL produces coherent summaries of the articles.

As for the future, Saba says that semantic advertising is “the holy grail of advertising,” and the team is developing a program which will allow advertisers to target content about specific topics, rather than the keyword-related adds which popup today. For that, however, the team will need to expand and hire more developers. “What is unique about this team is that we have 5 people who can code... This team can do everything." He has learned more from his former students than they have from him, he says.

Concerning the project’s financials, all that the team will say is that they are “very happy” with UDC currently. They definitely feel like entrepreneurs rather than employees; “we are very passionate about this work, we rarely leave the office,” says Touma. “Just see it like this, UDC is our VC,” adds Saba. Once the web search launches, we'll all be able to test it and see whether semantic search's claims of revolution come true.