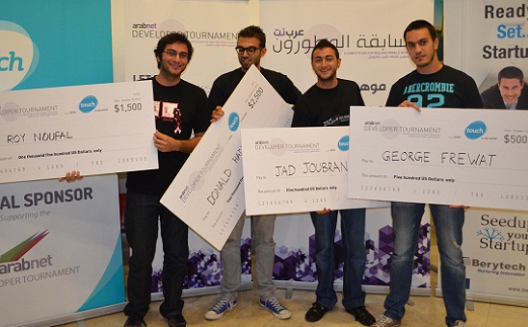 On Saturday, ArabNet brought over 40 young Lebanese developers together in Beirut to compete in an intense coding tournament. The winners will move on to the regional competition in March 2013.

The first three rounds of the ArabNet Developer Tournament tested the contestants’ speed, sophistication, and creativity, narrowing the field down to 15 talented competitors. The fourth and final round tested the overall performance of each developer and their ability to find and implement creative solutions to complex coding challenges.

"Developers were the center of attention for the first time at a competition like this," explains Beshr Kayali, Developer Tournament Lead at ArabNet. "For some it was an enthusiastic challenge, for the rest it was a joyful learning experience. What set developers apart is not just experience, but passion as well, the thing that kept them coding for 12 hours non-stop without giving up."

The top four in Lebanon will go on to compete against the four winners in each of the other competing countries which will take place from now until January 2013:

At the ArabNet Digital Summit in March 2013, the country champions will face off against each other for the title of “Best Developer in the Arab World.”

These four each have an impressive background in development; 1st place winner Haddad has a particularly innovative website through which he is “breaking pixels into bytes.”

With Lebanon’s top developers finalized, the next stop for the tournament is Amman, where Jordanian developers will also compete to see who makes it to the next round in March.

Stay tuned to see which developers come out on top in each country and who is ultimately crowned “Best Developer in the Arab World.”