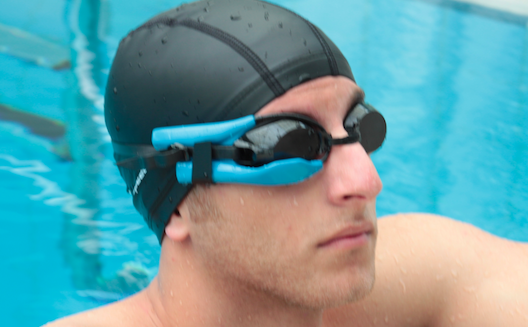 Swimmers, says Lebanese entrepreneur Hind Hobeika, have it tough when it comes to technology. To measure their performance, they’ve been fumbling along with devices created for running. “The motion of the arms and the head makes it impossible for swimmers to read values off a watch throughout the workout, and adds friction to the motion of the swimmer,” she points out.

Hobeika, a competitive swimmer turned hardware engineer, has set out to transform the experience, crafting her dream performance tracker: Instabeat, a device that seamlessly tracks a swimmer’s heart rate, caloric burn, and number of laps. Her first prototype, which is designed to easily fit any pair of swimming goggles, is now available via an IndieGoGo campaign that launched last week.

After regularly testing the model (formerly called Butterfleye) on five professional swimmers, Hobeika and her team of five engineers were able to hone the design, from an initial model that projected screens onto both goggles, to a sleek model that alerts the swimmer with LED lights in the corner of their right goggle as to whether they are performing in fat burning (blue), mid-range (green), or maximum (red) zones.

A new waterproof USB design that will allow the device to upload stored data, and the team has optimized the device’s ability to read a swimmer’s pulse from the temporal artery, using a light sensor. “Between individuals, the artery’s location varies by less than 5mm, which is covered by the light sensor’s 30 degree angle of detection,” explains Hobeika, who holds a degree in mechanical engineering from the American University in Beirut.

The current prototype is now selling like hotcakes. 100 of the “Limited Edition” prototypes offered for $99 have already been claimed; those who want one now will have to pay $139. Since it went live on Thursday, Instabeat has reached almost $11,500 of its $35,000 goal (this number includes donations made via a separate payment gateway for those in Lebanon).

The team is “freaking out” that the campaign is doing so well, she admits. But, never one to believe the hype, she’s immediately focusing on the next steps. “I'm trying to focus on the campaign so they can go hard core on the product right now. This is a good milestone, but it shouldn't distract us from the real work,” she says cheerily.

Instabeat’s launch is a moment the Middle East has been waiting for; ever since Hobeika won third place in the Stars of Science competition in 2010 and first in the MIT Arab Business Plan Competition last year, she been one of the most promising entrepreneurs to watch in the Middle East, period.

Only 24, Hobeika can often be seen with a bright smile on her face, making a punishing work ethic seem effortless. On her personal website, she writes, “Up until 2010, my life had been pretty standard. I was always first in school, knew I wanted to become an engineer, and dreamt about working in a supermultinational, leading the ambitious corporate life.”  Her dedication to her startup is directly informed by her love of exercise and self-quantification. “My day usually starts with an hour of running followed by 3km of swimming,” she notes.

Her work ethic has helped her persevere in the tough environment of Lebanon, where “the resources for prototyping are non-existent,” she says.

For instance, simply using a 3D printer has proved difficult. Access to a local high end 3D printer would have allowed the team to print new designs in 20 minutes (local co-working space Lamba Labs has one, but it’s too basic- “we’re far beyond simply testing the shape," says Hobeika). Instead, by ordering designs printed in Europe and shipped to Beirut, the Instabeat team was able to iterate on a time scale of 10 days.

And yet, less than a year and a half after the company’s official launch in December 2011, they've produced a prototype quickly, funded by $100,000 in seed investment from local incubator Berytech and the $50,000 she won from MIT.

Now, Hobeika says, “The easy part is done. The much harder part is coming.” The team is ironing out their manufacturing process, planning to use facilities in Korea and China to manufacture the plastics, and companies in Ireland and France to build the electronics. Assembly might take place in Asia, she says.

Of the lucky few who manage to get their hands on this first prototype, 50 will be asked to become testers, swimming with it daily and keeping a personal log. “It’s an intensive logging activity, but they will be compensated,” she explains.

The team is already at work on the next prototype, which will offer wireless battery charging, bluetooth syncing, and more sophisticated analytics, with a dashboard where coaches can monitor their swimmers in real time. If Hobeika gets her wish, the device will enable millions of swimmers to better understand the sport they love.

Watch more in her TED Talk below: