In Morocco, the geek and startup social life doesn’t stop during Ramadan. Au contraire! Two major events take place during the holy month: the GeekFtour and the Ftour 2.0, both of which play upon the Moroccan word for iftar. When these two events launched, respectively in 2010 and in 2011, they were just simple meetings in cafés among members of Weboma, the Moroccan web community. Now, with events built around sharing and friendliness, the Geek Ftour and the Ftour 2.0 have together managed to gather 500 web enthusiasts.

Ftour 2.0, an iftar for web professionals

Organized on July 17, in Rabat, by Social Media Club, Ftour 2.0 is known for its simplicity. This intimate event gathered around a hundred people, mostly web professionals. Before the ftour, participants took part in various team building workshops, in calligraphy, music and tennis, to name a few. The much-anticipated ftour then lead the group to share its professional and personal topics, followed by a musical show.

GeekFtour, where the geeks of tomorrow have fun 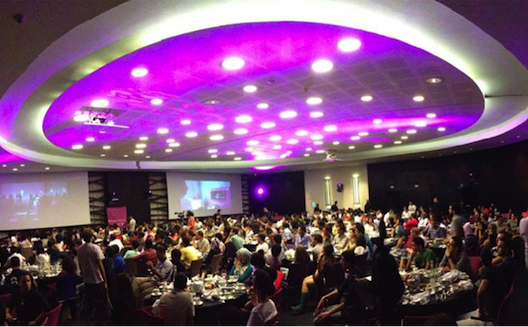 In a different city, with a different audience and different atmosphere, GeekFtour took place on July 27, in Casablanca. Organized by Evento, a student-led startup, the event drew in a younger crowd of around 400- including many students- to Casablanca.

Prior to the ftour, there was no calligraphy, but there was a gaming contest; after the ftour, the team hosted a series of “Ignite” talks, which were 5 minute-long talks of only 20 slides. The 10 talks covered various topics from Bitcoin to how to make Morocco a better place, including a debate on which language Moroccan geeks should use- French or Arabic? In between the talks, Evento gave the stage to the participants for a talent show.

This year, for the first time, GeekFtour also made its debut in Algeria. On July 20, GeekFtour Algérie gathered a crowd of around 200 in Alger. How big will it be next year?

This Saturday, the Weboma community will also see another first: a web-related ftour organized outside of the Casablanca-Rabat zone. Webomarrakesh ftour in Marrakech will gather the web community, developers, designers, students and geeks for one of the last iftars of the season.

Each of these events have revealed the community's need to share, as web and mobile developers, marketers, journalists, young CEOs, and students have all come together to share their desire to effect change and continue building the Moroccan web.

To get there, this community needs not only to share, but also to learn from each other and implement some structure; however, GeekFtour and Ftour 2.0 are a step in the right direction.

The vendredit.com series that will kick off tomorrow, fostering values of sharing, giving, learning and progressing, is another event pushing the ecosystem forward.

It’s those kind of events that will enable Moroccans go from copying trends to creating new trends that are catered to the Moroccan market.