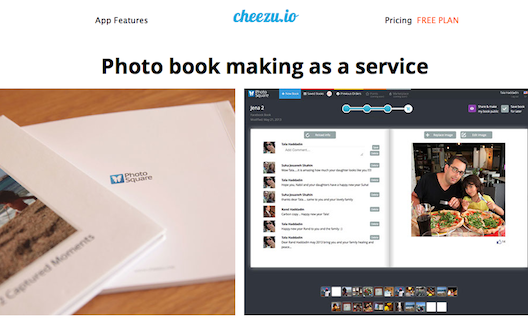 There’s got to be a story behind a company by the name of Cheezu. “I was watching a Japanese movie,” says Tala Haddadin, Cheezu’s Jordanian-American Production Manager, “and instead of saying ‘cheese’ while having their photographs taken, the characters said ‘cheezu.’” The catchy saying clicked with Haddadin; it’s now the name of her business, which has up until now made custom photo books with either hard copy photographs, or those selected by users from their social media accounts.

But Cheezu is expanding. Haddadin and her two-person team are currently searching for investors to support Cheezu's new B2B interface, which allows companies to use Cheezu capabilities to create branded photo albums for their clients. Through this, Cheezu will offer corporate clients new revenue streams as well as new advertising mediums.

Incorporated in Amman in 2011 on the strength of a $30,000 USD investment from Oasis500, the Jordanian investment group and startup accelerator, Haddadin launched Cheezu initially to create photo books from people’s hard copy photographs. Over the past two years, the former M&C Saatchi art director has made over 500 books, priced between 70 and 130 JDs ($98 – $183 USD), supporting herself and her company. “It’s a very personal interaction,” she says. “I’ve seen every intimate aspect of people’s lives; we’re passionate about preserving people’s memories.”

Late last year, PhotoSquare began to pivot to online, creating photo albums specifically for social media users, allowing them to choose photos from their Facebook, Twitter, or Instagram feeds and printing them with comments, likes, and all other social interaction. According to Haddadin, Cheezu lets users “print their social lives and put it inside a book.” Book delivery is guaranteed anywhere in the MENA within seven working days, no small feat given the myriad challenges of delivery service in this region. But Haddadin brushes off my doubts, saying “It’s not hard to guarantee seven days; we have excellent customer service.”

Expanding her business beyond the Jordanian market, Haddadin hopes to retain the passion for the personal she cultivated while serving the Jordanian market in person. Last year, Haddadin and her team developed a white label business-to-business (B2B) interface, allowing businesses to get their own web domains through which to connect to the Cheezu book making service, located on secure cloud servers. Haddadin things that brands, especially those involved in life passages like weddings, births, etc., will jump at the chance to let Cheezu create photo albums for their customers while selling them tiaras, or pacifiers, or whatever.

“Brands want to move away from standard advertising,” Haddadin says. “They want to become part of what people create and share, they want to create content. This enables brands to insert themselves into people’s life stories.”

Haddadin’s team will continue to make custom photo books for customers, having re-branded this prong of her business under the name PhotoSquare. (Offline services still represent the majority of their sales, Haddadin says). She's also looking to expand her offline business. The Gulf market, she says, is “a vertical we really want to run with.” It was with eyes on the wealthy and tech-savvy Gulf markets that Cheezu developed “the first easy-to-use photo making software in Arabic.” Cheezu is also in talks with The Bakery incubator in London's Tech City district about the logistics of tackling the UK market as well.

It’s this Arabic-language software, and the social media fluency of the photo books that differentiates Cheezu from Apple’s iPhoto and other photo album creation services. But most importantly, it’s the service Cheezu provides to businesses looking to get into the lives of their customers in a new way.

Next year, Haddadin has two major goals. First, to sign at least one big brand up for Cheezu’s B2B white label service; Cheezu is currently speaking with Dannon (whose customers would presumably be interested in baby photo albums) and Match.com (which would appeal to couples who met via the site looking to memorialize their relationship).

Second, Cheezu needs investment. Having subsisted since 2011 on the $30,000 USD from Oasis 500 and the profits of its (mostly) offline sales, Cheezu is now “aggressively seeking funding; we’re looking for the right angels to add value and help take the product to market,” says Haddadin. She says that Oasis500 has helped with finding investors, especially in the last three months with the help of new CEO Yousef Hamidaddin; he has “helped get new Gulf investors, opening up markets in Saudi” and elsewhere. From the next round of funding, Cheezu is seeking $300,000 USD, which it would use to “hire core developers, market B2C in the MENA region (especially the Gulf), and further develop our white label solution.”

Whether Cheezu can remain personal when dealing with customers indirectly through massive corporations is a question that may be answered by the amount of investment capital – and success – this year brings the site.