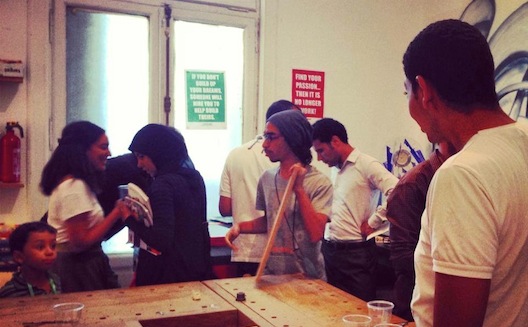 Since it launched this past November, co-working space icecairo is building a reputation for being one of the few places that Egypt’s entrepreneurs can go to build products and innovate sustainable concepts. Under the guidance of Mohammed Radwan, a self-described “vagabond” industrial engineer, and his co-founder Adam Molineux-Berry, the long-time director of Cairo’s Design Emporium, the space hopes to "solve environmental and social challenges” despite the financial challenges of being an independent organization in today’s Egypt.

I've known Radwan for five years, but it never seemed obvious that he’d make the leap from highly-regarded local activist to entrepreneur, although he has all of the qualities of both: he’s intensely driven, takes risks, has passion, and wants to make an impact. His first crack at his own business was a t-shirt company with revolutionary slogans and graffiti-inspired designs that he sells mostly to friends.

Now, when he’s not attending protests–or boycotting them for ideological differences–he’s known for his social media savvy, which he uses for Nawaya, a group that promotes sustainable agriculture and social justice for Egypt’s rural poor.

In 2012, when Radwan met Molineux-Berry through Nawaya, the two leaders saw an opportunity to take their activism into the business sphere. Molineux-Berry had been in discussions with the founders of iceaddis, who were interested in launching a similar project in Cairo. When its main sponsor, GIZ, took an interest, the two founders launched the space in November, gaining support from the Egyptian government to build a fabrication laboratory, or “fablab,” stocked with industrial machines on loan.

By hosting networking and training events- on topics like photovoltaic installation and parametric design- right in the heart of downtown Cairo, across from the café-lined borsa area, icecairo has quickly built a loyal following.

“Icecairo is bringing together people from different backgrounds and even different nationalities who have the same way of thinking when it comes to the environment and sustainability,” says Hossam el Zayat, CEO of the solar panel startup Sunergy.

An electrical engineering student at Cairo University also said that networking opportunities lead him to icecairo.

The space’s major challenge moving forward won’t be convincing the community to embrace change, but rather, carving out a financial framework. The organization is officially registered as a limited liability company (LLC) based on a social entrepreneurship model.

“We wanted to be independent and we also wanted to be a not-for-profit business, but there’s no framework for that in Egypt,” Radwan says. “The closest are NGOs and co-ops, but both of these have so much legal structures [sic], red tape and bureaucracy that it stops their work.”

When the GIZ funding runs out, it will need collect enough fees for services such as the co-working space and fab lab to remain sustainable. This presents a particular challenge because many young people can’t pay.

“We don’t want our end users, which are Egyptian youths, to be bearing the cost of these services while they’re trying to become entrepreneurs, we decided to approach companies to sponsor these coworkers,” Radwan says.

The cost of using machinery is still prohibitively expensive for many, but trainings in the fablab have become more frequent. The laser cutter has been used to make a few products such as an LED lighting kit with an Islamic design, Christmas ornaments, coasters and signs.

“We would like to be a maker movement,” Radwan says. “Thus the fablab running is huge.”

Radwan also hopes that icecairo will become self-organized with a virtual space that allows members of the community to give their own workshops, along with an open source forum where members can disseminate knowledge. Already, an NGO is using icecairo’s blueprints for building a solar water heater in order to host trainings and start manufacturing heaters.

Becoming a decentralized organization will involve streamlining the hub’s current processes, and yet Radwan is adamant that this shift will spur effective change.

“We would like to be open source and collaborate on projects,” he says. “Hoarding a product to yourself often leads to inaction.”