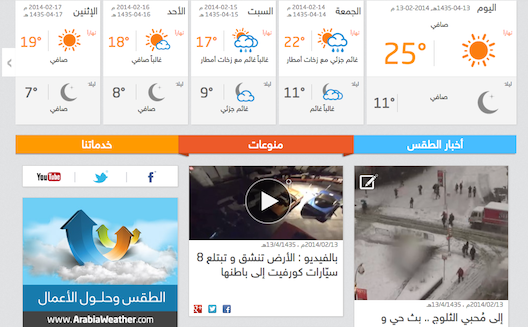 ArabiaWeather.com is not the company that it was even just nine months ago.

Since its early days as JordanWeather.jo, the company been a rarity among its peers: a startup whose data is its primary asset. Today, the company has quietly morphed into one of the region’s largest content portals, now the 8th most popular site in Jordan (briefly becoming more popular than Yahoo), with around 1.2 million unique visitors a month- 50% of its traffic- coming from Saudi Arabia. Suddenly, the weather is not just a detail; it’s a commodity that could catapult this Amman-based startup towards regional success.

Last May, when Wamda chatted with founder and CEO Mohamed Al-Shaker, the weather-obsessed young scientist who first launched the site in high school, ArabiaWeather.com had almost 1 million unique viewers a month. Since then, the company has closed two investment rounds, and doubled its traffic with the help of its secret weapon: Chief Product Officer Yousef Wadi.

Wadi, who previously worked as Senior Product Executive at online publisher 7awi and at Yahoo before that, is a numbers man who can give Al-Shaker a run for his money when it comes to data obsession. Speaking quickly, flipping through charts, sporting a polo shirt and jeans, he looks as though he’d be just as at home in Palo Alto or Dubai as in Amman. He uses CrazyEgg to obsess over how readers use the interface, checks Alexa “constantly” to track how he’s gaining on his prior content employers, and trained his team to build the site in nodejs, a simplified version of Javascript, because the numbers dictated that its would be more robust and scalable.

This is all part of Wadi’s master plan to make the weather more exciting. “I was looking at weather.com, and thought, if we keep giving people numbers, numbers, numbers, [more viewers] are not going to come. We then thought more deeply about the definition of weather,” he explains. “Weather is, in fact, everything that surrounds you.”

To reach a broader audience, ArabiaWeather.com relaunched in August, and hired an editorial team of six who now publish 24 pieces a day- every hour, on the hour- on topics including what to wear in different seasons, photos of interesting destinations, and original pieces on weather conditions at global events.

The site still offers technical articles about weather analysis, “because we don’t want to lose our geek community,” Wadi says. But, he emphasizes, “Our content rule is if my grandfather doesn’t understand the content, we’re on the wrong track.”

That’s not to say that ArabiaWeather.com’s sudden rise in Saudi Arabia is due solely to a knack for making viral content; data remains the company’s backbone.

A stroll around the office makes that clear; next to the editorial team, which is mostly women, sits a crew of guys in various shades of grey: the weather analysts, who appear to spend a lot of time etching formulas on the startup’s glass walls and whiteboards. ArabiaWeather’s weather prediction algorithms, which have over 2,450 parameters, crunch raw data from 13 unique weather stations in Jordan, using processing power rented from supercomputers in Slovenia and Helsinki.

The analysts then tweak and interpret those predictions; that's how ArabiaWeather.com is able to be faster, more accurate, and more local than its competitors, explains Al-Shaker, who looks almost professorial in an argyle sweater and wool flat cap.

Most existing media stations show Saudi Arabia to be “a dry desert,” but the fact is that “they have active weather all year,” Shaker laments, describing that it has cold spells, rains, and dusty conditions that generic global websites are not designed to report on. Global reporting is so bad that Google's weather widget once reported 22 degrees Celsius and light snow, when it wasn't set to snow whatsoever, he recalls.

With its own weather stations in Jordan, licensed data from stations in Saudi Arabia, original algorithms, and unique access to regional satellite data, ArabiaWeather.com is able to offer weather predictions for each square kilometer, Al-Shaker says.

Despite their progress, the two ArabiaWeather.com founders show no signs of slowing. After using the website to demonstrate the power of their brand, they plan to turn their focus back to B2B business deals, selling their data and custom 3D maps to aviation companies and television stations. Thus far, they’ve already made deals with “several TV stations in Iraq” and Ro’ya TV in Jordan.

They hope to tackle the Arab world before any external markets. However, Wadi says, catering to the needs of in-region travelers is important. “A lot of people in Saudi Arabia want to go to Turkey, so we get a lot of questions about weather in Istanbul,” he hints.


Disclosure: ArabiaWeather is a portfolio company of MENA Venture Investments, which shares management and investment resources with Wamda Capital.