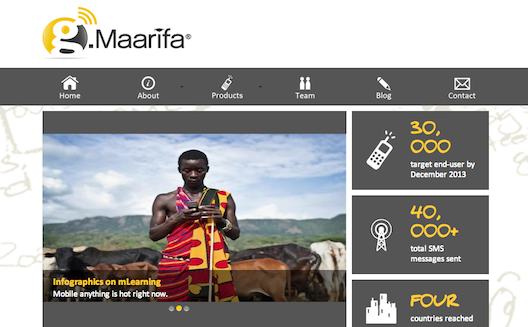 The trouble with skill trainings in Kenya is that the workers who need it the most don’t have time to attend, Evanna Hu tells me over coffee in a bustling café in Amman, Jordan.

“They’re hustling to make a living,” she explains. Mostly working throughout the day in the informal economy, selling vegetables and other goods on the street, they often simply don’t have time to go to the seminars that local NGOs and aid agencies offer.

That’s where g.Maarifa comes in. Hu’s startup aims to tackle one of the planet’s largest challenges – youth unemployment – with an SMS-based platform that offers job training, evaluation, and placement from any location.

In a country where the 40% unemployment rate has been called a “ticking time bomb,” and where 70% of the unemployed are between the ages of 15 and 35, changing the status quo will mean reaching potential employees on their own schedule, with a method that doesn’t necessitate internet access, or even 3G, Hu says. For those who are not just unemployed but also underemployed, SMS training may be one of the few viable routes for accessing a new future.

Hu, an Asian-American entrepreneur who has lived on four continents, seems fully at home rolling up her sleeves to work on a potentially global solution to a critical issue. After graduating from the University of Chicago, when she first began working in Kenya, she and her business partner went to work to build a data-driven solution that could interleave instruction, test questions, and evaluation into SMS trainings, while tracking learning with 36 different metrics.

In June 2012, after three months of development, the two founders and their team of 10 launched a minimum viable product in the Kenyan market. Two months later, they had around 3,000 potential trainees on the waitlist. “Organizations began coming to us, saying, ‘We hear you have a great platform. Can we adapt our trainings for SMS?’” Hu recalls. A movement was born.

Today, g.Maarifa, which is named for the Swahili word for 'knowledge', has sent over 40,000 SMSs and served multiple international clients, including NGOs, banks, and companies in advertising, telecommunications, and insurance. While the startup continues to offer soft skills trainings in retail, youth empowerment, and financial literacy, it has pivoted to focus on a B2B white label platform. Orion, as the platform is known, allows businesses to conduct their own education programs and trainings via mobile, with a format that g.Maarifa helps customize. Thus far, g.Maarifa has placed the top 10% of its graduates in jobs.

The idea may be deceptively simple, but with a focused team, the SMS-driven startup is poised to take over East Africa and the Middle East. From its hub in Nairobi, the startup has bootstrapped its initial seed investment to expand into East Africa and Tunisia; Jordan, Palestine, Lebanon, Egypt, Morocco, Algeria, Tunisia, and Libya are next. This month, the founders are in talks with a handful of corporations and organizations in the region, including Ruwwad MicroVenture Fund, a Amman-based platform that supports entrepreneurial initiatives.

The company also plans to continue expanding within Sub-Saharan Africa and expand into India and possibly Latin America. “We have first mover advantage in a hot space,” Hu points out. “We want to get there before our potential competitors do and in a sense, define the market.”

Indeed, the startup doesn’t have any immediate competitors in the Arab world; its most well-known potential competitor, Ramallah-based Souktel, does not conduct trainings, instead using SMS to match job seekers directly to employment.

However, Hu is well aware that g.Maarifa’s future competitors will be companies that don’t even use SMS. While only 8.3% of the population across the Middle East and Africa currently use smartphones, that number has doubled since the end of 2012 and is set to continue growing, according to eMarketer. Total smartphone use will rise to an estimated 48% by 2016, according to Discover Digital Arabia.

As more and more users go “straight to tablets,” Hu says, g.Maarifa is already planning mobile and tablet applications to bring its current customers “to the next stage,” especially as the company expands into the Gulf.

Hu hopes to smash potential competition with a focus on excellent customer service. “I’m crazy about Tony Hsieh and Zappos,” she reveals. Drawing cues from her idol, Hu has set policies to ensure that g.Maarifa responds to clients within eight hours, and immediately resends SMSs that trainees have accidentally deleted.

The company’s biggest asset might not even be its data or software, but the founders’ fierce dedication to solving one of the world’s largest quandaries. By forming partnerships with the University of Chicago, University of Toronto, and MIT’s Sloan School of Management, Hu and her team attracted a steady stream of whipsmart volunteers ready to advance a technology whose time has come.